Paul Hawken on Why Ecosystems Rely on Migration

“Let’s start indoors. Let’s start by imagining a fine Persian carpet and a hunting knife. The carpet is twelve feet by eighteen, say. That gives us 216 square feet of continuous woven material. Is the knife razor-sharp? If not, we hone it. We set about cutting the carpet into thirty-six equal pieces, each one a rectangle, two feet by three. Never mind the hardwood floor. The severing fibers release small tweaky noises, like the muted yelps of outraged Persian weavers. Never mind the weavers. When we’re finished cutting, we measure the individual pieces, total them up—and find that, lo, there’s still nearly 216 square feet of recognizably carpetlike stuff. But what does it amount to? Have we got thirty-six nice Persian throw rugs? No. All we’re left with is three dozen ragged fragments, each one worthless and commencing to come apart.”
–David Quammen, Song of the Dodo
*

David Quammen’s oft-told analogy describes what happens when ecosystems are fragmented by roads, fencing, overgrazing, farming, suburbs, and development. Between 2001 and 2017, approximately 24 million acres was lost to development in the US. Highways and freeways that connect suburban tracts pose existential challenges to animals that need to cross. Anyone who has tried to walk or run across a busy thoroughfare at night can imagine the risk for a bear or deer. The result of habitat fragmentation is slow-motion devolution and species loss, a pathway to eventual extinction. What might this have to do with climate and global warming? Everything. Let’s start with the true carpet.

Whether it is flocks of sandhill cranes fleeing Wisconsin’s White River Marsh in mid-October or the great ungulate migration of 1.5 million wildebeest, as well as hundreds of thousands of zebras and gazelles, moving through the Serengeti, the movement of animals across plains, over mountains, and through the skies is crucial to the preservation of native habitat worldwide. Ecosystems are classified by communities of plants and animals that dwell within. Every community is different, all are complex, and all are threatened or at risk.

Terrestrial and coastal ecosystems contain more than three billion tons of carbon, nearly four times the amount of carbon contained in the atmosphere. Three decisive actions are required to stop global warming. First, reduce and eliminate emissions from fossil fuel combustion. Second, sequester carbon into the soil by photosynthesis in grasslands, forests, farmlands, mangroves, and wetlands. Third, protect the carbon here on earth. If we forgo habitat protection and focus solely on fossil fuel replacement, it will be for naught. A 15 percent loss of terrestrial carbon could result in a one-hundred-parts-per-million increase in atmospheric carbon dioxide. Establishing wildlife corridors is crucial to preventing that loss.

We do not need a reason to save the elephant, wolf, tiger, whooping crane, and hundreds more species. That they exist at all is reason enough.

Wildlife corridors are pathways in water, land, and air in which birds, mammals, invertebrates, reptiles, and insects migrate, feed, drink, and move to and from connected habits. Corridors preserve sufficient habitat so that a given species can complete their cycle of life, a lifespan that can range from two to one hundred years, depending on whether it is a hummingbird or a tortoise. They connect patches of isolated habitat and allow species to flow and migrate. Without them, species can’t follow food and water sources and are at risk of genetic isolation and local extinction. Up to half of the planet’s plant and animal species in the world’s most biodiverse regions could be extinct by the end of the century due to global warming. Corridors that lead to a cooler climate provide species a lifeline to outrun rising temperatures. Reconnecting habitat corridors in the western United States on 75 percent of land area provides routes for animals to move and adapt to climate disruption. As birds, insects, reptiles, and mammals travel through corridors, plants and trees get pollinated, and their seeds get dispersed. Habitat connectivity increases genetic diversity and resilience within a population, which increases the ability of a species to adapt to changes caused by global warming.

We do not need a reason to save the elephant, wolf, tiger, whooping crane, and hundreds more species. That they exist at all is reason enough: these creatures embody extraordinary evolutionary qualities, intelligence, and beauty. What we might miss is that when we “save” the elephant, or virtually any species that depends on an intact ecosystem, whether it be a beetle or a bear, we benefit. It saves us—literally. Protecting the viability and resilience of planetary ecosystems is crucial to human existence and the effort to stabilize greenhouse gas emissions and reverse global warming. Wildlife corridors, habitats, and biodiversity are not a separate problem with respect to global warming. The biosphere creates the atmosphere and the atmosphere creates the biosphere. They are inseparable.

Globally, land conversion, human population growth, physical barriers, and agriculture have strained habitats from the wetlands of the Midwest to the rainforests of Asia and the boreal forests of Canada and Russia. Indonesia’s rainforests, home to rhinos, tigers, elephants, and orangutans, is fragmented because of palm oil production for potato chips and Halloween candy. The border wall between Mexico and the United States blocks bighorn sheep, wolves, and ocelots from their ranges, and cut through Native American gravesites, six national parks, five conservation hotspots, six wildlife refuges, and numerous other wildlife and conservation areas, including the National Butterfly Center, which is home to two hundred species of butterflies.

When species disappear, ecosystems deteriorate. As unraveling progresses, more species are lost, until you have scattered biological fragments that fail to support the inherent complexity of a living community. In a given ecosystem, birds, mammals, frogs, bats, reptiles, trees, plants, fungi, fish, and marshes form active relationships, networks that are dynamic, symbiotic, and intricate. When creatures large and small go missing, plants falter. The loss of diversity in plant and animal communities accelerates losses in the other. When ecosystems diminish, declining biomass releases its carbon stores. As plant communities wither, wetlands disappear, pollinators recede, soil becomes parched, and more carbon is emitted. The carbon oxidizes—it becomes carbon dioxide.

As of the mid-2000s, 58 percent of elk migratory routes, 78 percent of pronghorn migratory routes, and 100 percent of bison migratory routes were blocked by human development in the Greater Yellowstone Ecosystem. Stuart Schmidt of South Dakota is a fourth-generation farmer and rancher. By managing his cattle to mimic the natural herd movement of the Great Plains, he encourages native grasses and flowers to cover the topsoil across his pastures. The increase in diversity of plants and grasses has resulted in more diverse insects, leading to more diverse birds and mammals. The nature-mimicking grazing leaves residual grass for deer and pronghorn to sustain themselves through the winter migration. Managing the grass and restoring it to its natural state allows the Great Plains’ species to share the grassland and migrate seasonally.

Migratory songbird populations traversing back and forth from the United States to Mexico have plummeted by more than 50 percent since the 1960s. There are many reasons for the decline, but habitat loss is foremost, in their nesting grounds, wintering grounds, and everywhere in between. There are three billion fewer songbirds in North America than in 1970. The greatest losses have befallen the birds that breed in at-risk grasslands, where more than seven hundred million individuals constituting thirty-one species have been lost.

Aquatic corridors are crucial for the health of marine ecosystems. The California Current, flowing along the west coast of North America from southern British Columbia to the southern tip of Baja, Mexico, is one of the most important marine corridors on the planet. About thirty species of fish, marine mammals, seabirds, reptiles, and invertebrates that depend on the current are threatened, including the southern resident population of orcas, Pacific leatherback turtles, southern sea otters, short-tailed albatross, and chinook, chum, and coho salmon. Their migratory pathways are crucial not only to their own survival, but to the entire ecosystem of the Western Pacific.

The math is clear. We have lost five billion acres of forestland. Tropical forests, once 12 percent of landmass, are now only 7 percent. Marine corridors are threatened by warming, plastic, shipping lanes, pollution, and overfishing. America’s grasslands are disappearing faster than the Amazon rainforest. The Great Plains lost 2.1 million acres in a single year in 2018. Almost half of the world’s temperate grasslands have been converted to agricultural or industrial uses. The double glazing of the atmosphere with carbon dioxide deservedly is receiving a great deal of attention. The loss of intact ecosystems, their release of greenhouse gases, and the impact upon the atmosphere deserves equal publicity. This is not a problem looking for solutions; they already exist. It is a problem that is looking for awareness. 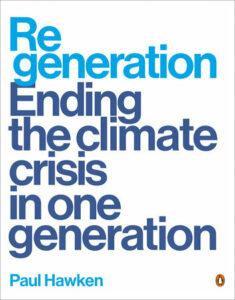 Paul Hawken is an author and activist. He has founded successful, ecologically-conscious businesses, and consulted with heads of state and CEOs on economic development, industrial ecology, and environmental policy. He has written seven books including four national bestsellers: The Next Economy, Growing a Business, and The Ecology of Commerce, and Blessed Unrest. The Ecology of Commerce was voted as the #1 college text on business and the environment by professors in 67 business schools. Natural Capitalism: Creating the Next Industrial Revolution, co-authored with Amory Lovins, has been referred to by several heads of state including President Bill Clinton who called it one of the most important books in the world at that time. He has served on the board of many environmental organizations including Center for Plant Conservation, Shelburne Farms, Trust for Public Land, Conservation International, and National Audubon Society. 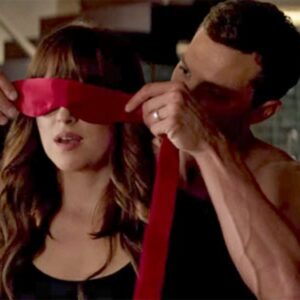 In 2009, an aspiring writer posted a novel’s worth of steamy, Twilight-based drama to FanFiction.net, under the nom de plume...
© LitHub
Back to top
Loading Comments...