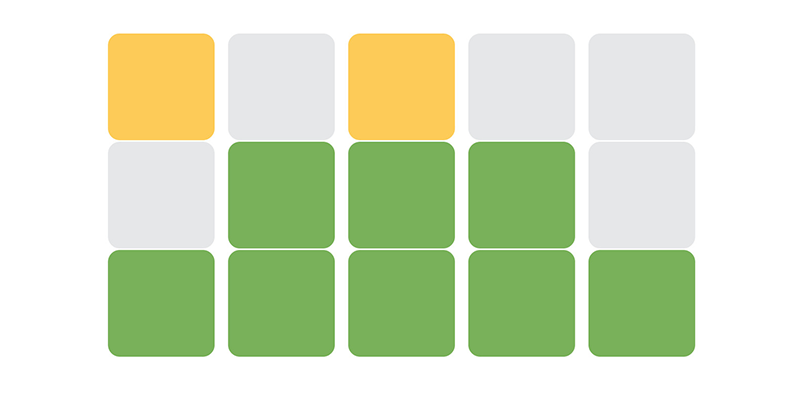 An ode to Wordle, our daily source of hope.

I don’t need to tell you that the internet is usually a horrifying black hole of garbage and bad news and people screaming. But every so often, something comes across everyone’s screens and makes a little community out of us. At the top of the pandemic, it was Tiger King and sometime in the past year, there was the “I’m not a cat” video. And now we have Wordle.

Certainly, you, Very Online reader, have seen people sharing little yellow, green, gray, and black squares on Twitter by now. Personally, not needing another distracting thing, I had avoided the game as long as possible, but this week, I finally gave in to the temptation and let the Mondriaan-like squares wash over me.

It is satisfying to look at, isn’t it?

A glorious 5-across, 6-down grid of possibility. For those living under the same rock as I was, the rules are simple: guess a 5-letter word, and the game will tell you which letters its word doesn’t contain (gray squares), which letters are correct but in the wrong place (yellow), and which letters are spot-on (green). You have six chances.

It’s an incredibly wholesome game, made even more precious by the fact that it was made for the creator’s puzzle-loving partner. It’s also a fascinating glimpse into the psychology of everyone who plays. What’s your strategy? What’s your start word, and is it the same each time? Are you one of those people who feels the need to brag about how few tries you needed, or is the quiet pleasure of besting your boyfriend during your lunch break enough? (Sorry, honey.)

Plus, the chosen 5-letter words are sort of weird. On the third day I played, the word was KNOLL. What a delight! It’s a word I’m almost certain I’ve never used before, but I would like to start using it more now. How fun is it that on a day this week, 3 million people were thinking of knolls?

For a game that’s so wildly popular and for an internet that’s usually so yell-y, I’m also amazed that the word of the day isn’t immediately ruined the second I wake up and start my daily doom-scroll. At least the people bragging on Twitter do it in a way that doesn’t spoil the fun. It’s like we’re all aware that we’re each hanging on by a thread, and that thread is this game, and this omission is the greatest human kindness we have seen in a while.

Because more than anything, Wordle gives us a little something to look forward to day after monotonous day. Is that not the embodiment of hope? Every new day brings six new chances to get something right.