How do I love thee, Valley of the Dolls? Let me count the whys.

My obsession with all things Valley began when I secretly rummaged through my mom’s dresser for her (carefully hidden between her slips and a hot water bottle) paperback copy of Jacqueline Susann’s notorious Hollywood and Broadway roman à clef. Having been a precocious kid and an insatiable reader, I’d already been to the sex/sin/salvation literary rodeo thanks to Harold Robbins’s The Carpetbaggers, Grace Metalious’s Peyton Place, and Rona Jaffe’s The Best of Everything. But from all I had heard, Jacqueline Susann’s novel promised to be those novels squared. It didn’t disappoint.

With Susann at the wheel, show business schadenfreude felt alluring, voyeuristic, and deliciously inside. No wonder Valley of the Dolls became a straight-up pop cultural phenom, the most talked-about, record-breaking bestseller of its era. The book was terrible, irresistible, hokey, hot, and, in its way, transgressive. And for me—a kid aching to bust loose from a leafy, straitlaced, idyllic, Lawrenceville-like New England small town—it was a road map. And a warning. The way people talked back then about Valley of the Dolls—on TV and radio, blasting it from church pulpits, whispering about it over the back fence, and sniggering about it at parties for grown-ups—a movie version just had to be inevitable.

And so, just in time for Christmas 1967, Valley of the Dolls, all glittery and glossy in Panavision and Color by Deluxe, opened, with a hand-painted ticket booth sign screaming “Adolts [sic] Only” in our neighboring city’s most cavernous, slightly faded movie palace. But that misspelled sign meant that the puckered, steely woman sitting in the ticket booth would never let slip past her judgmental gaze the freshfaced likes of me. Besides, like many locals back in a time when there were such now-quaint notions as shame and when some people took seriously the ﬁnger-wagging and dire warnings of the Catholic Church, I’d never want to be caught buying a ticket to the “dirty movie” our parish priest had been warning us about for weeks.

So, three pals and I piled into my heatless VW bug and drove 50 miles through freezing rain to Boston for a look-see at the notorious ﬁlm that critics were shredding but audiences were seeing in droves. My regular worship of moviemaking idols like Fellini, Lean, Hitchcock, Penn, Antonioni, Wilder, Bergman, and Kubrick would have to be put on hold for a bit. Valley of the Dolls promised to be a sizzling, steamy, check-your-brains-at-the-door blast.

Hoo boy, this is going to be a weird, hot ride, we thought.

Outside the opulent Savoy Theatre, opened in 1928 and today the Boston Opera House, my friends and I queued up with several hundred other rain-pelted fellow stalwarts and thrill seekers. Gigantic lobby posters blared the hard sell. “The Producers wish to state that any similarity between any person, living or dead, and the characters portrayed in this ﬁlm is purely coincidental and not intended.” “Leave the Children Home!” “The Motion Picture That Shows What America’s All Time #1 Best Seller First Put Into Words!” Other posters offered teasing glimpses of a half-clad Patty Duke and kitteny Miss Peyton Place Barbara Parkins. Another photo depicted a fully clad Susan Hayward gritting her teeth and ﬂaring her nostrils while leaning backward as if executing some faintly bizarre interpretative dance position. Hoo boy, this is going to be a weird, hot ride, we thought.

It was. Just not the way we’d hoped.

Valley of the Dolls arrived in an era that had already brought us such adult fare as Blow-Up, Alﬁe, Bonnie and Clyde, Point Blank, Who’s Afraid of Virginia Woolf?, and Persona, in a pop culture that had already spewed out such satiric gems as Allan Sherman’s 1964 ditty “Pills” and the dark, driving anthem “Mother’s Little Helper,” the Rolling Stones’ ﬁnger wag at Valium, the middle-class woman’s pill of choice. By comparison, Valley turned out to be clumsy, tone-deaf, unhip, quaint, unintentionally hilarious, and strangely unsexy. Aside from a meant-to-be-shocking naughty word dropped here and there, the movie played like a mash-up of dozens of old movies I’d already seen on The Late, Late Show starring, oh, say, Doris Day, Ida Lupino, Joan Crawford, Bette Davis, or Susan Hayward. Mesmerizingly hapless as it was, though, its gloriously entertaining badness grabbed me by the collar.

The movie was funny and sad. Tacky and noble. Hokey and moving. A lovable, irresistible train wreck. It got under my skin and stayed there. And Valley of the Dolls has woven in and out of my life ever since. In 1993 my coauthor Edward Margulies and I vaulted it to the very top of our pantheon in the celebratory book Bad Movies We Love. Then, in the mid-2000s, after happening on a script I’d written for a European producer, a ﬁlm production company brought me in for early meetings to discuss the possibility of my writing a new Valley of the Dolls movie.

My pitch for the opening images of the ﬁlm was a riff on Norma Desmond by way of Peg Entwistle. Suicidal and strung out, superstar-on-the-skids Neely O’Hara teeters in high heels to the top of the Hollywood sign. Once there she lets loose with a scathing indictment of the business and the people who did her wrong; below, rabid newscasters live-broadcast her meltdown, jostling and trampling one another to move their cameras into the best position to catch her fall. And that was just the opening. Apparently, my approach was Nathanael West–, Billy Wilder/I. A. L. Diamond–, and Douglas Sirk–esque enough to encourage the company to inform me that they had begun conversations with Carrie Fisher’s agents about the possibility of our collaborating. Carrie never showed up for either of two prearranged meetings, but then again, I never knew whether or not the Carrie talk was for real, let alone whether or not the company even had the rights to do anything with the material. The ﬂurry of phone calls and meetings soon stopped. Somehow the whole thing dissolved, as these things can.

Jean Cocteau famously called himself “a lie that always speaks the truth.” Valley of the Dolls embodies Cocteau’s credo.

Between the publication of Bad Movies We Love and Carrie’s purported no-shows, though, I had big fun constantly luring new, unsuspecting victims into the Valley. At a special showing one 1997 night at the Los Angeles County Museum of Art, among the Valley virgins was Sharon Stone. The audience—some, including Courtney Love, in Jacqueline Susann tribute outﬁts or full-on Valley of the Dolls drag—howled, recited the dialogue, wept, cheered, and popped candy “dolls” along with the heroines on-screen. Stone was so fascinated by Sharon Tate’s hair and makeup that she adopted the look for her role in the Martin Scorsese–directed Casino that same year, and she looked sensational.

Several other of my Valley revisits were in the company of a brilliant, caustic fellow writer and friend, who was a second-generation Hollywood brat. These were some of my richest, funniest encounters with the movie—until they became the most painful. With each viewing, I saw this friend, whose favorite Valley girl was Neely O’Hara, grow more and more destructively dependent upon prescription drugs. No matter how many of us tried to help in dozens of different ways, our pal became combative, unreliable, and unemployable before eventually spiraling toward an early death.

Jean Cocteau famously called himself “a lie that always speaks the truth.” Valley of the Dolls embodies Cocteau’s credo. I wanted to write about a movie that had so much going for it behind the camera, had so many reputations riding on it, and yet ran deliriously off the rails. The passage of time since my ﬁrst encounters with the Susann universe and the joyful process of researching, interviewing those who were there (or nearby), and writing this book have revealed more than I ever bargained for. Valley—as soapy, gaudy, ridiculous, and gonzo as it is—delivers its payload as a cautionary, prescient tale of the perils of prescription drug use right alongside its melodramatic trappings that make it a mink-and-mascara-lined kitsch milestone.

It’s rife with clichés, tacky platitudes, and melodrama, yet it still exposes truths about the callousness and cruelty of the Biz, about aging, about how the deck is stacked against women, about losing one’s way and struggling to ﬁnd the road back, and about the steep cost of fame. It also presages the endlessly self-promoting, self-reﬂexive, celebrity-obsessed culture we have become.

Maybe the next time I’m asked, Why Valley of the Dolls? I’ll just smile, shrug, and paraphrase a deathless bit of screenwriters Helen Deutsch and Dorothy Kingsley’s dialogue: “I know it’s a rotten movie—but I love it!” 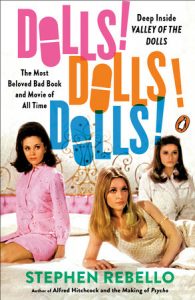 Stephen Rebello is a screenwriter and author of the bestselling Alfred Hitchcock and the Making of ‘Psycho‘. He has written screenplays for Disney, Paramount, Focus Features, and others. His other books include Reel Art and Bad Movies We Love, written with Edward Margulies, and he has written for GQ, Playboy, Movieline, Hollywood Life, Statement, More, and Cosmopolitan. Born in Massachusetts and a resident of Southern California, he is a contributing editor at Playboy. 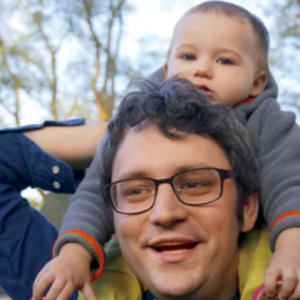 This week on The Maris Review, Jayson Greene joins Maris Kreizman to discuss his memoir, Once More We Saw Stars, out now in paperback...
© LitHub
Back to top
Loading Comments...