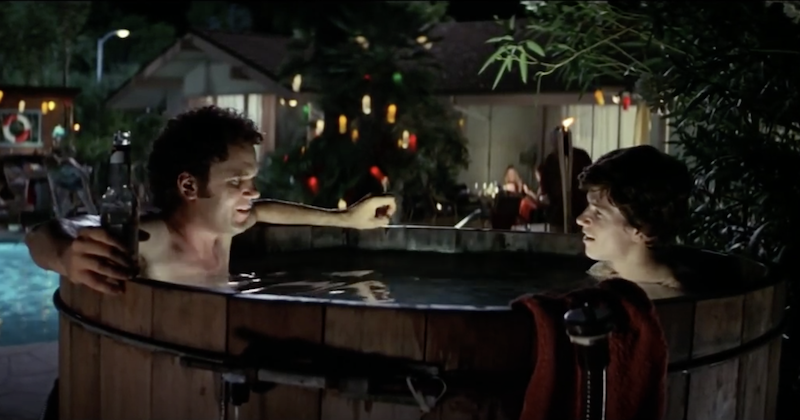 The poem’s hilarious for many reasons: the potential innuendo that turns out to be literal and thus spatially confusing (going down the sugar tree?); the reader’s cadence of “playing, playing”;  the problem-solve of why the bees don’t sting. And it’s also kind of good. The idea of bees playing (rather than buzzing or working) is surprising, and it’s sweet and sincerely delivered.

But I also love the beats after the poem. Reed is embarrassed, lowering his head, ready to say that it’s not that good. But despite the poem’s humor, Dirk doesn’t laugh. He’s amazed, smiling: “That’s fucking great, man, did you write that?” Receptiveness, enthusiasm, being taken seriously despite one’s credentials—it’s the ideal response. If this happened more often, maybe more bros would be sharing poems in hot tubs.

A different movie might punish Reed for his vulnerability. But this is the wonderful thing about the world of Boogie Nights: ideas always have legs, because the characters are generous to each other. No one shuts down an idea before it has a chance to get made, and—maybe because of this—the ideas are usually good. Dirk Diggler’s name comes to him in a flash of inspiration, and it’s actually amazing; their director approves Reed and Dirk’s insane pornographic buddy action movie Brock Landers: Angels Live In My Town, and it becomes a hit. What a nice world to spend time in! The goal is to create great art, and because you’re surrounded by support, you might actually have a shot at making it. Let all our poems be received with this much kindness.