"Poetry is part of the mechanics of living."

“Poetry is part of the mechanics of living,” Gaël Faye tells a classroom full of slam poetry students on the Upper East Side of New York, on a recent afternoon in October. One boy perches intently on the stage above Faye’s shoulder. Another has brought his trumpet. Several children creep shyly around Faye’s feet, eager to share with him their poems and piano lessons. It is easy to understand the students’ excitement: At well over six feet tall, with a strikingly lanky build, curly hair and freckles, Faye radiates the calm, fluid energy of a hip hop artist who is something of a superstar. He has been writing poems his whole life, and he listens to each of the students with genuine interest. “To write is to be a faucet that is always running,” he insists, gesturing with his hands as he speaks. “To write is to run. You cannot be too intellectual about it.”

Faye is at the end of a whirlwind tour around the United States, promoting the English translation of his 2016 novel, Small Country, the popular success of which he says he has had a hard time keeping up with. The story is based on his own experiences of growing up

métis (mixed race—he is French-Rwandan) in Bujarumba (the capital of Burundi), as well as the civil war and genocide that forced his family to flee to Paris in 1995 when he was 13. He wrote the novel at the prompting of Parisian editor Catherine Nabokov, who first became interested in Faye’s talent for rhyme and narrative when she heard her teenage son listening to his music. She reached out to Faye to ask if he could write books, too. As it turned out, Nabokov’s instincts were right: Small Country has won several prestigious literary prizes in France, including the Prix du premier roman français and the Prix Goncourt des lycéens. In 2016, the book sold over 700,000 copies in the French-speaking world alone, and it is currently being adapted into a movie.

This interview took place in the lounge of the Empire Hotel at the Lincoln Center, where a truly fascinating nexus of cultural organizations, including the French Embassy and Faye’s book editor, had arranged for him to stay during his tour.

Rachel Veroff: Do you teach a lot?

Gael Faye: I don’t teach often, but for a few years I have enjoyed working with young people. Right now I am working with a group of kids in Paris. During the whole year, I teach them how to make songs. It’s not at a school, these are kids who come from everywhere. I have done a project with rom (Romani) children who were living in a camp in France. They were living in difficult conditions. For one year, I worked with them to put together a show. It was about exile. Voilà. I teach from time to time. But it takes a lot of energy, so it’s hard to work with kids alongside creating art. Teaching is a recreation for me. It’s a pleasure. I like the energy of young people.

RV: Back when you were still just making hip hop, could you have imagined this literary success?

GF: I never could have imagined this. Even when I was writing the book, even when the book was done. I did not imagine this. Nobody does. Rap is a particular form, with its own connotations. People don’t always listen to the words. They stop at the music. But what I was rapping about at that time, there were themes that I have also approached in the novel. The novel doesn’t talk about hip hop, but it does talk about exile, and childhood, and Burundi, and Rwanda. In my music, I was on themes that weren’t working in that form. So the reception of the book surprised me. But also: I am the only writer who is doing this. I am the only writer who comes from Rwanda and Burundi, who travels to speak about it. Nobody else is doing that. It’s weird. I’m like an ambassador.

For me, this is my story. It doesn’t have to do with the fact that I’m an artist or not. It’s my story. I lost family in the genocide.

RV: In the book, Gabriel’s sister Ana grows up to have no interest in returning to Burundi. Why does Gabriel want to go back? Why did you want to write about this subject?

GF: It’s a subject that comes from my own lived experience—exile, the impossibility of returning. Ana does not want to return to Burundi because she lost her father, and she lost her mother. The country of her soul is associated with a moment too difficult in her life. There are people who have this strength, like Ana, to turn the page, to not look back. I have met them: People who say, “I was born there, I grew up there. But it was so difficult, I will never go back.” And then, there are people like Gabriel, who live in suspension. What I mean to say is, he comes from one place, and he arrives in a new place, but he is not really in the new place because his soul is still in the other place. That moves me, this manner of being. People who live their memories. I find it touching. Especially the way people are able to manage it.

For Gabriel, it’s that he returns to Burundi. And he says, “I don’t return to re-install myself, I return to close a door that I left open.” It’s true that exile can resemble this. You left a door open, and you seek to close it. Some people manage to close the door, some people never manage. What’s even more beautiful is when Gabriel says, “I will stay here. I will take care of my mother.” He begins to see how to finish the story. For me, this is a process that is healthy.

RV: What is the difference between “exile” and “dépaysement”?

GF: Dépaysement is less strong than exile. It’s like, you live in San Francisco, you move to New York. If you feel off about it, you say, “I am displaced.” You can be displaced in yourself at only a few kilometers away. For me, dépaysement is more a direct rapport with the environment. Exile is a much stronger internal emotion. Dépaysement is a mood. Dépaysement can be about the time it takes you to acclimate.

RV: You live in Rwanda now with your wife and kids. Are there many resources for artists?

RV: In the book, I was moved by how Gabriel’s mother carries her grief. Is the role of the artist to help process trauma?

GF: For me, this is my story. It doesn’t have to do with the fact that I’m an artist or not. It’s my story. I lost family in the genocide. I listen to a lot of survivors. I know I am traumatized in a certain way. I know that my children will know it, too. We have tried to protect them. The fear of genocide can be transmitted almost just be speaking about it. For me, I was lucky to be more of a witness than a victim, which allowed me the power to articulate, to have a kind of distance from it. That is why I love the character of Gabriel. He also has this doubled way of seeing. He is an actor and a witness at the same time. To me, this is what it is to be an artist. You are not obligated to have lived the things to contribute some emotional understanding.

RV: When Gabriel finds his mother again, years after the war, she is wandering the streets and babbling. It’s heartbreaking. Why did you write the story this way?

GF: The mother is the hero of the book. When you first meet her, there is that first discussion with the father where she says she wants to go live in Europe. She says to her husband, “You are here, you profit from your place as a white man in this world. You see the beauty of the lake, but I know that under the lake there is a volcano and there is methane gas that will bubble to the surface. You see the beauty of the hills, but I know the misery that has run down those hills.” She is hurried because she is a refugee (from Rwanda, on the other side of the lake). Later, she is the one who asks her brother not to go to war. She says, “But what are you doing, going to war?” Then she is caught by the arrival of the genocide. In the end, her husband is passed over by the events. But she must assume this violence that she had wanted to run away from, that caught her anyway. Her brother is shot. The men end in prison, the men die. They die from combat or from being executed.

I went to Rwanda for the first time after the genocide. It was a country of orphans and widows. Rwanda is a country that rebuilt itself thanks to women. It was women who paid the heaviest price. Often in war, men get killed, but worse happens to women. Rape was

nom de guerre. Many women were infected by HIV. Gabriel’s mother represents for me the realness, the presence, of these women who survived—who were made to endure an extraordinary situation. At the beginning of the story, she is a woman who is not at all militant, not even partisan. To the contrary, she dreams of leaving, she dreams of having a life. It’s the story that catches up to her.

RV: Are there any questions you wish or expect people will ask you, but they never do?

GF: No, I don’t expect questions. I hope for an encounter, to meet people, to spend a moment. I don’t really hope for particular questions. In fact, when you are an artist, you cannot expect anything. You just create, and sometimes there is a miracle. People listen to what you are saying. But the reality for most artists is the indifference of the world. We do and make things, and people don’t care. Then one day, there is one person who takes interest, or two, or even a million. It’s a miracle. It’s a gift. It’s marvelous. But me, in my life, I don’t wait for anything. I don’t wait for any person. We die from waiting for things. You have to do things. Time goes so fast.

The fact that this story could touch people here, in this country. Or last week, I was on the book tour in Siberia. I was in Spain, Egypt, Morocco… I have arrived in so many countries, where people are touched by the book and always for the same reason. It speaks of their childhood. It speaks of what we are. It resonates. That is my happiness. To be able to live that. To have a conversation with you, here, in New York, about a child at the end of a road in Bujurumba.

Rachel Veroff's work has appeared in Guernica, Catapult, Vol. 1 Brooklyn and Music & Literature. She is an editor of Off Assignment, a magazine for behind-the-scenes journalism and literary travel essays. She works at the Lycée Français de New York. 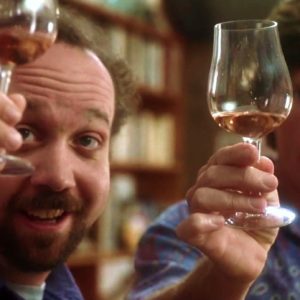 Wine has permeated western literature since the time of Homer. The Greek symposium was inevitably lubricated with wine, and Socrates...
© LitHub
Back to top