For Holiday Parties, Trivia Nights, and Beyond

The holiday (party) season is upon us. Assuming you’re likely to be lightening the doorsteps of many a literary event this winter (or at least an event where you can find one other lonely person to talk to about books), you’ll need to know how to properly drop the names of your favorite (and/or least favorite) writers. Thus, for your merry-making needs, a completely incomplete guide to oft-mispronounced author names and oft-unknown writer nicknames. The rest of the schmoozing (and boozing) is up to you.

Part One: 10 Traditionally Mispronounced Writer Names, and How to Pronounce Them

Vladimir Nabokov: na-BOE-kov. Or, commit to memory all of the possible pronunciations, as the man himself explained them in a 1965 interview, printed in Strong Opinions:

“It is indeed a tricky name. It is often misspelt, because the eye tends to regard the “a” of the first syllable as a misprint and then tries to restore the symmetrical sequence by triplicating the “o”—filling up the row of circles, so to speak, as in a game of crosses and naughts. No-bow-cough. How ugly, how wrong. Every author whose name is fairly often mentioned in periodicals develops a bird-watcher’s or a caterpillar-picker’s knack when scanning an article. But in my case I always get caught by the word “nobody” when capitalized at the beginning of a sentence. As to pronunciation, Frenchmen of course say Nabokoff, with the accent on the last syllable. Englishmen say Nabokov, accent on the first, and Italians say Nabokov, accent in the middle, as Russians also do. Na-bo-kov. A heavy open “o” as in “Knickerbocker”. My New England ear is not offended by the long elegant middle “o” of Nabokov as delivered in American academies. The awful “Na-bah-kov” is a despicable gutterism. Well, you can make your own choice now. Incidentally, the first name is pronounced Vladeemer—rhyming with “redeemer”—not Vladimir rhyming with Faddimere (a place in England, I think).”

J.M. Coetzee: kut-SEE-uh. I had many arguments about this one in bars in college, but one of my professors set everyone straight.

Ayn Rand: It’s pronounced “ine,” like “eye” with an “n” at the end. Though actually I support mispronouncing her name, if only to haze her ghost.

Michel Houellebecq: Like “wellbeck.” It’s French; say it with champagne.

Henry David Thoreau: This seems deeply absurd to me, but apparently, it’s pronounced THOR-oh, same as the word “thorough.” Everyone alert your high school English teachers.

Jonathan Lethem: If you, like me, have been saying “Jonathan Leh-them, Lee-them” every time you mention him, you are now freed. It’s the latter—LEE-thum.

Jodi Picoult: Though she’s not French, you should pretend that her name is: raise your baguette and say Jodi PEE-koo.

Part Two: 10 Nicknames of Authors, for Pretending You Guys Are (or Were) Total Besties

J.D. Salinger, though he was called “Sonny” as a kid, grew up to call himself a much more civilized Jerry.

Edna St. Vincent Millay—whose middle name comes from St. Vincent’s hospital in Greenwich Village—went by “Vincent” ever since childhood. Apparently, the principal of her grade school did not approve, and refused to use the name, instead calling her any woman’s name beginning with “V” that sprang to mind.

J.M. Coetzee (in a repeat appearance) is called John.

Calvin Trillin is known to friends and family as Bud.

J.K. Rowling‘s full name is Joanne, but she goes by “Jo.” Also, NB that her last name is pronounced like “rolling” (not “RAU-ling”) which gives that nickname some nice internal rhyme, and also kind of makes her sound like a famous boxer.

If you’re looking to call out the name of E.L. James—better make it “Erika.”

And of course, the venerable Edmund Wilson is better known as “Bunny.” 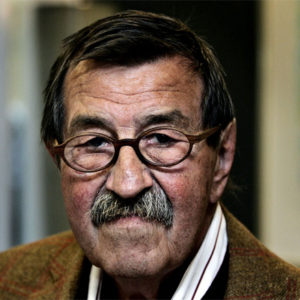 Translated by Breon Mitchell. TO PASS THE TIME Reread books you finished long ago, deliver indignant diatribes, redate...
© LitHub
Back to top