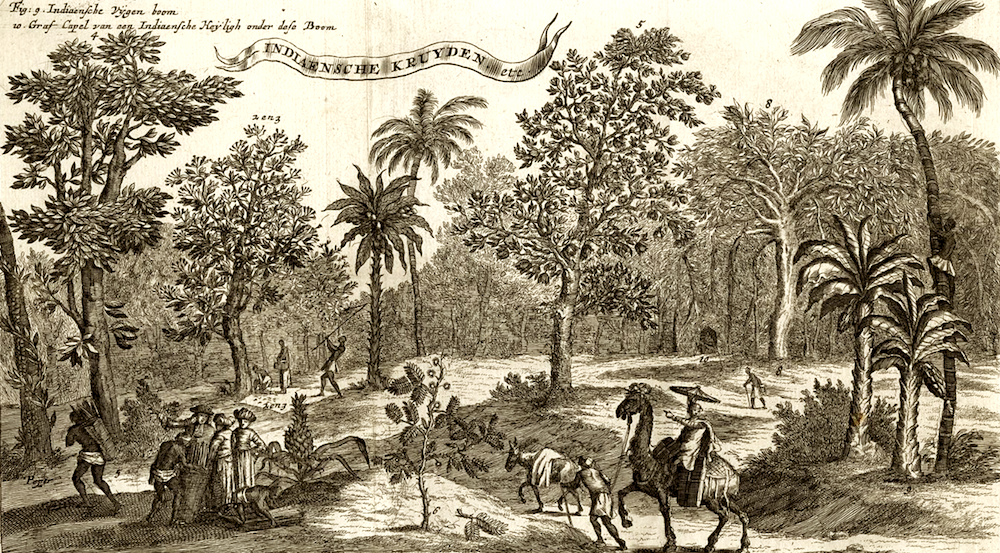 Reading Amitav Ghosh’s work these last few years, I’ve felt an eerily exciting sense of gratitude. Someone else out there—someone way smarter and more erudite than me—appeared to be chasing the same demons that I was, searching out the beginnings of the climate crisis and the mass extinctions that now afflict our planet, finding them hiding in plain sight, in the converging axes of colonial conquest and capitalist extraction that continue to define our world. Ghosh’s latest, The Nutmeg’s Curse: Parables for a Planet in Crisis, is a work of extraordinary breadth, depth, and brilliance. We spoke about it over email last month.

Ben Ehrenreich: Most accounts of the current ecological crisis begin in Europe, and often just in England, with the turn to coal-fueled industry. The Nutmeg’s Curse begins 200 years earlier on the other side of the planet, with an act of genocidal violence at a Dutch East India Company outpost in the Banda islands. What is the significance of that shift?

Amitav Ghosh: Those narratives are misleading: as Priya Satia has shown in Empire of Guns, it was the phenomenal growth of the English armaments industry that seeded the innovations that led to the Industrial Revolution. The growth of the armaments industry, in turn, is directly traceable to England’s colonial wars in Ireland, the Americas and Asia. In that sense the Industrial Revolution is itself a product of European colonialism. It was the exceptional violence and savagery of the European conquest of the Americas that made it possible for Europeans to think of “Nature” as a bundle of inert “resources” that existed merely in order to be extracted for the profit of the conquerors.

BE: That’s a distinction that I found extremely useful, that the violence and exploitation preceded the ideological constructions that would—and still do—serve to justify and maintain them.

AG: As I see it, the idea that the Earth is an inert repository of resources that exists primarily to be exploited by (some) humans, had its origins in the apocalyptic violence that was unleashed by Europeans against their human Others in the Americas and Africa. In particular, it was the violent “subduing” of the people of the Americas that made it possible for elite Europeans to think of everything on the planet as being available for conquest, enslavement and even extermination, as happened in the Banda Islands. In order to gain control of the trade in the products of the nutmeg tree, the Dutch effectively decided to exterminate and enslave the entire population of the islands.

This represents, I think, a very important inflection point in history. In the Western imagination Genghis Khan is always held up as the supreme example of ruthlessness and cruelty. But Genghis Khan never set about exterminating the population of a place in order to seize its products. Nor did he extinguish flourishing civilizations, as Europeans did in the Americas: in fact he and his descendants were quick to adapt to the cultures of the places they conquered.

“It is no accident that climate denialism is strongest in the settler-colonial countries of the Anglosphere.”

With the conquest of the Americas, suddenly everything in the world is up for grabs, botanical species, minerals, and, of course, people as well. The nutmeg tree becomes a profit-generating machine to be planted wherever the colonizer pleases, and the people who have nurtured it over centuries become completely expendable. In that sense the Bandanese were among the first to suffer the “resource curse,” and today’s planetary crisis is nothing other than the unfolding of that curse on a planetary scale.

BE: Can you talk a little bit about the genesis of The Nutmeg’s Curse?

AG: Many of the book’s themes had been in my mind for a long time but it was only after my visit to the Banda Islands in 2016 that they began to come together. At that time I did not know anything at all, really, about what had happened in the Bandas in 1621; had I not traveled there I would not have become aware of that history. So you could say that The Nutmeg’s Curse was catalyzed by a particular place, or landscape. That is why perhaps its structure and form resembles that of your own Desert Notebooks.

I read your book with an almost uncanny sense of recognition: not only were we reading the same writers and thinking along parallel lines, our writing also seemed to mirror each other in their form, in that we were both discovering a landscape, and trying to use places as palimpsests to think about history and about the current state of the planet. This is something that Sven Lindqvist does with brilliant effect. The form arises out of an effort to learn from a place, rather than from abstractions.

BE: Thank you! I’ve had the same experience reading your work. There’s a question about the relationship of your novels to your recent essays that I’m not sure I know how to ask, except to observe that The Nutmeg’s Curse re-centers the history of modernity in a way not that different from the way the Ibis Trilogydid, which is to say not only by shifting the geographical focus, but by looking so intently at the maze of connections between histories and regions that the very notion of a center—or a periphery—begins to feel preposterous.

AG: The Ibis Trilogy completely changed how I thought about the world. I had always had a fairly skeptical view about standard historical narratives, but it was not till I started researching the trilogy that I discovered how much of what we are taught about world history is made up of half-truths and lies. Of course, as Immanuel Wallerstein once observed: “Ninety-five per cent of all written history before 1945, was that of five historical nations: Great Britain, France, the United States, the Germanies … and the Italies.” These were the nations that were said to be the dynamic centers of world history: they were held up to be the drivers of the world economy.

Yet much of the capital for the industrialization of Britain and the USA came from a drug, opium, grown mainly by the British Raj in India: through much of the 19th-century opium was the single most valuable trade commodity. In 1839 the British Empire even went to war against China to force it to go on importing opium. In the West, the opium wars were regarded as minor events, whereas in China they were seen as historical watersheds. And now, as China becomes ever more central to global events it is increasingly clear that the Chinese were right: from the vantage point of the present day the First Opium War appears every bit as consequential as the French Revolution.

The Ibis Trilogy is about exactly this history. It was while writing the trilogy that I also began to think seriously about forms of agency in botanical substances, like opium: this is, of course, a theme that I develop in The Nutmeg’s Curse. Humans have never been as much the authors of history as they like to think, not even the most powerful of them.

BE: Of course the Enlightenment understanding of history is based on that exclusion of the nonhuman—of everything that counts as “nature”—which is one reason I was so taken by your application of the science-fiction term “terraforming” to historical colonialism, specifically to the environmental interventions imposed by settlers striving to remake landscapes on a European model. This, you argue, should be understood as a form of warfare, one that, “lies at the heart of the planetary crisis.”

AG: That the word “terraforming” comes from science fiction, and is defined in reference to other planets, says something very important. Because, of course, the transformation of colonized landscapes (which is exactly what is implied by “terraforming”) is one of the most important aspects of settler-colonialism.

That mission was explicitly embraced by English colonists, as far back as the 17th century: they literally wanted to remake New England in the image of England. This entailed a complete transformation of the environment, part of which was achieved by explicit human interventions like the damming of rivers and cutting down of forests. But much of it was also accomplished through the deployment of non-human agents and entities, like livestock and pathogens, which were said to belong to a separate domain, “Nature.” The colonists knew perfectly well that they were actively transforming what they called “Nature,” yet they clung to the conceit that this was a domain that followed its own laws, impervious to human intervention. This allowed them to disavow responsibility for the ecological transformations that were being effected by their livestock, or by diseases. The idea of Nature served the colonists, in effect, as a tool for the “management of conscience” (to borrow a phrase from Priya Satia). Of course Native Americans weren’t fooled, but for the colonists the idea of Nature as an entirely separate domain was very important.

“I actually take a lot of heart from young people and the various activist movements that are now expanding around the world.”

This is why, I think, the concept of terraforming was not articulated until the mid-20th century, and then only in relation to other planets, even though the actual processes had existed for centuries, right here on Earth. The concept had to be actively repressed to preserve the efficacy of the idea of “Nature” as a tool for management of conscience. That repression has served its purpose very well. It is no accident that climate denialism is strongest in the settler-colonial countries of the Anglosphere. The denialists are disavowing their responsibility for the world-wide environmental changes of today in much the same way that their ancestors did.

BE: You suggest a few times in the book that with climate change and the Covid-19 pandemic, we’re seeing the Earth act with something that looks a lot like agency. Is this a metaphor, or would you take it farther than that?

AG: Well, consider another metaphor. When an elephant is sitting, or sleeping, it is possible for a man to stick a spear in its side and run away, at least for a while, because the elephant is a very large animal and takes some time to respond. On the scale of geological time, the interval between the prodding and the response would naturally take much longer—centuries in fact. And that is very like what we are seeing now; the elephant is chasing us and we can’t run fast enough.

I actually take a lot of heart from young people and the various activist movements that are now expanding around the world. This awakening owes a great deal, of course, to the activism of those who have historically borne the brunt of the suffering inflicted by European colonialism—that is, Indigenous and Black people. It is heartening to see what a tremendous effect the Standing Rock movement has had, for instance.

Particularly heartening for me is that these movements are not just narrowly political; they also advocate different ways of thinking about humanity’s relationship to the Earth. They envision the non-human world as being filled with vitality and agency. This is very encouraging.

Ben Ehrenreich is the author, most recently, of Desert Notebooks: A Roadmap for the End of Time and The Way to the Spring: Life and Death in Palestine, as well as of two novels, Ether and The Suitors. His writing appears regularly in The Nation, and has been published in Harper’s, The New York Times Magazine, and the London Review of Books, among other publications. 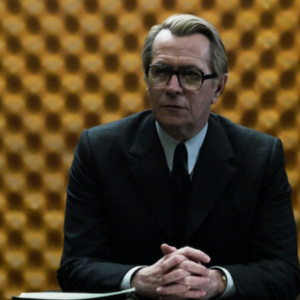 90 years ago today, in the English coastal town of Poole, David John Moore Cornwell—the man who would go on to become John...
© LitHub
Back to top