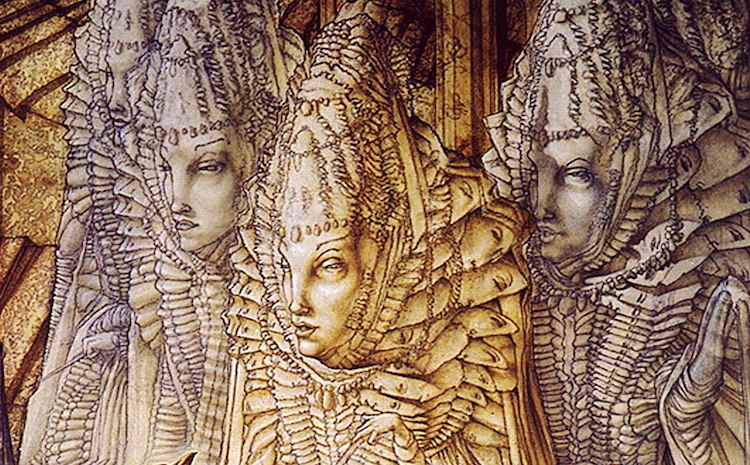 Few writers within the realm of nonrealist or “weird” fiction have created more original work than Michael Cisco, who over the course of two decades and several novels, including his critically acclaimed debut, The Divinity Student, has forged a singular path in creating visionary, phantasmagorical settings, uniquely alienated anti-heroes, and genuinely creepy happenings—while also exhibiting a healthy absurdism and dark sense of humor. The work he has created sits comfortably between that of Thomas Ligotti and Caitlin R. Kiernan, compares favorably to that of Thomas Bernhard and, yes, Kafka. In short, he is one of the most interesting writers I’ve encountered in the past 30 years.

In Michael Cisco’s The Narrator, the narrator Low is conscripted into an army to fight against the “blackbirds,” who possess lighter-than-air armor. But first, our hero must play a waiting game in a city of cannibal queens and uncanny dead things, with priests for both the living and the dead. The Edak, strange remnants of a mighty imperial power, must be avoided at all costs. Once his unit is mobilized, Low sets off on a journey that is by turns absurd, surreal, deadly, and one of the great feats of the imagination thus far in this century.

These feats depend on a layering that’s extraordinary for weird fiction and is given rare power by the attention to detail in the brilliant set pieces that Cisco strings together to tell his tale. I’ve rarely come across so many instances where I was simultaneously in the moment of the novel but also recognizing that I was encountering images and situations unlike any I’d ever read before. Sleepwalkers that bruise the skin of reality, assailants who skim the surface of the water in armor that’s lighter than air, guns that are not guns, conjurings with unexpected consequences, a huge ship “like a black egg,” refugees from an insane asylum who assemble as soldiers. “As if a giant were pushing us along the road, blithering to itself.”

Yet the true wonder of The Narrator is that in addition to the hauntings and unique marvels of the supernatural on offer, the novel is also an extended treatise on the negation of meaning that is war.  There are many battle sequences in The Narrator, and they all translate as action without meaning, sometimes so chaotic that even individual action is hard to discern within the movements. As near as is possible in text, Cisco conveys the jerky, roving, incomprehensible experience of men on foot shooting at each other across broken, often hilly ground. The individual meaninglessness of it and the group rationalization of it. The result is to come close to conveying the derangement required to wage war. “An army is a horror. It’s a horrible thing.”

But the uncanny and the hook of a powerful theme are rarely enough to sustain any novel. The next element at which Cisco excels is in creating characters like Saskia, a woman “all in armor” who “has a short sword with a basket hilt on her right side and a flapped holster on her left hip.” If there’s a hero of The Narrator besides Low, it is this battle-tested woman who never falters in her bravery under fire. She’s a deliberate counterpoint to the senselessness of war—an entity with a tactical purpose who brings order by simple focus. Saskia is also perhaps the only character who remains consistent from beginning to end, and in a sense she gains her own agency as narrator because of it. (But she’s not alone: Makemin, Nardac, Punkinflake, Thrushchurl. You’ll remember all of them. By the end, the book will be buried in your skull.)

What does Cisco layer on top of searing scenes of the uncanny and of war, in the context of unforgettable characters? A series of experiments in narration, eel-slippery. The narrator of The Narrator may not be the narrator of the entire novel. Where does his narration really begin and end? What to make of the asides between chapters? Of meeting another narrator, who in a sense begins to narrate the tale in a different way? What of the accounts of others, which the narrator narrates by adding notes like “an unhurried, slow inhalation” and “Her voice dropped there.” And “She caressed the air by her knees with stiff old hands, seeming to coax the guillotine blade out of the sparkling air so that I for a moment saw it.”

Should we be worried? I think instead we should relax into reading a work of true originality, verve, and intellectual rigor.