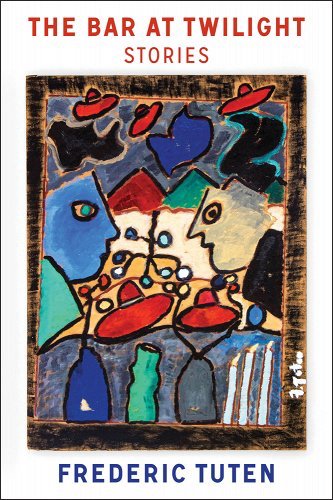 The following is short story from Frederic Tuten's new collection, The Bar at Twilight. Tuten is the author of five novels, the memoir My Young Life, and the short story collection, Self-Portraits: Fictions. Among other honors, Tuten has received a Guggenheim Fellowship and the American Academy of Arts and Letters Award for Distinguished Writing. He lives in New York.

Once the Western world looked one way, a one-way world, everything pointing back to itself; a tree or the artist’s mark representing it on some surface was just a tree staked out there on a plain or hill, or a road simply a road that went from here to there and there to here. These were times when such images gave sufficient pleasure, their presence reminding one of what was out there beyond one’s room, and spoke for the way we could transport or fix on a wall our surrounding world. There was no conception then, in this one-way world, of symbol, fable, parable, or allegory: All art was surface and pointed in one direction.

There must have been enough of the world to keep us busy with it in a direct way, not needing to imagine, say, that what we saw was not only the object or scene before our eyes but some idea other than, and in addition to, the object or scene represented.

It was only later that some artists discovered that a tree was also the Rood, Christ’s wooden cross, and that a road was also the path of life. They also found, especially after Christianity, that lambs, snakes, and doves doubled for things else. You could make a painting with a single tree on a hill bathed with lambs and a circling luminous dove and, voilà, you at once had a lovely landscape and a tableau portending Christ’s Crucifixion on Golgotha. Just remove the dove, put in groves of trees and other creatures, a lion or wolf lying beside a lamb especially, and arrange numerous birds and animals large and small in happy company and, presto: the prelapsarian Garden of Eden. Add a serpent wound tightly on a bough and now it was that same happy garden with a hint of its imminent doom and the Fall.

A landscape—art—could now manifest the natural world and simultaneously imply through its symbols a mythic world, have resonance beyond the image and perhaps awaken in us fears and caution, leaving us to meditate on our origins and our fate: We have arrived in a landscape peopled with symbols, just a short step from the territory of allegory, to which it is neighbor.

Press a symbol and it will jump over into the larger land of allegory, where the landscape echoes with hints of a story or narrative beyond the actual vista.

Take Lorenzetti’s fresco The Effects of Good Government, a Sienese cityscape of castles and palaces, of the highborn on horses and farmers at their abundant harvest, a portrait of a culture in harmony and order, as there may exist when government is stable and benign. Lorenzetti’s painting is a map of place and its medieval time but also sends out whole essays on the conduct of governance that might lead to such secular Edens.

She read these words and others on the matter in books on her barge on the Seine. As it floated, it seemed like a festooned raft in the dark lake where King Arthur had drawn out his magical sword. She read those words again in a quiet park, where she had set up her easel to paint a monument to the triumph of Spring, Winter represented by leaves fallen in postures of despair on the sculpture’s base.

This was not the kind of art she made or wanted to make, but she had come to a sorry pass in her work, a grand exhaustion of ideas, she who had had them in proliferation, multiplying like toads in spongy ponds. Allegory seemed exhausted, too. A leftover from the time of knights on wounded missions for the Grail, from a time when everything was an allegory: no bread broken without a thought of that last supper at a long table in spring, no rose springing from a garden without a hint of she who had given immaculate birth and was now the Rose of life and the rosette window shedding a tondo of light on the dark cathedral altar. No thought of dying without seeing a diptych of those who had sinned being led to the burning pits of torture and those who were saved sailing aloft to the Empyrean, where God waited in a white light.

Allegory did not bolt into her mind from nowhere. Not like having a coffee in a park and while looking up at the sky thinking, Whatever happened to Allegory? No, she had taken up those books and gave it thought only after seeing a fresco by Puvis de Chavannes in Rouen. Inter Artes et Naturam, it was called, and it portrayed various figures in a park by the sea. Men and  women and youths in contemplation and study, painters and poets and dreamers in a park of arches and young trees and a fragment of an ancient frieze of Pegasus poised to fly. A land of contentment, as in Lorenzetti’s mural, but here the artist muddied the happy scene of the quiet triumph of the arts with some suggestion of sorrow. To the extreme right of the painting and apart from the conclave of artists, a figure of a seated woman, holding an asleep or dead child in her lap. Another woman stands above her. The three forming a triangle of sorrow.

She had seen that painting and had at once dismissed it for its tired sentiment, for its painting of drained figures draped in tissue—as had others of her generation, artists and public alike. But Van Gogh loved it and Gauguin, too, had felt the transcendental shiver it gave. She felt none of that shiver, yet it haunted her, that fresco, and made her think of Poussin’s painting Et in Arcadia Ego and the four figures reading those words inscribed on a monument or tomb in Arcadia, connecting, as she looked out the window of the train from Rouen to Paris, that forlorn human triangle in Puvis’s mural with the idea that even when it is placed in the rearmost wing, Death is at the center of the stage.

Not the sentiment, but the idea that a painting could extend itself in the mind’s time, prolong the duration of art’s event, had captured her. She, whose ideas had felt so spent, even now home again in the brightness of New York spring, with all the trucks and traffic on Canal Street, the energy of gears and motors and the stealthy electronic webs netting the atmosphere beneath her eyes and senses. She did not live in a one-way world or in a world that neatly doubled in on itself. Though her life was simple and had purged itself of the superfluous and sometimes even of the necessary, everything she cared for spun with multiplicity, even the pack of chewing gum on the table near her bed.

Little existed without extension and multiplicity, while much of her art, her painting, had held to the idea of art’s autonomy—to refer to nothing, to speak with the voice of no discernible person or time or place. (Though she also knew that even in their concealment, all art spoke for those things.)

Not the sentiment of the moralizing of allegory, but its power to sustain time, if not through idea, then through reflection. Something was itself and was something else in addition to it. That became clear to her when she saw in her mirror half her face and hair burnished gold in the morning light, the other half dark in the obscuring shadow caught by the birdcage in her studio window. She considered herself in the old antimonies of light and dark, just human inventions and conventions, and found complexity wanting in the simple dualism. She was neither light nor dark, nor was the world nor its creations. But, of course, art did not propose such dichotomies, only she did.

“Light and dark with Death waiting in center stage, as well as all the thoughts, including the arguments and ironies against such ideas, are taken up in allegory’s silent voice,” she heard herself say above the hundred clocks twisting time on their shelves in her studio.

How strange that something so seemingly spent could still be alive—as it was in her, living if only in her thoughts—while buried away for so long in the cellars of tropes and in the dungeons of museums of times dead, of art as useless as armor and pikes. She had left them in a sack, those books and their illustrations, for someone to find on an odd day. But she was haunted by them still, even here, in the New World, at the edge of the century.

Suddenly, all the clocks stopped, very dramatically, she thought, and everywhere. The traffic halted, too. She took her paintings from their racks and tossed them out the window, where they hung in space like postcards fixed on glass. In the stillness of the day, a soft puttering sound and coughing of an engine drifted to her window.

An open barge crowded with people standing and milling about was motoring up the East River and making for the ferry landing. She could see them through her binoculars as they alighted, singly and in pairs. Poussin and Puvis de Chavannes led the procession with chain saws and hammers in hand; Thomas Hart Benton followed, a cornstalk in his belt; Gauguin was there, too, holding a steaming tarbrush aloft, and others she could not identify, and a train of young men and women, some with their bikes, all walking and stopping from time to time to examine the building numbers, searching, it seemed, to find her.

“Allegory: A Parable” is excerpted from The Bar at Twilight. Copyright © 2022 by Frederic Tuten. Published by Bellevue Literary Press. Reprinted by permission of the publisher. All rights reserved..

Murder Among Friends by Candace Fleming, Read by Angela Dawe 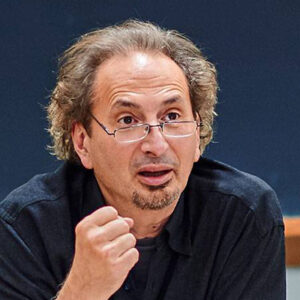 Peter Balakian on How the Transmission of Trauma Across Generations Informs His Poetry On today's episode of The Literary Life, Mitchell Kaplan is joined by Peter Balakian to discuss his latest poetry collection,...
© LitHub
Back to top