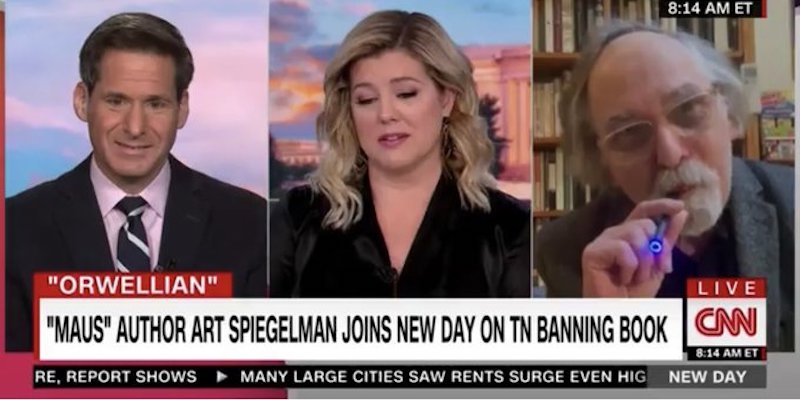 Yesterday, as the “Intellectual Dark Web” continued to hand-wring about the perils of over-wokening, a Tennessee school board voted unanimously to ban Art Spiegelman’s Pulitzer Prize-winning graphic novel about his father’s experience in the Holocaust, ostensibly due to the book’s “rough, objectionable language” and nudity (a small illustration of Spiegelman’s mother, nude in a bathtub having died by suicide).

The only silver lining of this terrifying case of (actual) censorship is that it gave us one of the greatest television interviews of all time, when Spiegelman appeared on CNN to respond to the news, while affably sipping coffee and vaping.

Spiegelman elegantly summed up his reaction, saying, “I’ve moved past total bafflement to trying to be tolerant of people who may possibly not be Nazis? Maybe? Because having read the transcript of the school board meeting, the problem is sort of bigger and stupider than that.”

Ron Gilmer, the segment’s director, said on Twitter of the interview that “In 40 years of Directing TV news I’ve never seen this. He was amazing.”