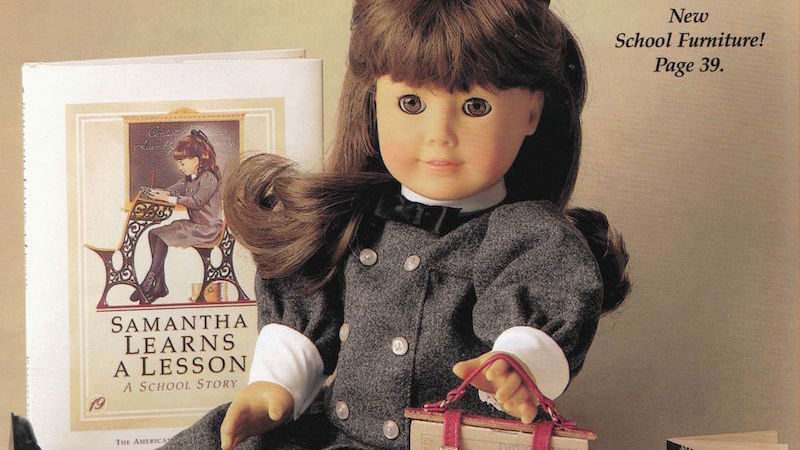 All the history I learned in my youth came from the American Girl doll books.

Most of what I learned in elementary school history classes was the history of the state of Illinois. I grew up in the suburbs of Chicago, and I guess the reasoning behind the curriculum was that it would be more relatable for us? In any case, if you need to know what Casimir Pulaski did, or the names of all the Great Lakes (H.O.M.E.S., baby!), my early education thoroughly prepared me to help you out.

In every other case, though, my early knowledge of history was formed by the American Girl doll books. For those unfamiliar with the American Girl doll phenomenon, it began with a line of three historical dolls—Victorian-times Samantha, pioneer Kirsten, and WWII-era Molly (more were later introduced, including colonial Felicity, and Addy, who escaped from slavery with her mother)—for whom one could purchase a whole host of outfits and accessories. They were expensive and beautiful, and, in my experience as a girl-child of the 90s suburbs, much-coveted by girl-children of the 90s suburbs.

I have no recollection of the books’ literary merits, but I still remember that Kirsten, whose family immigrated to Minnesota from Sweden, lost her best friend to cholera, had to ride out a snowstorm in a cave with the frozen body of a fur-trapper, and then saw her family’s house burned down by the baby raccoon she rescued (Changes for Kirsten, indeed!).

Samantha’s life was more of a petit four walk (she served petit fours at her birthday tea party, naturally), but I learned about child labor from her friend Nellie, a nine-year-old who worked as a maid in the house next door, as well as in a factory.

Every book also included a section called “A Peek Into the Past,” an epilogue-cum-newsreel that gave further historical context for the stories. Were those sections factually accurate? Who knows! But Addy’s story had an advisory board including the founding Director of the Smithsonian’s National Museum of African American History and Culture and several historians and scholars of slavery, which I can almost guarantee is more than some of my elementary school history textbooks could boast.

I loved these books so much that I read even the ones that didn’t correspond to my dolls (though perhaps with a slightly less fierce loyalty), and though I was past prime demographic age when the Pleasant Company shifted their focus to contemporary “Just Like You” dolls, I felt genuinely sad for all the kids who wouldn’t get to learn about wartime rationing from Molly, or the legitimate concerns of the Loyalists during the American Revolution from Felicity’s grandfather.

There was something special about learning history this way—from the perspective of these girls. Even the bizarrely consumerist aspect of learning it from books created for overpriced dolls feels strangely subversive to me, now. Like, you just wanted me to buy more accessories, but joke’s on you because I’m learning!

That’s the thing about capitalism: it’s mostly terrible, but sometimes it teaches you the dangers of bringing raccoons into close proximity with oil lamps.