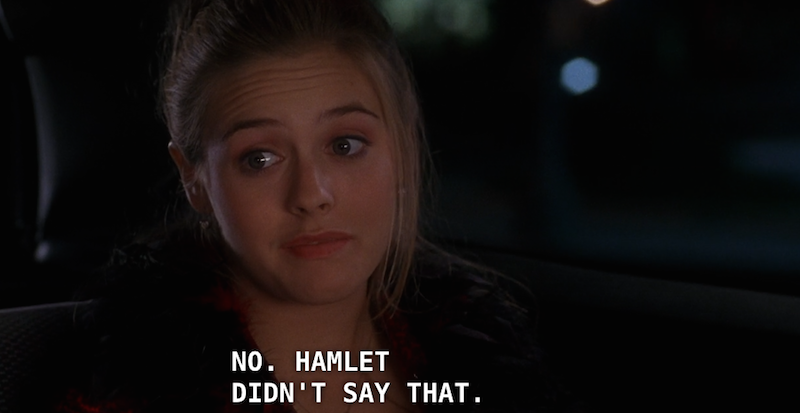 All the books mentioned in Clueless.

Clueless, one of the best literary adaptations of the 90s, has just turned twenty-five. And would Lit Hub miss out on a chance to celebrate it?

Because of the pandemic, we can’t celebrate by making a cameo at the Val party or skipping 7th and 8th to go to the mall, have a caloriefest, and catch the new Christian Slater. We can’t even really go rollin’ with our homies.

But we can emphasize one of the many ways Clueless is brilliant: its use of books. It’s kind of the opposite of a “Monet” (“From far away, it’s OK, but up close, it’s a big ol’ mess.”). Clueless is so good on the details.

Clueless is, of course, an adaptation of Jane Austen’s Emma, and much like in Austen’s work, when characters read in Clueless, it often signals the “poor reading” that is happening in the actual plot—missing cues, judging people incorrectly, and being, well, totally clueless. And the books people choose to read, and not read, provide massive insights into how they work.

Here are the books that all the characters are reading (characters also read legal depositions (Cher’s dad) and textbooks (Miss Geist), but I’m not counting those here):

Covert Bailey, Fit or Fat, and John Gray, Men are from Mars, Women are from Venus

In her plans to help educate Tai, Cher says they shall read one non-school book per week. They select books that maybe aren’t usual candidates for “reading for fun,” since each one plays into their unproductive insecurities: Tai’s about boys, and Cher’s about weight. 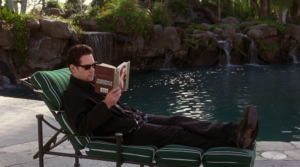 Josh is reading this by the pool, clad in black and with heavy shades, which leads us to think he’s a pretentious pseudo-intellectual. But there’s more to Josh than meets the eye, and he’s revealed to be very sincere. His crush on Cher grows when he sees her discover her love of helping people, and he’s quick to defend her when a pompous lawyer insults her. Not bad for a slug who hangs around the house all the time. 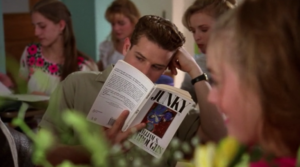 Christian Stovitz is sitting behind Cher reading Burroughs and Cher does not realize what his deal is. That’s all there is to say. 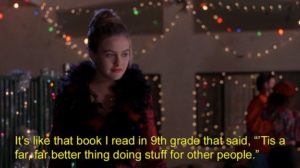 This one we don’t see anyone reading, but Cher remembers having read it in ninth grade, the year before. And yeah, she remembers the line totally incorrectly (it’s the last line in the novel, the would-be final words of Sydney Carton that he doesn’t get to say). This cute misquoting shows how Cher’s attempts to help Tai (attempts which are misguided and kind of oblivious) and her corresponding belief that she is on top of everything, are ultimately out of joint with reality.

This one’s fun because Hamlet is actually not being read (or not being read well) by the person who claims to have read it, Josh’s pretentious college girlfriend Heather. “It’s like Hamlet says, ‘to thine own self be true,'” she pontificates in the car, leading Cher to butt in and gently correct her. “I think I remember Hamlet accurately,” says Heather. “Well, I remember Mel Gibson accurately,” Cher says, “and he didn’t say that. That Polonius guy did.” Heather shuts up, with Cher having proven ONCE AND FOR ALL that just because you’re not gratuitously name-dropping highbrow texts, it doesn’t mean you’re not smart (and often, if you are name-dropping highbrow texts, you’re trying to cover up that you don’t know what you’re talking about). And since Clueless is a movie that is packed with other cultural touchstones, not just books (TV shows like Beavis and Butthead and Ren and Stimpy, for example, and movies like Spartacus), this moment suggests that books aren’t the only texts that have literary or analytical merit.

And also, this scene kind of stresses that film adaptations specifically add to the legacy of their original texts, usually offering valuable insights and interpretations into their sources. Pretty groovy, huh?