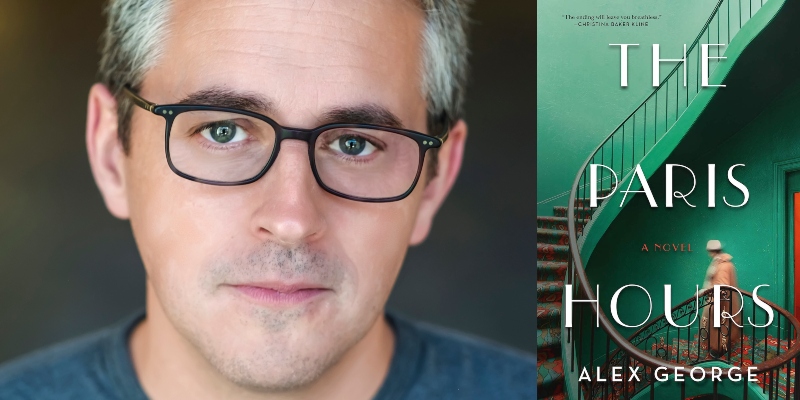 Novelist, Skylark Bookshop owner, and Unbound Book Festival organizer Alex George joins co-hosts V.V. Ganeshananthan and Whitney Terrell live from the festival in Columbia, Missouri, to discuss what’s harder: writing a novel or running a book fest—or doing both and continuing his (other) day job as an attorney. It turns out that doing all of the above is difficult, but so rewarding that George wouldn’t have it any other way. George also reads from his 2020 novel The Paris Hours, an Indie Next Book of the Month selection and Amazon Best Book of the Month, and discusses the merits of living in Columbia’s literary community. Finally, he takes questions from the live audience at Unbound.

V. V. Ganeshananthan: I couldn’t help but think about the different ways that the plot of The Paris Hours moved and jumped in time and the different things that characters shared with each other at certain points.

Alex George: I guess I should give just a little bit of background. So the book takes place over the course of one day, and these four characters are presented in rotating chapters. So right there, I caused myself about 17 different headaches just by giving myself this quite ridiculous structure to have to sort of fit everything into.

Whitney Terrell: But a constraint can sometimes help, you know. That’s what poets do, create constraints for themselves. So you created that constraint from the beginning?

AG: From the very beginning. And people would say, why did you decide to do that? And that’s the question I cannot answer, because I have no clue why I thought that was a good idea. I mean, there are some other books that take place over the course of one day. Some of which are much bigger than my book. But you know, that wasn’t why. I wasn’t doing it in homage to Joyce or anything, but I just thought, Oh, that’ll be interesting. But it was a technically complicated thing to do. And what I ended up doing was to write—and the chapters are also quite short…

So I’d write five or six chapters in a row from one person’s point of view, and then five or six from another, and then I literally shuffled them together. Because in addition to having this rotation, the day had to move forward chronologically, without there being a glitch in the space-time continuum, and suddenly you go back two hours. And there was an awful lot of metaphorical, and occasionally literal, banging of my head against my desk to try and make it work. And, you know, there was a degree of shoehorning involved. But as you said, I mean, sometimes those limitations, you know, you have to get creative when you do something like that.

WT: Donald Barthelme said that part of doing fiction is deciding what doors you’re going to close. You have to have those constraints or you don’t really have invention. I think it forces you toward invention.

AG: Yeah, that’s right. And I mean, I don’t do it anymore, but I used to teach a class with my wife actually called Chapter One in the Honors College at [the University of Missouri]. And it was such a fun class. It was a 15-week course. We spent 10 weeks reading first chapters of novels that we really liked and looking at what people did. And then the last five weeks, we would workshop the students’ chapters. My wife is this brilliant academic who’s just way smarter than I am, and I was in there for the creative writing stuff.

And I was talking about—this is really the point that you were making, Whitney—about, if you have a man walking up a hill, there are an infinite number of decisions that you need to make when you’re telling the reader that. Do you talk about the weather? Was there a bench? Maybe there was an inscription on the bench? What’s he thinking about? Is he chewing gum? Or maybe he just ate a banana. And what does he see in the back there? All of these questions and you have to spend a lot of time slamming those doors shut and working out which doors you’re gonna leave open and what’s important, and that … I mean, talk about plot and revision… I mean, I cut out so much stuff from my books. I’ll write something, leave it for as long as I possibly can, and then go back to it. And two-thirds of it is completely irrelevant. And so I just expunge as much as I can.

VVG: Do you have a secret cabinet of B-sides?

AG: Well, I have enormous, very large files on my computer, because I never delete anything in the idea that… I mean, it’s clearly nonsense… but something that I’ve deleted might one day be worth, I might…

VVG: You could do an anthology. We all have them, right?

VVG: So I’m curious about when you’re rearranging all this stuff and you’re banging your head against your desk, is this like an after hours, at Skylark [Bookshop], on the floor, you print out the whole book and you’re moving it around, or are you a Post-It guy? Are you a flowchart guy? How do you reorder?

AG: I’m none of those things. And it probably would have been much easier if I was at least one of those things. I realize that no one… people listening to the podcast can’t see the face I’m making, but you know, I would just think really, really hard, just trying to work out where things needed to go. I had these little chapters, so it was easy to move them around. So there was a sort of modular element to it. But the problem is that if you move one, then all of the dominoes fall apart. And then you have to rebuild it all again from scratch, which wasn’t great. And there probably was a smarter way of doing it.

But no, I mean, I see people, like a lot of writers, people seem to do this less now, it used to drive me crazy, I’m sure you too, they would Tweet or something about, “Well, I wrote 3000 words today,” and I was like, thank you so much for sharing that. But what people do do is, they post pictures of their walls with multicolored Post-It notes on them. And it just makes me feel so dumb. I’ve never done it. I’m such a non-visual person; it’s all words. And so even having it color-coded, well, it’s no use to me at all.

VVG: But Alex, that’s amazing. Because, I mean, when he says a lot of short chapters [addressing audience], there’s like 40. Yeah, so you just kept them in your head?

VVG: I’m floored. That’s amazing. I would love to have the ability to hold the entire structure of a novel that I was working on in my head. I don’t know that I’m a Post-It person, but…

WS: But I think that’s where the unconscious comes in. I mean, you do have it in your head. But I don’t think your conscious mind can process all of it all the time, right. But if you get breaks, if you’re only writing for two hours at five in the morning, you’ve got—all day your unconscious mind has time to process and think about what you’ve done and how it affects those other pages. And then in the morning, you can see better, or at least that’s how it works for me.

AG: Yeah. And what works really well for me is if, and this doesn’t always work for various reasons, but if I can get into the shower at seven o’clock, immediately after I finish writing, there’s something about showers, that just… and very often what I’ve done that morning, will realign itself a little bit and make a little bit more sense, which often involves therefore, my getting out of the shower quite quickly, possibly too quickly, and writing down like… It’s funny how things crystallize after the event. And there’s maybe something to do with running water. 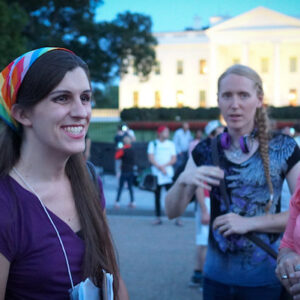