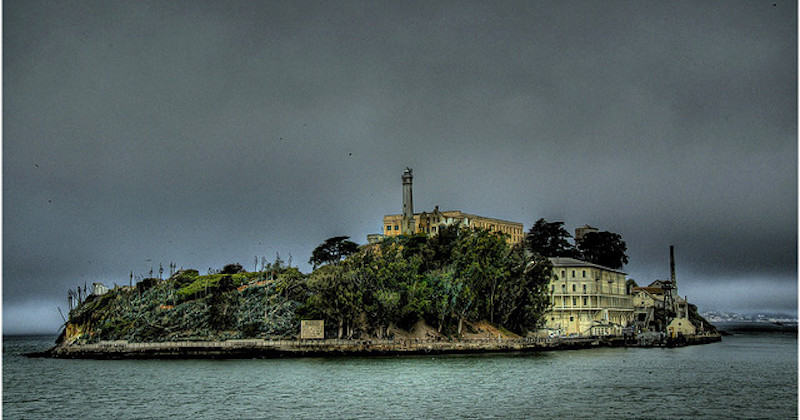 ‘Alcatraz’
A Story by Leanne Shapton

From Her Collection Guestbook

She looked me in the eye and said, “This is a true story.” We were at a dinner party, a casual one in someone’s enormous, expensively fitted kitchen. She had come alone, was recently divorced. I’d met her before, but we’d never really spoken or found common ground. I’d always thought she was chilly. When we were sat next to each other at dinner and got to talking about books and people we both knew, I realized her shyness was the blurry, foggy kind—reserved, but not cold.

She told me she had been visiting San Francisco with her boyfriend, who would become her husband, and then her ex-husband. His name was Troy. It was early days. Troy was there for work, and they stayed in a suite on the 40th floor of the Four Seasons. She sipped her wine and said she had not been used to hotels that nice. The square footage. The sitting room. The enormous white towels. They’d had a driver. She’d been to San Francisco before, when she was ten, during a stopover on a family trip to the Philippines. They’d stayed with her mother’s Filipino cousins in a small house, and she’d slept in a bottom bunk with her brother. She told me she’d drunk a whole can of Coca-Cola for the first time in her life that night, and she laughed.

The day after they arrived, Troy had meetings, so, she said, she decided to visit Alcatraz. She laughed again and said that as a teenager, she’d worn a pink-and-white sweatshirt that had been sent to her by those same Filipino relatives. She described the puffy white stencil-style letters that read Alcatraz Swim Team above a flocked blob of the famous island.

We were offered coffee at this point, and some of the guests had moved to the living room, but we stayed in the kitchen and poured ourselves more wine. She boarded the ferry and took the 30-minute guided tour with a handful of other visitors, listening closely as the guide explained the routine of
an Alcatraz inmate, its history as a military prison that held Confederate sympathizers during the Civil War, the designation of bunks, the block called “Park Ave” where the prisoners, on certain nights like New Year’s Eve, could hear the sounds of the city across the bay and were served spaghetti and better-than-usual food in the mess hall. The guide boasted that “the crème de la crème of criminal minds came to Alcatraz.”

She whispered to him that someone was in the room. He turned on the bedside lamp. The chair was empty.

When the tour was over, the guide invited the visitors to wander the site for as long as they wished. She returned to what had been the library. She described the room as fenced-in, large, and bare, with peach-painted walls, empty wooden bookshelves, and tall barred windows. She stayed in that room a long time and thought of the prisoners reading books. She remembered the safety and escape she felt as a child, in libraries. She retraced the tour backward, pausing to take pictures of the cells where two prisoners had successfully escaped by leaving dummies in their bunks. She stayed for hours, watching as a new tour was led through, looking at the glossy green-and cream-painted walls, the bars, and the corridors. Finally she left, late afternoon. They had reservations for dinner in Berkeley that night, and she said that as the car had crossed the bridge she’d looked at the dark rock of Alcatraz in the middle of the water, and violent thoughts, bloody, ferocious thoughts, had filled her mind. She shook her head.

That night she woke, unable to move. The space in the bed beside her was empty, and there was a man sitting in an armchair in the corner of the room. Both of his hands were placed along the rests, and his legs were stretched out on the ottoman. He was still. She tried to call out for Troy and to move her fingers, but she was frozen and unable to speak. She remained in that state for a few minutes, and then she was finally able to make a small noise and push her arm an inch across the sheet. She sat up. The toilet flushed, and Troy returned from the bathroom. She whispered to him that someone was in the room. He turned on the bedside lamp. The chair was empty. He looked around the room and went into the sitting area. Nobody was there.

The next day she and Troy visited the San Francisco Zoo. She said that she wore a skirt and, in the car, put a hand up her skirt and scratched herself hard. She described walking around the zoo as agony. She had wanted to touch herself in the aquarium, looking out over the manatee swimming slowly in its round pool, at the pacing lions, at the gorillas. Out by the llamas she straddled a children’s ride, a toy duck, and moved atop it for some relief. Back in the car she reached up her skirt again and told Troy she needed to go to a drugstore. They flew home that afternoon.

For the next week, back at her apartment in New York, she was distracted every few days by the sensation of a cat brushing past her legs. She did not own a cat, but she would turn and look down at her feet. There’d be nothing there, and she’d go back to whatever she was doing. The feeling of a gentle brush against her legs persisted for another week, then another, always with the same, invisible result. She began to wonder about it and told Troy over dinner one night. He asked her if she felt anything when it happened.

She told him, “Sadness.” The word had only then occurred to her, but it was true. Troy asked when it had started. She told him it had started in San Francisco after visiting Alcatraz. Then he told her that he thought something had attached itself to her at Alcatraz. He told her that when he first visited the prison he’d become obsessed with the story of Robert Stroud, the “Birdman of Alcatraz.” When he got home he walked into his apartment to find that a bird had flown in while he was away and had shat all over his furniture.

The next morning, as she was pouring milk into a bowl of granola, the cat-brushing-past feeling happened again. Troy told an acupuncturist friend about what was happening. After thinking hard on the details, the acupuncturist told her that the spirit of a prisoner had attached itself to her at Alcatraz, that it sought the sympathy she felt for the men who had been there, sympathy they’d desperately sought. The acupuncturist suggested that she take off all her clothes, have Troy burn sage in circles all around her, open the windows in the apartment, firmly ask the spirit to go, and then leave the windows open for the rest of the night. 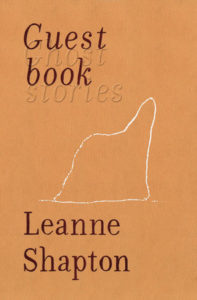 From Guestbook: Ghost Stories. Used with permission of Riverhead. Copyright © 2019 by Leanne Shapton.

Leanne Shapton is an artist; author of several books, including Swimming Studies (winner of the 2012 National Book Critics Circle Award for Autobiography) and Important Artifacts and Personal Property from the Collection of Lenore Doolan and Harold Morris; and a coauthor of The New York Times bestselling Women in Clothes. She is also the cofounder of J&L Books, a nonprofit publisher of art and photography books. She lives in New York City.
Share:

A Wonderful Stroke of Luck 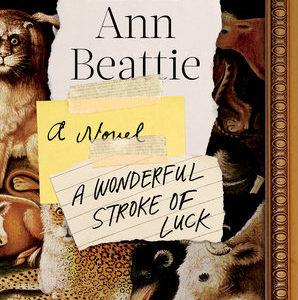 A Wonderful Stroke of Luck "Ladies and gentlemen, today Dr. Ha, though called upon, was unable to speak, so The Powers That Be have decreed that in the absence...
© LitHub
Back to top
Loading Comments...