The Painter Was Haunted By More Than a Few Spirits

When we speak of the poetry or painting of place, we generally refer to words and images that celebrate or else investigate some fixed location. And yet, given that all creative works have arisen from whatever influences surrounded their geographic point of composition, surely all art could be said to be the art of place, something that could only have emerged from that specific spot at that specific time?

A city, a field, a house, a street: all of these have their own aura, their own atmosphere, a lyric condensation born of memory and history, of people and events, and to suggest such is not controversial. Might it be, however, that some places have not only an embedded past, but an embedded future also? Could some works of art be already contained within their site of origin, immanent and waiting for discovery, for realization?

Writer and First World War fatality William Hope Hodgson modeled his 1908 apocalyptic fantasy, The House on the Borderland, upon a chasm-straddling clifftop edifice that he’d seen as a child on the west coast

of Ireland, forcefully imagining its occupant as a recluse haunted by supernatural or psychological intrusions from below.

Some decades later Iris Murdoch visited the same spot, unaware of Hodgson’s novel, and unwittingly reprised the same plot-elements in her subsequent book, The Unicorn. The implication, then, is of landscape as author and, conceivably, a poetry of place dictated by the place itself. 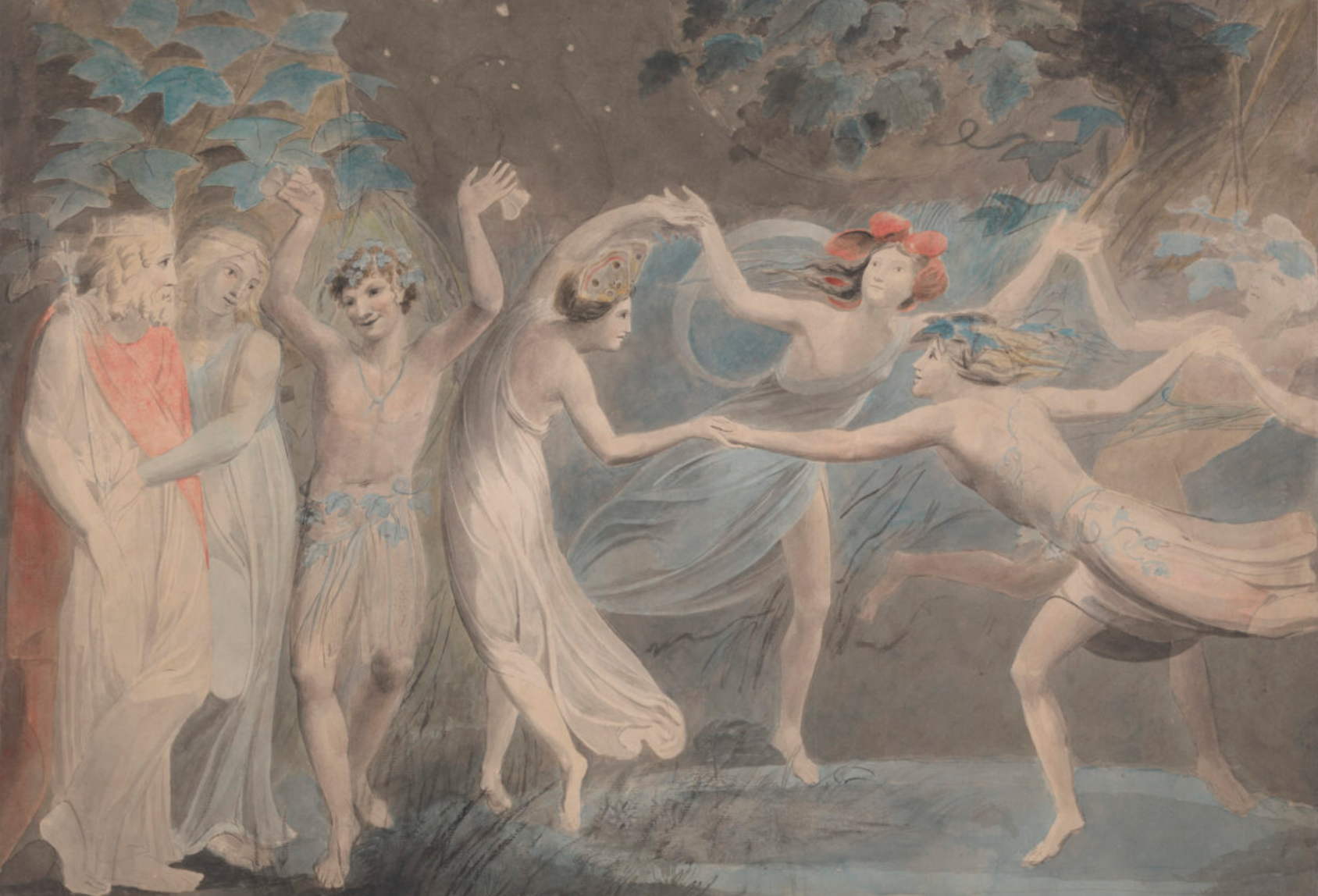 If we therefore imagine the material world about us having a concealed component of the fictional and the fantastic, visions buried in its stones and mortar waiting for their revelation, then we may suppose that 18th-century Lambeth was a teeming hub of such imaginal biodiversity. Bedlam alone, producing the excruciating faerie wonderland of Richard Dadd and Louis Wain’s hallucinatory felines, could account for this ethereal population-boom, but then nearby was the Hercules Buildings residence of William Blake, which can have only added to the sublime infestation.

Blake’s house is long gone, with nothing but the herculean mural decorating a replacement flat-block nodding to its memory. Other than some contemporary depictions, all we know about the place is of the incidents that he, his wife and their associates reported as occurring there. There is a drawing of William and Catherine in their bedroom that radiates a scuffed contentment. There are the naturist anecdotes suggesting that the couple had repurposed their back garden as an urban Eden.

But the place that would seem to have harbored the most startling idea-forms is the liminal, transitional space represented by the stairway, hall, and landing. It was here that Blake was introduced to two of his most memorable phantasms—the glowering Ancient of Days, and the macabre Ghost of a Flea.

The last of these, painted 25 years after the former, was the first to be encountered. Blake and Catherine moved into 13, Hercules Buildings in 1790, and according to Blake’s biographer Alexander Gilchrist, it was that same year during which Blake described his only sighting of what he believed to be a ghost. Speckled and scaly, the appalling apparition had rushed down the stairs at the poet and illustrator, driving him out into his Edenic garden, more afraid than he had ever been before; would ever be again.

Then, what must presumably have been only a short while after, Blake was witness to a second visitation, of a very different nature and yet once more manifested near the stair-head, hovering above the landing. 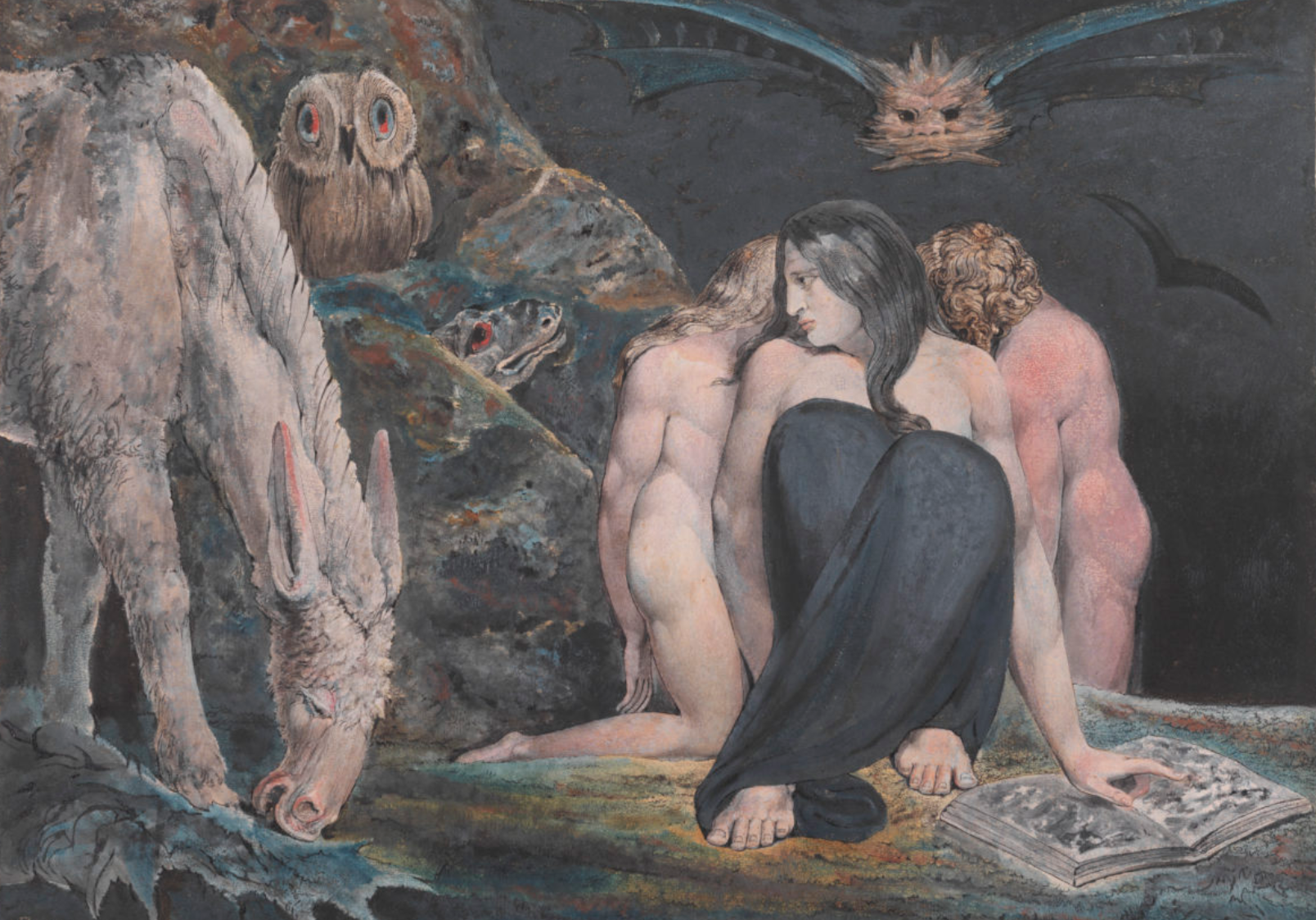 This forbidding figure, Blake’s Ancient of Days, was worked immediately into the South London hierophant’s evolving personal mythology, and would become the frontispiece portrayal of Blake’s demiurge, Urizen, for his 1794 publication Europe a Prophecy. This stern primordial entity, perhaps Freemasonry’s then-recent conception of a “Great Architect,” makes his exact and calculated judgement from a throne amidst the clouds, above the mundane darkness of the world. His seat is possibly the sun itself, but is here shown as a concavity; one of Blake’s “chariots of fire”, or else the ostentatious 1960s swivel-chair of a Bond villain, ruthless and hubristic.

The dividers with which this windswept creator makes his moral measurements, along with something of the posture, crouching and absorbed, would recur a year later in Blake’s Newton, where the celebrated scientist and chief designer of the stock market binds all existence in an arc of regimented rationality that Blake described as “Newton’s sleep”.

The father of thermodynamics’ deified and Apollonian appearance is most probably satirical, a marker of vainglorious ambition, and this same authoritarian conceit is evident in Blake’s judgemental Ancient as, like Newton, he divides the cosmos into motion, heat and gravity. This, perhaps born of Blake’s Moravian parentage or the dissenting Christian faiths that he grew up with, seems a Gnostic view of the Almighty as self-glorifying tyrant, manufacturing a penitentiary material universe that it might worship him, an obvious precursor to the artist’s apt and very modern coinage, “Nobodaddy.”

Blake, a friend to William Godwin, was a proto-anarchist. In his reaction to this second hallway visitation we can see him turn his huge, radical eyes upon conventional religion, where he finds that pasture wanting.

Twenty years would pass before the earlier and more aggressive of Blake’s Lambeth spectres would be conjured into visible, malign existence as a fresco, worked in tempera and gold upon a hardwood panel, tiny even in comparison with Blake’s other unusually small compositions. The peculiar circumstances of this late revisiting invite examination: in 1818, by now living with Catherine at their South Molton Street address, Blake had been visited by friend and patron, astrologically-infatuated watercolorist John Varley. 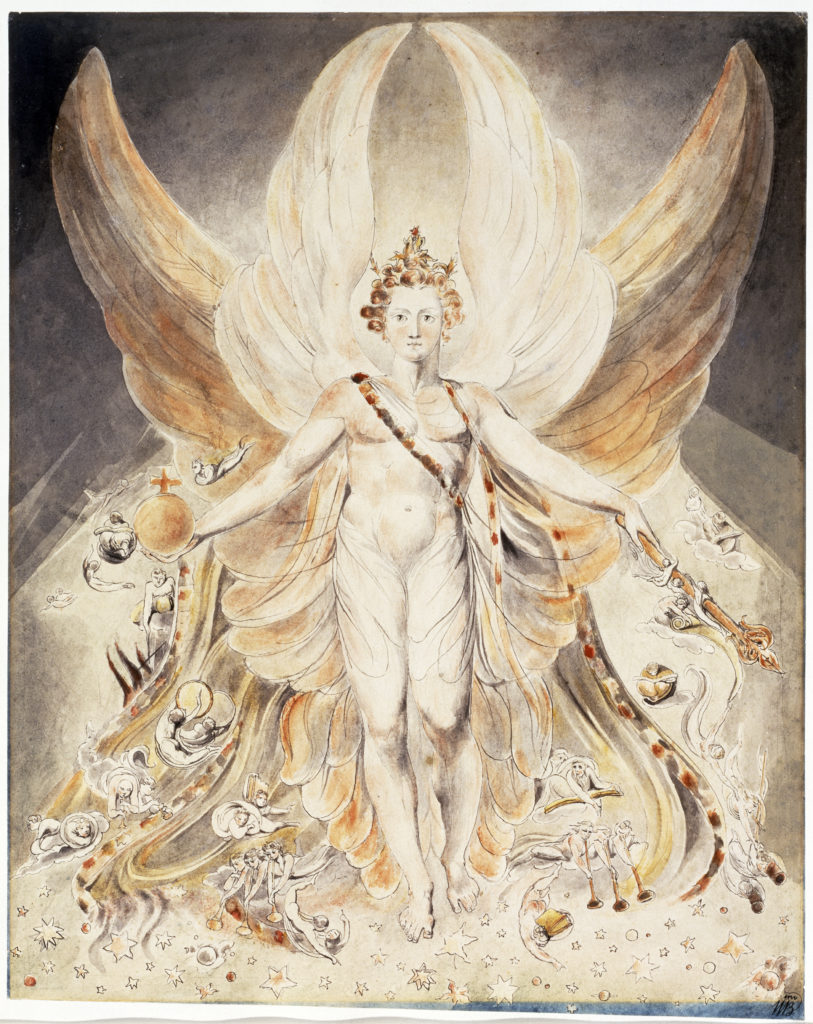 As the conversation turned to Blake’s sole sighting of a ghost, two decades earlier in Lambeth, Varley asked for a description of the phantom and, in what must have been a spine-tingling moment, Blake claimed that he saw the creature there before them as they spoke, asking the younger man to pass him his drawing materials.

There is an eerily persuasive incident halfway through this part séance/part sitting as described by Varley, when Blake paused in his delineation and explained that his uncanny model had just let its mouth fall open, forcing him to work upon a detail of the jaw until his subject had resumed its pose. By the next year, Varley, a frustrated spiritualist who had never seen a spirit, had commissioned Blake to work the sketch into a finished portrait as part of a proposed series titled “Visionary Heads”.

And so, in 1819, Blake’s horrific visitor of 1790 finally stepped out onto a stained and creaking stage, making its debut in the muddy world of matter and sensation.

As imagined by the Lambeth angel-whisperer, the threatening and somehow smug abomination is theatrical in its demeanor, consciously performing for the viewer. Glossed by Blake, the flea is the transposed soul of a murderer trapped in a form which, while both bloodthirsty and powerful, is too small to become a mighty engine of destruction. Thus condemned, it struts its miniature domain and makes a swaggering display of cruelties that it can no longer accomplish. 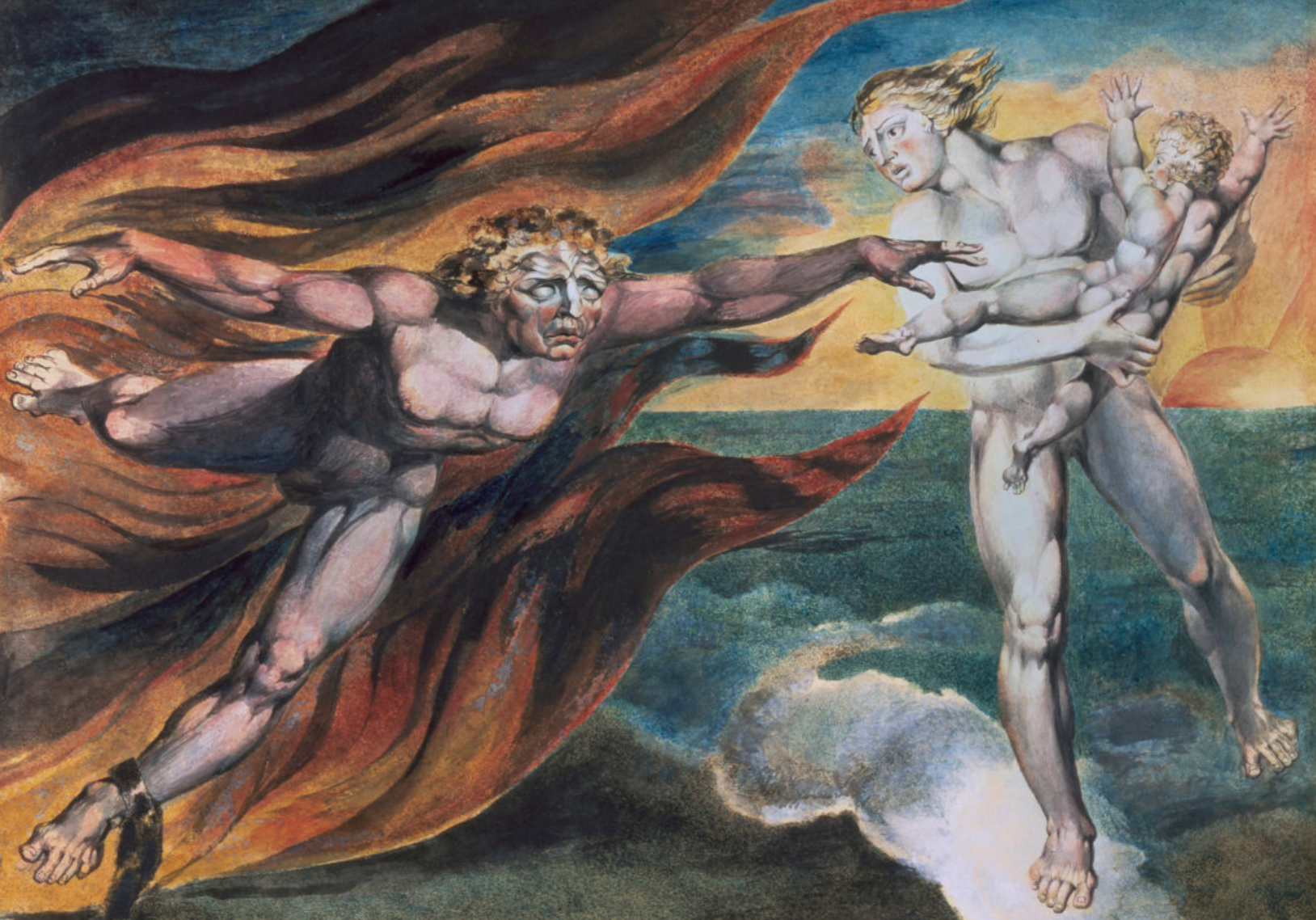 With nothing save an acorn-cap to represent its drinking-bowl of blood, with nothing but a thorn to serve as improvised prison-yard shiv, this former demon is demoted and no longer dangerous. In its fallen state, more mischievous than malefic now, the has-been homicidal maniac is almost poignant.

Framed by threadbare curtains with a plunging star upon its painted backdrop, something in the monster’s owl-like stare and heavy posture led me to recruit it as a premonition of Sir William Withy Gull, the posited Whitechapel killer in From Hell, my work with Eddie Campbell: so compelling is Blake’s transmigrated murderer that it seemed only fitting it should reincarnate Jack the Ripper, London’s most well-known contributor to that profession.

Once again, there is the sense of something that once had its own imagined grandeur, its own self-exonerating black magnificence, reduced now to a sordid tabloid narrative of pointless butchery; a banal flea-bite on the wrist of history. The Gothic nightmare licks its chops and postures on its narrow platform, in a sour astral miasma. Weathered and distressed, the craquelure and mottling only enhance the glimmering murk in which the violent wraith enacts its purgatory, treading the discolored boards, the sky forever falling.

In the hallway of 13, Hercules Buildings, Blake beheld both austere deities and trampled devils. It is to the credit of his generous and blazing soul that Heaven was not spared his fierce, critical gaze, nor Hell his sympathy. 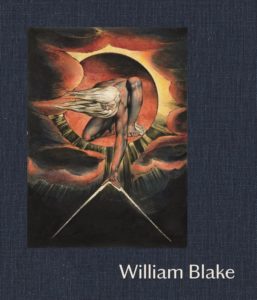 This essay was originally published in Martin Myrone and Amy Concannon’s William Blake, Tate in association with Princeton University Press, 2019, pages 199-202. The book accompanies the exhibition of the same title, on view at the Tate Britain (London) through February 2, 2020.

Alan Moore is perhaps the most acclaimed writer in the graphic story medium, having garnered countless awards for works such as Watchmen, V For Vendetta, Swamp Thing and Miracleman. As one of the medium's most important innovators since the early 1980s, Moore has influenced an entire generation of comics creators, and his work continues to inspire an ever-growing audience.

Speaking the Anthropocene: An Interview with Robert Macfarlane 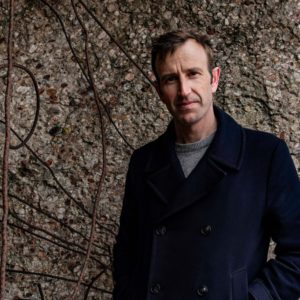 Speaking the Anthropocene: An Interview with Robert Macfarlane Emergence Magazine is a quarterly online publication exploring the threads connecting ecology, culture, and spirituality....
© LitHub
Back to top
Loading Comments...