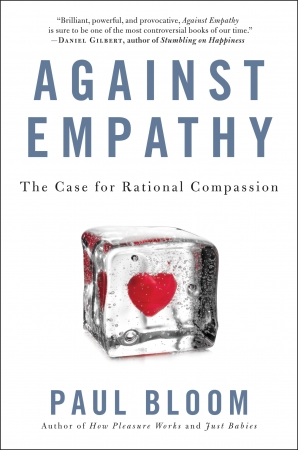 The following is from Paul Bloom’s book, Against Empathy. Bloom is the Brooks and Suzanne Ragen Professor of Psychology at Yale University. He has won numerous awards for his research, writing, and teaching. His previous books include Just Babies and How Pleasure Works, and he has written for Science, Nature, The New York Times, and The New Yorker. He lives in Guilford, Connecticut.

For the last couple of years, when people ask me what I’ve been up to, I say that I’m writing a book. They ask for details and I tell them, “It’s about empathy.” They tend to smile and nod when I say the word, and then I add: “I’m against it.”

This usually gets a laugh. I was surprised at this response at first, but I’ve learned that being against empathy is like being against kittens—a view considered so outlandish that it can’t be serious. It’s certainly a position that’s easy to misunderstand. So I’ll be clear from the start: I am not against morality, compassion, kindness, love, being a good neighbor, being a mensch, and doing the right thing. Actually, I’m writing this book because I’m for all those things. I want to make the world a better place. I’ve just come to believe that relying on empathy is the wrong way to do it.

One reason why being against empathy is so shocking is that people often assume that empathy is an absolute good. You can never be too rich or too thin . . . or too empathic.

Empathy is unusual in this regard. We are more critical when it comes to judging other feelings, emotions, and capacities. We recognize their nuances. Anger can drive a father to beat his infant son to death, but anger at injustice can transform the world. Admiration can be wonderful if directed toward someone who deserves it; less wonderful if one is admiring, say, a serial killer. I am a fan of deliberative reasoning and will push for its importance throughout the book, but I’ll admit that it too can steer us wrong. Robert Jay Lifton, in The Nazi Doctors, talks about the struggles of those who performed experiments on prisoners in concentration camps. He describes these doctors as smart people who used their intelligence to talk themselves into doing terrible things. They would have been better off listening to their hearts.

For just about any human capacity, you can assess the pros and cons. So let’s give empathy the same scrutiny.

To do so, we have to be clear what we mean by empathy. There are many definitions thought up by psychologists and philosophers: One book on the topic lists nine different meanings of the word. One team of researchers notes that empathy is used for everything “from yawning contagion in dogs, to distress signaling in chickens, to patient-centered attitudes in human medicine.” Another team notes that “there are probably nearly as many definitions of empathy as people working on this topic.” But the differences are often subtle, and the sense of empathy that I’ll be talking about throughout this book is the most typical one. Empathy is the act of coming to experience the world as you think someone else does.

Empathy in this sense was explored in detail by the philosophers of the Scottish Enlightenment, though they called it “sympathy.” As Adam Smith put it, we have the capacity to think about another person and “place ourselves in his situation . . . and become in some measure the same person with him, and thence form some idea of his sensations, and even feel something which, though weaker in degree, is not altogether unlike them.”

That is how I’m thinking about empathy. But there is a related sense that has to do with the capacity to appreciate what’s going on in the minds of other people without any contagion of feeling. If your suffering makes me suffer, if I feel what you feel, that’s empathy in the sense that I’m interested in here. But if I understand that you are in pain without feeling it myself, this is what psychologists describe as social cognition, social intelligence, mind reading, theory of mind, or mentalizing. It’s also sometimes described as a form of empathy—“cognitive empathy” as opposed to “emotional empathy,” which is most of my focus.

Later in this chapter, I’ll talk about cognitive empathy, rather critically, but right now we should just keep in mind that these two sorts of empathy are distinct—they emerge from different brain processes, they influence us in different ways, and you can have a lot of one and a little of the other.

Empathy—in the Adam Smith sense, the “emotional empathy” sense—can occur automatically, even involuntarily. Smith describes how “persons of delicate fibres” who notice a beggar’s sores and ulcers “are apt to feel an itching or uneasy sensation in the correspondent part of their own bodies.” John Updike writes, “My grandmother would have choking fits at the kitchen table, and my own throat would feel narrow in sympathy.” When Nicholas Epley goes to his children’s soccer games, he has to leave the row in front of him clear for “empathy kicks.” And it takes someone sturdier than me to watch someone bash himself on the thumb with a hammer without flinching.

But empathy is more than a reflex. It can be nurtured, stanched, developed, and extended through the imagination. It can be focused and directed by acts of will. In a speech before he became president, Barack Obama described how empathy can be a choice. He stressed how important it is “to see the world through the eyes of those who are different from us—the child who’s hungry, the steelworker who’s been laid off, the family who lost the entire life they built together when the storm came to town. When you think like this—when you choose to broaden your ambit of concern and empathize with the plight of others, whether they are close friends or distant strangers—it becomes harder not to act, harder not to help.”

I like this quote because it provides a nice illustration of how empathy can be a force for good. Empathy makes us care more about other people, more likely to try to improve their lives.

From AGAINST EMPATHY.  Used with permission of Ecco. Copyright © 2016 by Paul Bloom.

Poetry As Prophecy: A Conversation with the Astro Poets 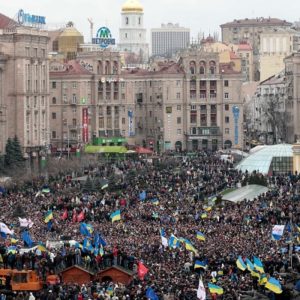 Where is the Power in Mass Protest? Three years ago, on November 21, a small group of students gathered in central Kiev to protest Ukrainian president Viktor...
© LitHub
Back to top