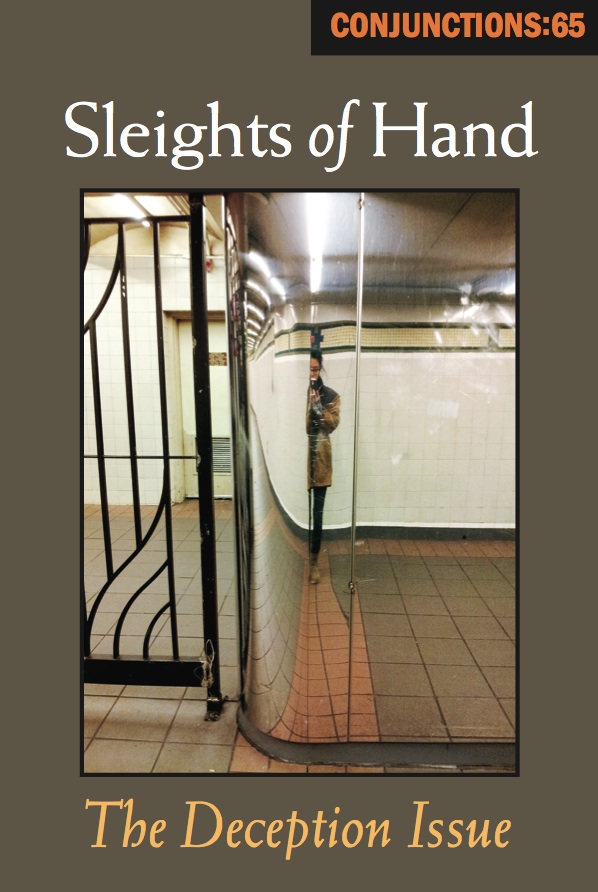 The following is Laura van den Berg's story from the newest issue of Conjunctions. van den Berg was raised in Florida. Her collection of stories include What the World Will Look Like When All the Water Leaves Us and The Isle of Youth. Her debut novel, Find Me was published this year.

Genevieve moved back into the house on a Monday. The place needed a good clean, she had decided, so she found a cleaning service called Aftermath in the phone book. They told her it would take three days to clean the house and that she could not be present.

“Should we be aware of any biohazards?” the receptionist asked. “Biohazards?” She was standing in her kitchen, talking on the landline. She imagined she was one of the last remaining people in America with a landline.

“Blood, fecal matter, teargas,” the receptionist said. “Oh,” Genevieve said. “No. Nothing like that.”

She checked into a motel called the Sagebrush. In bed, she listened to the rattle of the ice machine. She watched workout infomercials with the volume on mute. On her last night, a man pounded on her door and shouted, VERONICA! but left before she could call the front desk to complain. In the morning, she found a toupee lying in the hallway like a dead animal.

At first, her house looked the same, the counters and floors a little brighter from the cleaning, except the attic ceiling was open on the second floor. The steps had been unfolded, an invitation to climb. The attic had always been there, of course, though the real estate agent neglected to mention it when she showed the house. Genevieve noticed it on her first night—the rectangular door in the ceiling, the dangling string—and knew immediately that she would never go up there. Attics were home to hideous family secrets and ill-tempered ghosts and rat kings. Everyone knew that terrible things happened in attics. She had lived in the house for nearly a year and stayed true to her word.

Aftermath must have cleaned the attic and forgot to close it, Genevieve thought. That was the explanation that made the most sense. She folded up the stairs and tried to close the attic, but it wouldn’t budge. She bent down and grabbed the edges of the door and pulled. She wedged herself underneath the door, gritted her teeth, and pushed. Soon she was short of breath and her hands were burning. The door was stuck. Something was wrong with the hinges. She looked into the dark mouth of the attic and felt a gust of air, like something was breathing on her.

That night, Genevieve slept downstairs, on the couch, away from the attic.

The phone woke her. It was the middle of the day. She stumbled into the kitchen in her pajamas and striped socks, wondering how long she would have slept if the phone hadn’t rung. It was her neigh- bor, calling to see about the house.

“I saw the cleaners go in. There were six of them, in gas masks and gloves and plastic overalls. A frightful sight, we all agreed.”

“We” meant the neighbor and her two blind tabby cats, Dr. No and Mr. Goldfinger. This neighbor once told Genevieve that she only adopted blind cats because she hated the idea of animals watching her in the night.

“Well, I suppose one thing is different,” Genevieve said. “The attic ceiling is open. It won’t close.”

“You just need to put a little muscle into it.”

“I tried.” The kitchen counter held the bright orb of her face. Those cleaners had done a truly remarkable job.

“Your sister,” the neighbor began, but Genevieve hung up before she could say anything more.

That night, in the bathroom, she pried the floral shower curtain off its rings. She found a hammer and a small box of nails and a step- ladder. She stood on the stepladder and nailed the shower curtain over the opening. She drove the nails in fast and clean. When she was finished, the stairs poked out like a crocodile’s jaw, but at least the attic entrance was covered. Genevieve slept in her own bed and in the middle of the night, she found herself swimming back to the time her sister dressed as a heart surgeon for Halloween. She wore a surgical mask and the green rubber gloves their mother put on to wash dishes.

In the morning, she found a puddle of flowers on the hallway floor. The little dark nails were missing from the ceiling and they were not lost in the folds of the shower curtain or anywhere else in the house, so far as she could see. She stood against the wall and chewed her nails. It was only after she tasted blood on her thumb that she realized she was chewing past the quick.

She called Aftermath and told them what was going on.

“One of your people opened the attic ceiling,” she said. “I need for you to make this right.” She wondered if they would ask about her sister, who had recently gone missing. The last time she was seen in the house, what she was doing.

“Impossible,” the receptionist said. “It wasn’t us. We never clean attics.”

“You clean biohazards!” She was getting all twisted up in the cord. She could hire contractors to cement the attic shut. She could check back into the motel. She could move.

Later she wrote a long letter of complaint, addressed to the CEO of Aftermath, and put it in the mail.

The truth was she couldn’t remember the last time she saw her sister. At the start of winter, her sister had come to stay with her. Genevieve had not seen or talked to her sister in months. One day she just showed up. This was a small house, without a guest room, so they shared a bed, like they did when they were children and scared of thunderstorms. They watched Late-Night TV and ate chocolate pudding. Her sister petted Genevieve’s hair and called her “Genie.” Sometimes her sister got sad. Sometimes Genevieve would hear her crying in the shower. This wasn’t such a surprise, though: Her sister had always been sad.

“What have you been doing all these months?” Genevieve would try asking her.

“Oh, you know,” her sister would say.

They had known each other for their whole lives and that was the best answer she could get. Oh, you know.

I don’t know anything, Genevieve longed to say, but she worried she would only make her sister more sad.

None of these times was the last time.

The contractor came to give an estimate. He wore a white con- struction helmet and carried a clipboard and when he saw the open attic ceiling, he shook his head and said, “I’m sorry, ma’am, but there’s not a thing we can do about that.”

“Can you at least try closing it?” Genevieve sighed. “The hinges are stuck, but maybe if a man tried.”

He held his clipboard tight against his chest. He eyed the attic ceiling, like it might be aware that it was being discussed. “It’s not a question of strength.”

“Don’t ever call me again,” the contractor said.

She listened to the clomp of his boots as he left the house. She unfolded the stairs and sat on one of the lower rungs. If the attic was going to be such a menace, it could at least give her a place to sit down.

Genevieve wasn’t sure how long she had been sitting there before she remembered the sound of her sister’s footsteps coming up the stairs, her face appearing in the hallway, her pale cheeks puffed from crying.

“No one says you have to leave.” Genevieve remembered listing the ways she could help her sister be less sad. Pancakes with whipped cream, walks in the woods, buddy-cop comedies, daffodils, long drives that ended in ice cream. It would have helped if her sister had been willing to leave the house.

Her sister had walked right past her, coming to rest underneath the attic ceiling. She looked very tired, like she hadn’t gotten a good night’s sleep in weeks, which Genevieve knew was impossible, since they had been sleeping in the same bed, their tongues sweet with chocolate. She stared up at the attic ceiling like it was expecting her. She touched the string.

“Don’t go up there.” Genevieve’s breath had turned quick. Her heart felt like a ringing bell. “There’s absolutely nothing up there.”

Something was about to happen. But what? Still, that was not the last time.

Genevieve stood up and went downstairs, frowning at the trail of dirt the contractor had left behind. She put on her coat. She got into her car and drove away and never went back to the house again. She left the attic ceiling open and for all she knew it stayed that way forever.

Many years later, when Genevieve was an old woman, she lived on a freighter ship that traveled the world. She had been all over Europe and South America and New Zealand and Australia. She had been to the Horn of Africa. She had crossed the Black Sea. The crew called her St. Genevieve, for the saint who saved Paris from Attila the Hun. No one called her “Genie.” If anyone asked why she chose to live on a freighter, she would say, “On ships there are no attics.” Once she saw a passenger reading a novel called Aftermath and was relieved when he disembarked in Christchurch, never to be seen again. A small part of her was always listening for someone who used the phrase “Oh, you know.” In recent years, she had become too weak to leave the ship, but she could sit on the deck in her wheelchair, a blue wool blanket tucked around her legs, and watch the activity in the ports. Currently she was bound for Guadeloupe.

In the Caribbean Sea, a young man who had been traveling on the freighter for six months committed suicide. She saw his silhouette, glinting and angular in the sun, on the far end of the deck and then he was climbing and then he was gone. It was a windy day, and it looked as though the weather plucked him right off the boat and dropped him into the sea.

Before they lost this man to the Caribbean, she had not said or thought the word “suicide” for years.

On ships, there were many superstitions. You weren’t supposed to whistle or eat bananas. Fridays were bad luck. So were flowers and pea soup and priests. If you saw a dolphin swimming alongside the ship, you were supposed to make a wish. Genevieve liked to wish for only the most hopeless things. For the universal eradication of attics and sadness. For laws that held cleaning crews accountable. For the warmth of her sister’s body in bed, for sweet chocolate on their tongues, for their laughter at the laugh track on Late-Night TV, for the only person on earth who had ever called her “Genie.” For time to be as retrievable as a bucket raised from a well. For the young man to climb out of the ocean and walk across the deck in the shining sun and, at last, tell her what it was like in the After.

From Conjunctions: 65, Sleights of Hand: The Deception Issue (Fall/November 2015). Published by Bard College, edited by Bradford Morrow. Copyright © 2015 Laura van den Berg. All rights revert to the author(s) upon publication. Distribution or reproduction of this file or its contents by any means or in any medium is prohibited without the express permission of the author(s). 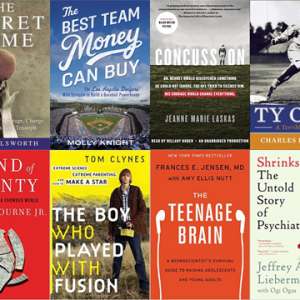 Announcing the PEN Longlists, Pt. 2 PEN/E.O. Wilson Literary Science Writing Award ($10,000):   For a book of literary nonfiction on the subject of the physical...
© LitHub
Back to top