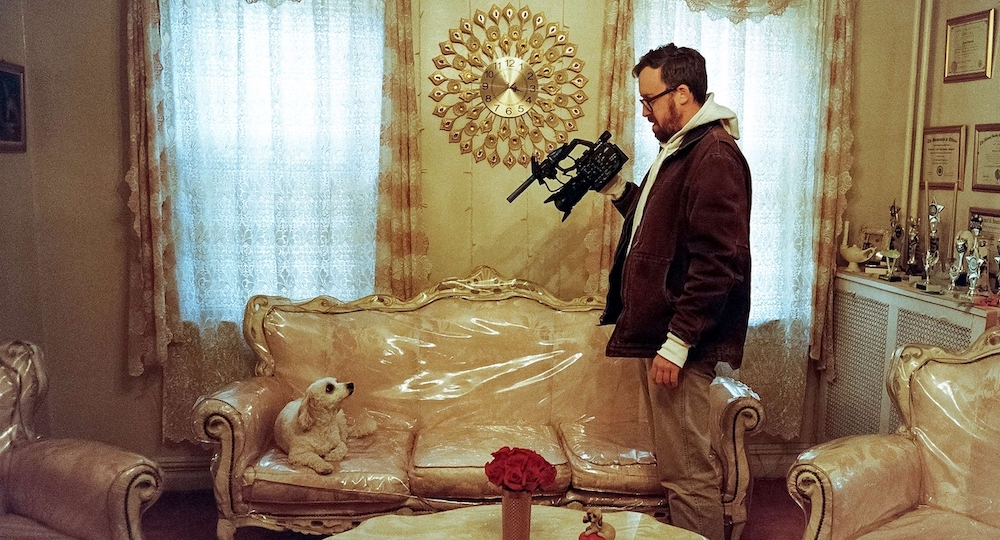 After How to with John Wilson, Will More Filmmakers Use the Tools of Lyric Essay?

Matthew King on the Genre-Bending Portrait of Public Life

In a recent episode of HBO’s How to with John Wilson, the eponymous narrator recounts a painful middle-school experience. Time and again, his friends refused to play Dungeons & Dragons with him, worried he wouldn’t take the game seriously; as a result, Wilson rejected fantasy altogether. “I started to only read books about real stuff and became obsessed with the authenticity of documentary filmmaking,” he says in his nasally voiceover.

Then, a twist: Wilson juxtaposes his conviction with footage of a busy street corner, where a camera and boom mic invade the personal space of a violin performer. Through a clever bit of audio-visual collage, Wilson’s original statement becomes ironic, his claim to authenticity undercut by the bulky apparatus of the documentary machine.

What’s considered “real” in literature is a perennially fruitful subject for debate. Novels steal from life, nonfiction bends the truth, and once in a while, provocateurs try to blow up any meaningful distinction between the two. In his 2010 manifesto, Reality Hunger, ex-novelist David Shields argues for a collage-based art form commensurate with our fragmented digital culture. “Story seems to say that everything happens for a reason, and I want to say, No, it doesn’t,” he writes in one of over 600 literary fragments (some self-authored, most cribbed from other voices, all arranged into topical chapters such as “hip-hop” and “reality TV”).

Like many aspiring nonfiction writers, I’ve been infatuated with the idea of literary collage and the work of genre-busting luminaries like Maggie Nelson and Claudia Rankine, who use the form to bridge multiple modalities and intellectual discourses. How to seems to emerge from this crucible of expansive inquiry, embodying in particular the lyric essay form which Shields has described conversely as “a fact-hungry pursuit of solutions to problems” and also “what happens when an essay begins to behave less like an essay and more like a poem.”

Each episode of How to begins with a kind of sales pitch for the faux tutorial at hand. In the pilot episode, “How to Make Small Talk,” Wilson says, “Small talk is the glue that binds us all together, and the armor that shields us from each other’s darkest thoughts.” The thesis is merely the departure point, a springboard into any number of pop-culture tangents or personal associations, each one adding a metaphorical layer of meaning around the central, timeless theme. Explorations into wine appreciation end up in the living room of an antique war rations collector. Seemingly benign questions about urban scaffolding and downtown parking spots lead to unsettling encounters with a foreskin enthusiast and an owner of a desirable Queens cemetery plot. While grappling with the social dilemma of how to fairly split a check, Wilson crashes a dinner party of referees in Long Island.

The show is difficult to categorize, which is part of its appeal. Alternately described as a docu-comedy, a series of anthropological rabbit holes, and “video art magic,” How to steers the gonzo mockumentary format, pioneered by showrunners like Nathan Fielder, Eric Andre, and Jena Friedman, away from gotcha hijinks into more contemplative territory. Fielder, an executive producer for Wilson’s show, originally pitched it as “Planet Earth, but for New York,” and the show is perhaps most commonly described as a kind of nature documentary. But there is also a distinct personal narrative developed throughout; as Wilson expands his cinematography to New Orleans and Las Vegas, and refracts new subjects through the quirky prism of his Sony FS5 and second-person narration, we also learn about his peculiar neuroses and tribulations.

“Once you decide something is a piece of trash, it becomes hard to see it as anything else, even though there’s still a part of you in there somewhere,” he muses in one episode, which begins as a tutorial on how to throw out batteries. Other entries about real estate and home cooking introduce viewers to Wilson’s generalized anxiety and OCD, his Brooklyn landlord who becomes “Mama,” the disillusioning path of a 21st-century filmmaker who finally lucked into a first-rate contract, but only after years of under-the-table gigs for PIs and mind-numbing infomercials hawking processed meats. In an episode on spontaneity, we learn that Wilson and his girlfriend have been quarreling over his allergy to commitment; when he hatches a plan for a couples’ massage in the country, they arrive to find the spa is booked for months.

It’s exciting to see filmmakers incorporating the tools of the essay to reflect more multifaceted views of contemporary life.

In other words, How to breaks the conventional documentary box of supposed objectivity by foregrounding its self-interrogating narrator. I’ve been hard-pressed to find precedents in film or TV of this blend of sociological reportage and pseudo-confessional memoir. Some examples include documentaries like Sherman’s March (1986), in which filmmaker Ross McElwee entwines a research project about the Union general’s bloody Civil War campaign with a present-day narrative about the women in McElwee’s life (and the looming threat of nuclear holocaust during the Cold War); in Who Killed Fourth Ward? (1978), James Blue investigates the deterioration of a Houston neighborhood, even as it sits adjacent to new high-rise office towers, foregrounding his collaboration with Black journalists like Tom Wright and continually questioning his own position (and sometimes inadequacy) as a filmmaker tackling systemic crises. I’ve scoured the web for examples of Richard Rodriguez’s video essays that aired on public news programs in the 1990s, for which he won a Peabody, and the likes of which remain scarce on TV today (and no, Jim Gaffigan’s hokey commentaries for CBS Sunday Morning don’t count.)

It took Wilson some time to perfect his unique approach to the lyrical video essay. Long before HBO came along, he published a series of self-produced episodes hosted on Vimeo (and later recognized through their Staff Pick program). These earlier entries—on subjects like living with regret and how to keep smoking—tend to be baggier in form, the montage sequences less focused, the narration often dropping away entirely for up to a minute or longer.

From a craft perspective, it’s thrilling to watch Wilson discover his form, arranging found footage into clever refrains, approximating the rhythm of prose through a series of visual metaphors and puns. In some ways, this evolution mimics the path of popular essayists like Jia Tolentino and Samantha Irby, writers who found their voice and form (and audience) through blogs and online zines before releasing their first book collections.

From the beginning, How to has relished in the cultural abundance of New York City, much like another Vimeo-to-HBO production, High Maintenance. Rather than a weed delivery guy dropping into fictional set-piece apartments, Wilson roams the streets with his handheld camera, stealing glimpses of public life, sneaking through back doors and unlocked gates, often trespassing without trepidation. In her review for the New Yorker, Alexandra Schwartz noted, “At moments like this, it’s worth pondering the private worlds that Wilson, a bespectacled, bearded white dude, is given access to, and the ones he isn’t.”

Although Wilson is typically the outsider, there are moments when he seems to wield the advantage, when his handheld camera lingers on a particularly outrageous personality or perceived outcast. While it feels sincere when Wilson probes an “EDM bro” about his friend’s death, the schtick veers on icky when he asks a man to repeat his belief that he’s the reincarnation of John Adams. On the flip side, it’s this same subterfuge that generates some of the show’s most remarkable moments. While Fielder’s Nathan for You invents ridiculous capitalist scenarios, How to finds them alive and thriving in the wild, whether an obscure industry conference (like the Conference of Conference Organizers) or a niche consumer market (for, say, Avatar obsessives).

Fans of the show may worry that Wilson’s auterish gem might lose its subversive edge as it becomes further enmeshed in the HBO machine. In a sense, I’ve worried about this ever since I discovered the series and suspended my disbelief at the tight-rope performance, the fine line between inquiry and lyricism. Whatever production chops HBO brings to the table, the team has helped shape the first two seasons of How to into a still at times uneven but mostly spellbinding panorama of urban ephemera and modern existentialism. Whether by choice or directive, Wilson is relishing what must be an obscene budget for such a shoestring production.

The newest episodes adopt a similar calling card to late-night shows like Last Week Tonight, with fade-to-credits sequences featuring a preposterous, blown-up prop of some memorable motif (like a custom Volvo-shaped casket inspired by Wilson’s car). He’s even hired into a new writer’s room comedians like Connor O’ Malley and literary nonfiction icon Susan Orlean, whose 1990 travelogue Saturday Night, with its frank and wide-ranging portraits of ordinary lives, has long been a favorite book of Wilson’s.

Whether you’re charmed by his roving mind, annoyed by his hipster grievances, or indifferent to the entire project, it’s exciting to see filmmakers incorporating the tools of the essay to reflect more multifaceted views of contemporary life. By blending documentary with metaphor and self-interrogation, TV and film can approximate the rich texture of a lyric essay or literary collage, holding together multiple layers of meaning that operate at different levels—personal, social, historical.

Sometimes, Wilson’s on-the-street snapshots, the miraculous things he captures that might have been lost forever, remind me of public access projects like the GBH Archives, with its everyday footage of life in Boston in the late 1970s and early 80s; these clips unfold like white noise or Slow TV, the urban equivalent of a digital yuletide fire. The uncanny timing of Wilson’s first season, much of it filmed in late 2020, makes his vault of footage a rare, robust time capsule of pre-pandemic life in the city. As Wilson continues to amass new chronicles, he may create something approximating Frederick Wiseman’s countless documentaries of schools, prisons, hospitals, and more—some entries brilliant, others middling, but together providing an unparalleled view into American public life.

Matthew King is a freelance journalist and essayist based in New York. His writing about technology and culture has appeared in The Atlantic, Boston Globe Magazine, Pacific Standard, and The Baffler, among other publications. Follow him on Twitter at @_mattking and on the web at http://matt-king.me. 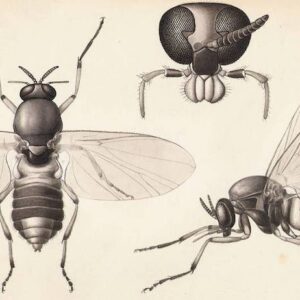 Insects have been involved in an intricate dance with almost every aspect of the terrestrial environment for millions of years,...
© LitHub
Back to top