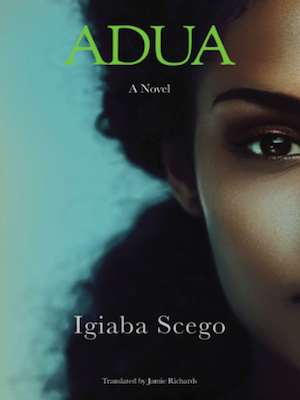 The following is from Igiaba Scego’s novel,Adua. Adua, an immigrant from Somalia to Italy, has lived in Rome for 40 years. She came seeking freedom from a strict father and an oppressive regime, but now that the civil war in Somalia is over, her homeland beckons. Igiaba Scego is an Italian novelist and journalist. She was born in Rome to Somali parents who took refuge in Italy following a coup d’état in their native country.

I am Adua, daughter of Zoppe. Today I found the deed to Labo Dhegax, our house in Magalo, in southern Somalia. It was tucked away in an old pewter case I had in storage; it’d been there for ages and I’d never noticed.

Now I have my papers. Now if I want, I can go back to Somalia too.

I have a house, and most important, an official document stating in writing that it belonged to my father, Mohamed Ali Zoppe. Therefore, it’s mine.

Finally I’ll be able to clear out the squatters who’ve occupied it since those sad years of war.

Labo Dhegax means “two stones.” A strange name for a house, perhaps not such an auspicious one. But I wouldn’t dream of changing it now. It wouldn’t make sense.

Legend has it that my father, Mohamed Ali Zoppe, once said: “These are the two stones, the labo dhegax, upon which I will build my future.”

Who knows whether he really said that? Sounds like something out of the Bible.

Fact is, by now the legend has taken root in our hearts, and I must say, regardless of its truth the family is still attached to it.

Every night before I fall asleep, I wonder if I too, like my father, will be able to build what future I have left in our land.

I asked Lul if she’d check on Labo Dhegax since she was leaving Rome soon.

I said: “Please, I’m counting on you, abaayo, to find out every little detail about my old house.”

It was a windy day. Our scarves fluttered over the buildings of the capital.

I hugged her and said: “Don’t forget Labo Dhegax. Don’t forget me, sister.” She didn’t make any promises.

Lul was the first of my friends to go back. She called after a week in Mogadishu and said, “The air smells like onions.” She didn’t say much else. I asked her question after question. I wanted to know if our country had really changed that much and if those of us who’d been away for over thirty years could reconnect with the new, the brand-new, peacetime Somalia.

“Is our dream going to last?” I asked her. “Is it possible to make a home there?” I pressed.

“That’s peace, honey,” she sneered. “If you care about your two stones, come.” Peace. Before August, I’d thought peace was a beautiful word.

No one ever told me that it’s really an ambiguous one.

Now it’s all about business for the Somalis. For Lul …

But I’m still in Rome and from here it all seems so strange. I love Rome in the summer, especially the light in the evening when the sun is setting. It’s hot, even the seagulls seem nicer and make you want to hug them.

They dominate the piazzas, but here you are, my little elephant, and they don’t dare. Shoo, away from Piazza della Minerva! I feel safe when I’m around you. Here, I’m in Magalo—at home. My father had big ears too, but he was never good at listening, and I was never able to talk to him. It’s different with you. That’s why I’m grateful to Bernini for having made you. A little marble elephant holding up the smallest obelisk in the world. A toothpick. Don’t take that the wrong way. I need you, you know.

Lul is gone and I don’t know if I’ll ever see her again. But you remind me of her. You’re a good listener. I need to be heard, otherwise my words will fade away and be lost.

“Look at that black lady talking to herself,” people say, pointing at us. But we don’t pay them any attention. We understand each other perfectly, you and I. After all, we’re both from the Indian Ocean. Our ocean of magic spells and scents, of separations and reunions. You’re a nomad, like me.

I know Lul, she’s a good person, and for that very reason is the sneakiest sort of charmer.

Lul is first in my thoughts. What is my friend doing in Somalia now? What business has she gotten into?

What if I really went and joined her? My suitcase is ready. I never unpacked.

It’s been ready since 1976. I should put the suitcase along with my tired body on a plane headed for Ankara and from there direct to Mogadishu.

But that’s just a fantasy.

Yesterday there was this girl on the tram. She was black and had a shaved head and thick legs. We were on the fourteen where it turns toward Porta Maggiore. She’d been staring at me since Termini. I was irritated by her hard gaze. I felt like turning around and saying “Stop,” like mixing my mother tongue with Dantean Italian and creating one of those scenes that make public transport in Rome entertaining. I wanted to be vulgar and go overboard. I wanted a big scene, that way I’d stop thinking about Lul, about Labo Dhegax, about the strange peace in Somalia. But the girl got wise. She sauntered over and virtually without warning shot me her question: “You’re Adua, right? The actress? I saw your movie.” And then after a pause, as if she’d planned it out, she added: “You really make an impression, you know that?”

I was completely rattled.

My movie? There was actually someone who still remembered that movie?

An American Bookseller Reports from a Glamorous Italian Bookfair 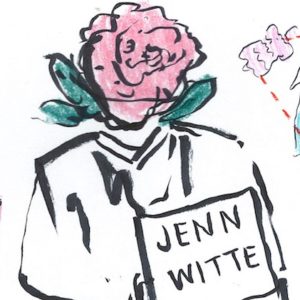 An American Bookseller Reports from a Glamorous Italian Bookfair Bookseller Jenn Witte (Skylight Books) was one of three recipients of a scholarship sponsored by Europa Editions and Other...
© LitHub
Back to top