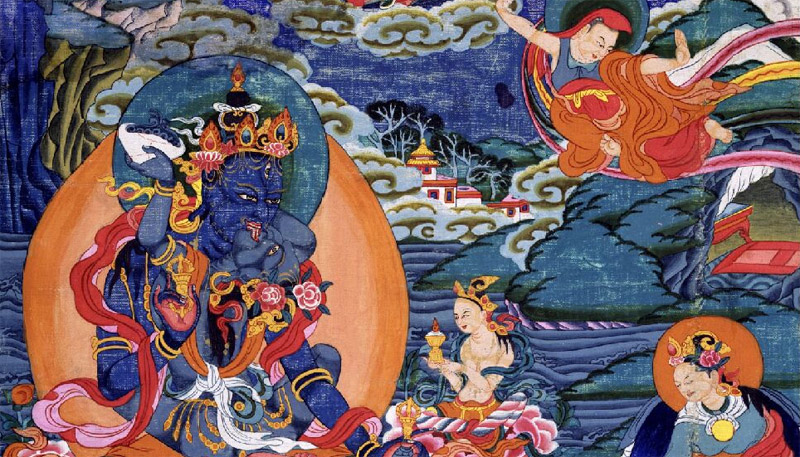 Ghosts, Prisons, and An Intermediary Void

For a brief fortnight, their situation changed little. They meditated and dozed in turns. Their oppressed breathing was palpable. Sometimes, a jolt of somewhat forced joy would shake Puffky, with mad hiccups and shivers. The jukebox was the ultimate consultable archive, the sole spark of intelligence. It grumbled continuously and softly. Everything would have been different if we could have determined whose memories it was adulterating.

—Bardo or not Bardo

The part about death in fiction.

The afterlife in fiction is depicted in many different ways: as one big party, a place for reflection, a pit of despair, or an ineffable mystery. Ghosts are ever-popular in anglophone fiction, the lingering shades of dead providing insight, comfort, horror, and blame to survivors in equal measure.

Originally, Purgatory was envisioned by the Church as a condition of the soul, but it is thanks to Dante that the popular notion of Purgatory as a physical place arose. In this liminal realm, the spirits of dead sinners must be purified through pain and tribulation before they can ascend to Paradise.

Similar to the way that Dante borrows from Catholic cosmology for his Divine Comedy, Antoine Volodine draws on the hierology of Tibetan Buddhism to set the scenes of Bardo or not Bardo, a post-exotic black comedy about the deceased who cross through the dark space of the Bardo for seven weeks on their way to reincarnation or enlightenment.

According to the Bardo Thödol (also known to the West as the Tibetan Book of the Dead), the Bardo is an intermediary void where the departed soul must wander for forty-nine days, confronted by terrifying deities and illusions. In the realm of the living, a lama reads from the sacred text over the corpse, so that the dead pilgrim may have a chance to heed the wisdom of the Buddhist path and attain Nirvana, rather than be forced back into the endless, painful cycle of life, death, and rebirth.

From my point of view, I was the one speaking, but, ultimately, I was just one character among many others in a dream dreamed by someone else. This idea made me dizzy.

The part about the high-security prison.

The 49 days and 49 nights of the Bardo are a temporal space where the no-longer-living, no-longer-dead traveler can wander and wonder, endure travails and travel into death. This strange span of time functions, in some ways, as a waiting room—or a prison. Which makes the Bardo so interesting for Volodine and his heteronyms, because everywhere in the post-exotic universe there are rebels, anarchists, dissidents, and writers to be found. The stories of this universe are often set in post-apocalyptic or post-revolutionary moments, when revolutions or regimes have been collapsed and death has been widespread. In such circumstances, failed revolutionaries and failed poets can only end up in prison.

So far, four (or maybe five) post-exotic authors have published books in French: Lutz Bassmann, Manuela Draeger, Elli Kronauer, perhaps Mariya Sudayeva, and certainly Antoine Volodine himself—and it is Volodine who acts as a physical presence for all of them, who brings all these books from the post-exotic universe into our own. “Behind this narration was a narrative background, a ‘backfiction,’ guided by exterior and manipulative voices,” he said in an interview last year. This “backfiction” is the massive prison in which these writers—and many, many others—have been locked up; Post-Exoticism in Ten Lessons, Lesson Eleven devotes its very first lesson to a “Fragmentary Inventory of Deceased Dissidents,” with each name given the year of incarceration in a maximum-security wing.

“Cloistered in individual cells, they communicated with each other by tapping on the pipes and walls, or whispering through the door hatches or the space beneath the door,” Volodine explains in “The Fringe of Reality.” “In this way, they created a vocal and intellectual network. This network was polyphonic, but thoroughly solidified by shared experience and shared perspective on history and humanity’s fate.” And so, while individual books may bear the name of Manuela Draeger or Antoine Volodine or Elli Kronauer on their covers, they are in fact authored by all of these writers in the same prison, who have been speaking to each other, telling stories that they have heard and repeated and altered and murmured through the stone walls of their solitary-confinement cells.

They tell these stories because they are waiting with nothing else to do. They sit in their prison cells and they wait for judgments and releases that will never come. Years go by in this way. Prisons are a sort of real-life Bardo, from which only death will release them. And so it comes as little surprise that the Bardo Thödol would become the sole real-world text they could possibly internalize, and a perfect mythos for the existence they are enduring.

Don’t worry if there’s not much space left to explore. The pleasures of discovery depend only on you. You can at any moment pretend that you know nothing, that everything you see is new. You just have to wander here like a dead man heeding the instructions of the Book of the Dead.

The part about the Bardo Thödol.

The imprisoned writers draw on their own pasts and their shared philosophies to invent and retell their stories, and they allow one outside book to influence their post-exotic stories: the Bardo Thödol. The prisoners claim a sympathy with the sacred text and its descriptions of dark spaces. Before the guards organized his suicide, Julio Sternhagen ran the prison library, and his opinion of the Thödol was a high one.

The Tibetan Book of the Dead promises liberation from eternal imprisonment—be it the prison of the world, or the high-security prison in which radical revolutionaries serve their life sentence. The instructions of the Bardo Thödol provide a framework both narrative and oneiric for the heroes of post-exoticism, as the authors lovingly treat the text as if it were one of their own, and so reappropriate its contents among the stories they whisper to each other through the cell walls and iron bars.

“Only those I love, listen!” exhort the explorers Fuchs and Monge in Lutz Bassmann’s We Monks & Soldiers, perhaps mimicking the Bardo Thödol’s entreaties that the noble son or daughter heed the lama reciting the text. The two shout this while crossing a dark space in search of a “backup proletarian universe.” What they find is disappointingly disastrous.

Another Bassmann book, The Eagles Reek, is about the last day of Gordon Koum. He sits in the bombed-out rubble of what was formerly his home, family and friends all vaporized. The radiation is slowly killing him, so he talks to himself, tells himself stories, projects his voice into a doll and a robin corpse. Similarly, in Manuela Draeger’s Eleven Sooty Dreams, the young adolescents trapped in a burning building after one year’s Bolcho Pride parade goes awry trade memories with each other as their lives are engulfed in flames.

Everyone is telling stories while waiting to die.

The can was rolling on the dirty tiled floor of the corridor. Dondog tapped it ever so slightly with his left foot, I think, but it kept rolling. Thick, feeble light kept him from making out whether it was a can of beer or Coke. Empty, light, the aluminium cylinder stayed its noisy course.

In the Tibetan Book of the Dead, one’s soul must confront numerous illusions of life and suffering: past memories, cruel godlings, surreal landscapes that are part-Dalí, part-Bosch, part-nothing, and so on. Through all this, the pilgrim must keep his or her thoughts focused on the brilliant Clear Light, a dazzling luminosity that exists to absorb one’s being and allow the deceased to attain Nirvana.

The protagonists of Bardo or not Bardo, however, do not stick to the prescribed path. Some prefer the empty tranquility of the Bardo to the pain of living or the ego-death of enlightenment. Others cannot or will not understand the admonishments of their lama, as in the afterlife the voices of the living come through muddled, like on a radio with poor reception, or through a dense partition. Some even have no idea that they are dead—They think the dark place they find themselves is actually a hospital or cellar or bar.

Things do not always go smoothly on the side of the living either, though. Sometimes a suitable copy of the Bardo Thödol is not on hand to read to the deceased, and so a cookbook or poetry collection must be substituted. The effect this has on the errant soul is ambiguous.

The dead may not reach enlightenment, but they do sometimes reach a sort of peace: peace with the past, peace with those who have died before them, peace with their own suffering. In the world of Bardo or not Bardo there is still sometimes beautiful music to be heard, melodies for the lonely and broken hearted.

“They’re lying,” Puffky muttered. “You very quickly lose the ability to listen. There you are, unmoving, deaf to admonitions, when there are any. You’ve stopped thinking. You float open-mouthed under the soot, as if you were completely detached from your fate. You’re not interested in the past or future.”

—Bardo or not Bardo

Moralistic exhortations are rooted in the salience of death. Life matters because it has a quantifiable end. Is there any moral, then, to be drawn from a book that subverts the Buddhist cycle of reincarnation? If the characters of Bardo or not Bardo had followed the script and obeyed the instructions of the Thödol, would their (new) lives be any better for it? If instead of being reborn in a new human or animal womb, what if these dead anti-heroes attained the ego-destruction of pure enlightenment? Then, of course, they could not be judged as happy or sad, but detached from the suffering of the world. We might judge Sisyphus to be happy rolling his boulder around Tartarus, but if the errant deceased of Bardo or not Bardo heeded their lamas, we couldn’t judge them to be anything at all. Is self-annihilation so desirable? Is the opposite? Perhaps the answer is encoded in the text of Bardo or not Bardo, written in the crypt language of post-exotic clandestinity and malfunctioning jukeboxes, muddled by secrecy and oneiric distance.

J.T. Mahany is a graduate of the masters program in literary translation at the University of Rochester. He is currently translating several books by the enigmatic and intriguing French author, Antoine Volodine. 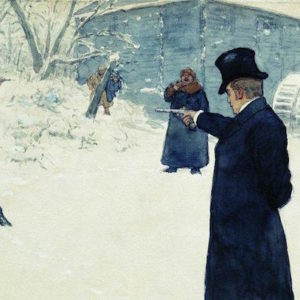 We fought a duel. BARATYNSKY[1] I swore I would shoot him by the rules of dueling (I had not yet taken...
© LitHub
Back to top