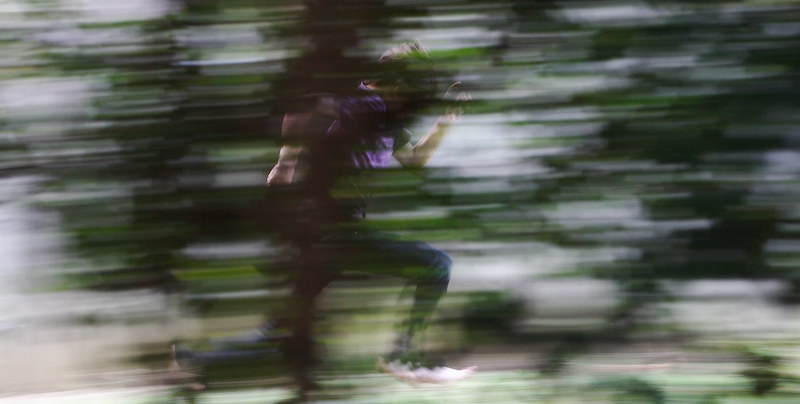 “You relax, a psychologist friend observed, by hyperstimulation.”

People say runners must be running away from something. Death or a bad diet are the most common suggestions, and while there might be something in the bad diet—not that mine’s bad, exactly, lots of vegetables but also lots of chocolate which I get away with because of the running, though I want the chocolate because of the running so that’s a moot point, really—I’m not running because I imagine it brings immortality. I don’t want immortality. I don’t understand people who want immortality, have they not read The Portrait of Dorian Grey or the story of Tithonus or pretty much anything? Life without death would be as pointless as a story without an ending, and it’s not as if the planet is so short of people we need a backup supply in the freezer.

I started running for the opposite reason, not to postpone death but to make the most of life. I saw my beloved grandmother pass the last twenty years of her long life in increasing pain and indignity as her bones crumbled and the fear of falling tightened around her. She used to climb mountains. She used to ride bicycles up mountains, back in the 1930s when she was a girl and no-one had told her you need special equipment for that kind of thing. She used to kayak on Scottish lochs, and even later in life, when I remember her, she swam twice a week in the pool at the glamorous hotel where we could help ourselves to big fluffy towels and the water temperature was perfectly bearable even when I first went in.

When I stayed with my grandparents during school holidays we swam together and she took me out for lunch afterwards, prawn sandwiches and cake. But by her early 80s, still with fifteen years to go, she was scared getting in and out of cars in case she lost her balance, because if she’d fallen she would have broken bones and her bones didn’t mend, and scared of stepping off curbs and though she could probably still have swum and swimming would probably have helped, she couldn’t have managed the changing room or climbed into the water. Instead she took to her green velvet chaise longue with a pile of novels and a glass of whiskey, which was all very well in some ways, enviable even, but when you do that it gets harder and harder to do anything else and soon she couldn’t manage the stairs and needed special handles in the bathroom and didn’t want to go anywhere where there might be stairs and might not be special handles in the bathroom.

Her physical world got smaller and more frightening and then the world in her head got smaller and more frightening and the last few years were hard on everyone but especially her and my mother, who was taking care of her. So it’s not death I fear but decline, and while I know that plenty of people live long and happy and useful lives without ever running or even walking, that good lives happen in all kinds of bodies using all kinds of aids; while I know that health and strength in old age are partly matters of luck, I also observe as my parents’ generation ages that there’s a lot a person in midlife can do to change the odds.

I’m keeping everything spinning, the dance of fingers and feet set to the rhythm of the heart and lungs, the mind’s pace set by footsteps and stitches, beating and pacing, being alive.

Also, it turns out, I like running. That is an understatement. I like running the way some people like heroin. I don’t know if there’s any physiological basis for talking about a running addiction, but I can’t function without running at least a few miles a few times a week and preferably at least ten miles a day. Well, ten or fifteen, or sometimes eighteen if the light on the sea is good and my knees are holding up. I understand that running ten miles a day isn’t the best way to train your body to go fast, and also that there’s a high risk of injury in running that kind of mileage on asphalt month after month, and also that there should be rest days for soft tissue repair, but I’m not particularly interested in going fast and I’ve been doing it for years without injury and my soft tissue seems to be in adequate working order, not that there isn’t a bit of pain from time to time but nothing consistent, nothing that seems like a reason to stop or even pause.

And is that when you think about your books, people ask, which is a nice idea, that all that time is really work, that hour and a half every day plus changing and showering plus core strength routine because that’s why I don’t get injured, but it’s not. If I’m writing or about to write, I think about my book almost all the time except when I’m running or knitting. I listen to podcasts, mostly science and medicine, while I run. I watch films, preferably in French or German, while I knit, or I talk to friends because I can’t sit unless I’m knitting or eating or teaching or reading but even for reading I prefer to pace the room and if we had space and I had the nerve I’d buy one of those treadmill desks, though if I did that it would be only a matter of time before I tried running while knitting while watching a film in German. (I have just stopped writing this to make sure I still can’t afford a treadmill desk, which isn’t even really the main obstacle. I would need to check that I still can’t afford a house big enough for a room of my own in which I could put a treadmill desk, and I live in Dublin so I know the answer to that.)

You relax, a psychologist friend observed, by hyperstimulation. I think of it as layering: if there’s only one distraction, it might stop, but if I have three things going on even if one of them stops the other two will catch me. It’s like the Swiss cheese theory of plane crashes: with enough layers of safety provision, the holes should never line up. If one engine fails, you can land with the other. My ideal form of relaxation, what I’ll aim for if I have an evening alone in a hotel room, is knitting lace from a Japanese pattern while watching a film in French and also eating chocolate mousse with a very small spoon, and in the morning I’d like to run a hilly route across a beautiful landscape while listening to a scientific researcher explaining her latest experiment. It’s the rhythm, I say defensively, knitting is running for your fingers and you get a sweater at the end, but often the sweater is incidental.

I like interesting constructions (that’s why I tend towards Japanese patterns) and I love the colors and textures of yarn and I enjoy knitting complicated lace, but in practice like everyone else I mostly wear plain things in shades of grey, which are deeply boring to knit.  I’m not running to maximize fitness—I’d run differently if I were—and I’m not knitting to wear the clothes—I’d knit differently if I were. I’m keeping everything spinning, the dance of fingers and feet set to the rhythm of the heart and lungs, the mind’s pace set by footsteps and stitches, beating and pacing, being alive. I don’t think it has anything to do with writing. 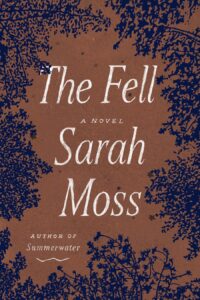 The Fell by Sarah Moss is available via Farrar, Straus and Giroux.

Sarah Moss is the author of Summerwater, a best book of the year in The Guardian and The Times (London), and Ghost Wall, a New York Times Book Review Editors’ Choice and a best book of the year in Elle, the Financial Times, and other publications. Her previous books include the novels Cold Earth, Night Waking, Bodies of Light, and Signs for Lost Children, and the memoir Names for the Sea: Strangers in Iceland. She was educated at the University of Oxford and now teaches at University College Dublin. 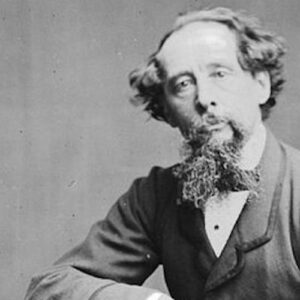 At the end of 1850, Charles Dickens, one of the busiest men in London and currently the most famous writer in the English-speaking...
© LitHub
Back to top
Loading Comments...