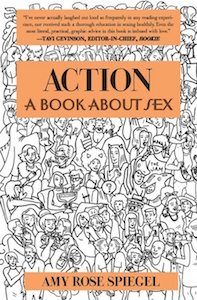 The following is from Amy Rose Spiegel’s book, Action: A Book About Sex. Amy Rose Spiegel is an editor and freelance writ(h)er. Her work has appeared in Rolling Stone, The Guardian, NME, BuzzFeed, Dazed & Confused, The FADER, and many other publications. She came up in New Jersey and currently lives in Brooklyn, New York.

Alone in the Bone Zone

Feeling sexy mostly has to do with YOU YOURSELF—with your inner foundation, regardless of whether another person’s opinion of/attraction to that self sweeps through it. According to Dr. David Schnarch’s book Intimacy and Desire: “A person’s relationship to their self-worth likely informs their relationship to sex more so than lust, romantic love, and attachment. How you see yourself […]profoundly shape[s] your sexual desire.” So if you see yourself as an animate trash bag filled with slime, that correlates to the mucked-upness of the sex you’re having (if you’re even having it).

Even though I am not always a prime-feeling or -looking person, I try my best to conduct myself majestically, regardless of the times when I’ve been, or at least felt, overworked, poor, lonesome, ugly, anxious, depressed, and so forth. Shove yourself in front of the world, and become near-to-deranged with goodwill and hard work, and I promise: Gilding the kingdom of your brain will help you establish a “sex life” by building, first, a multilayered “life,” no modifiers.

Allow yourself to be flooded by your own personality, and make a concerted effort to get rid of the shame that allows you to muffle it “for other people’s comfort.” Most of the time, you’re not comforting anyone by editing yourself; you’re reinforcing that there is one right picture of how to be in the world, and that it likely does not resemble the one that comes to them naturally, too.

You know how everyone wants to make out with David Bowie? His specificity, and his exacting dedication to presenting the world with the person he is rather than the ideal of what other people might think is “sexy” or “masculine” or “human, in any sense” is why we’re convinced he’s so good-looking. (Well, that and his hypercolor eyes.)

The sex-symbolization of a man who willfully tried to pass as an extraterrestrial among us earthlings imparts a cogent lesson: Be and look like you, and do not make a single apology, unless being deferential is a natural and crucial part of that you-ness. Confidence in the character and appearance you’ve got is not only the most attractive thing going, save for an unclassifiable eye color, but also the most actually comforting to others—it’s signing a permission slip allowing them to attend to their idiosyncrasies, too. Consider how people always try to make comedians laugh: They’re attempting to exchange the social currency they think professional stand-ups find most valuable (usually while telling really bad jokes). If what, in your actions, you prove is valuable to you is unique strange foxadociousness, you will attract a trail of other unselfconscious foxes who’ve caught the scent of your freak pheromones. Besides, who wants to fuck a clod? OTHER CLODS, AND HOW THEY FIND THEM IS BY BEING CLODDISH. You are not that clod.

If you are positive in your belief that you are, in fact, the worst and least attractive person who ever slunk shamefacedly through the atmosphere—the anti-Bowie—there are a few ways to dodge that insecurity, which, I’ll argue, is ultimately rather self-centered. I can say that with confidence, since, for a while, I couldn’t bear to say ANYTHING with confidence, and when I let my insecurities monopolize me, it’s the most I ever focus on MYSELF MYSELF MYSELF! When I quiet my life down because I’m afraid it looks funny otherwise, low self-esteem and narcissism deaden the air around me that other living beings could otherwise be taking deep breaths of. Why would I do that, when I can go hunt for archival tour T-shirts at the thrift spot, or try to beat the old heads at chess in the park (never gonna happen), or get ten people I know haven’t met one another, but would true-to-definitely like one another, together in a room? No, I’d much rather stay here in bed, half-dressed, worrying that I’m inert, in large part because I am!!! That’s bad logic, plus solipsistic, plus a snore convention. You know who you are already, so whenever I’m picking myself apart, I remember that I would rather try to extend my hand out to someone else, regardless of who they are, to shake hello.

Of course you have to pay exclusive attention to yourself sometimes, but it’s atrocious to think about yourself all the time, which is what you’re up to if you’re gazing at a Hope Diamond of a dime-piece and ruminating to the tune of, I’m gonna screw up I always say something ungraceful I want to know and then french that person I won’t be able to muster not zero of the nerve to go over there no way not never. The proper amount of you in there, if we were to trim that thought-attack down to its one valid germ, is: I want to know, and then french, that person. Notice how the rest of it takes place in either the future or the past—and how the selected trimming is the sole part of the thought that accounts for a person outside yourself? That’s the only current truth. The rest is YOURSELF YOURSELF YOURSELF, and not even your real self, but some fictitious version of you involved in events that aren’t even actually going down to begin with. Do your best not to focus on that mirage-portrait of a basket case to whom you bear little true resemblance, when you could be admiring the Hope Diamond.

So create an empire of your life and your for-real, functional self—the person other people are waiting for you to present them with: the person who doesn’t otherwise exist. Do, make, and enjoy excellent things. When you find yourself slinking around unattractively, you can call upon the memory that you just Jet-Skied through a wall of fire, or made a Lego model of Seinfeld’s apartment to scale, or learned a new chord progression on your sick-nasty electric keyboard. Or whatever it is you enjoy.

Even if some of this seems beyond reach—especially the part about commandeering a WaveRunner through fire—much more of it is eminently possible. And I feel lucky about that! I think often of something the cartoonist Chris Ware once said in an interview for Rookie, a publication for teenagers for which I am a story editor: “Being able to say ‘I don’t know what to do with my life’ is an incredible privilege that 99 percent of the rest of the world will never enjoy.”[1]I don’t want to squander the arbitrary and overwhelming luck I have to be able to be and do and see all kinds of things and people! I have all this splendor in front of me. It would be a waste of my life to spend it sulking about how unattractive, and therefore unhappy, I am, when there’s no causality there and neither have to be true.

Here’s how to be a hot person, regardless of your externalities: Stuff your life. When you do: You know what? You’ll find that you’re not even doing it to attract somebody, once you get going, because the best thing to do with your life is everything (and also everyone). Look around for the kind of ideal company you’re already keeping all by yourself. If you decorate your world, people will come to gawp admiringly at all of its many ornaments. In looking at the great fortune of your self-possession, others will be tempted to follow your example. (And also fuck it.) You are yourself, and you are brimming.

From ACTION: A BOOK ABOUT SEX. Used with permission of Grand Central Publishing. Copyright © 2016 by Amy Rose Spiegel. 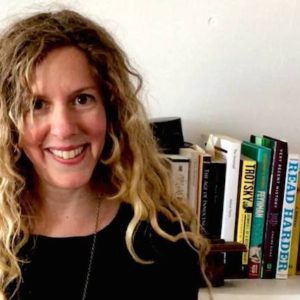 Robin Wasserman: Respect the Power of the Teenage Girl Robin Wasserman is in a strange position, and she knows it: “What does it mean to have a book about teenagers that isn’t...
© LitHub
Back to top