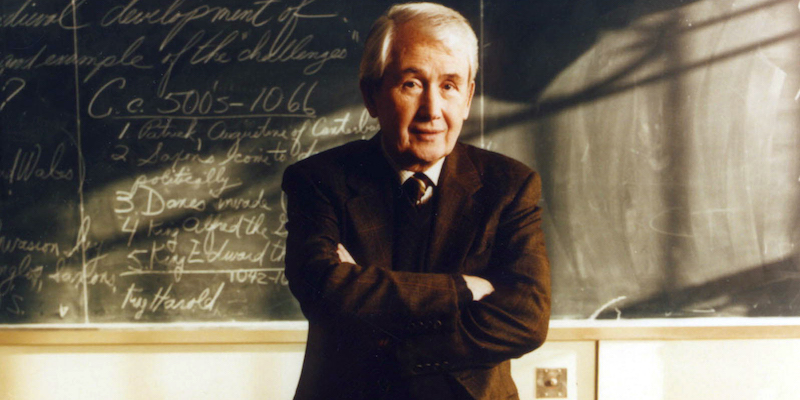 About the time I called Frank McCourt to tell him how much I loved Angela’s Ashes.

Writers on Twitter will sometimes tweet something about how nice it is to get in touch with an author whose work you love to tell them so. I do this only rarely, both because I try to avoid Twitter in my personal life and, perhaps, because I still feel residual embarrassment about the time I got an author’s home phone number via 411 and called his home.

The author was the late Frank McCourt—born on this day in 1930—and though this would be a better story if he’d actually picked up and spoken to the sixth grader in Evanston, Illinois who was so moved by Angela’s Ashes that she felt compelled to track down his home phone number and give him an aural pat on the back, he did not. Instead, I reached an answering machine of a Mr. Francis McCourt, and I declined to leave a message. In fact, I was never entirely sure if I had actually reached the Frank McCourt.

The voice’s distinct Irish accent tipped the scale toward yes, but then again, by 1998 when I read it, Angela’s Ashes was a Pulitzer Prize-winning phenomenon, with its very own backlash and a movie adaptation in the works. At that point, I still thought the Pulitzer Prize was spelled Pulit Surprise, so I don’t think I quite understood that as memoirists go, Frank McCourt was a Big Deal. I just knew that he had written a book I loved, and the idea of telling him what it meant to me was thrilling.

The question of whether I reached Frank McCourt’s voicemail is an extremely low stakes mystery, making it the level of endeavor I felt willing to take on at this moment in time. So I sent an email to his agent, Molly Friedrich, asking if she had an educated guess as to whether, circa 1998, McCourt would have had a listed phone number. Though I was worried my email read like an elaborate phishing scheme, she replied quickly, and with a level of surely that all low stakes detectives dream of.

“I think Frank’s number WAS listed,” she wrote. “His recording for years was something along the lines of, ‘If you will kindly leave a message, I’ll respond with alacrity.’”

I almost remember hearing it, and wondering what “alacrity” meant, or maybe mishearing it for something else (audacity?). I’m glad he didn’t answer, because I almost certainly would have hung up on him. But given the last thing Molly told me, it seems possible that if I abandoned my personality for a second and managed to stay on the line and sputter something out, he would have been lovely about this intrusion on his evening.

When Frank was minutes from dying, I called him from a vacation in the Loire Valley. I told him I loved him, had always loved him. Ellen was at his side and she laughed, told me he was nodding and pointing to his watch, his time was up. He was kind-hearted and charming to his last breath.

So maybe this is an argument for getting in touch with those authors, after all. (Just not by phone.)