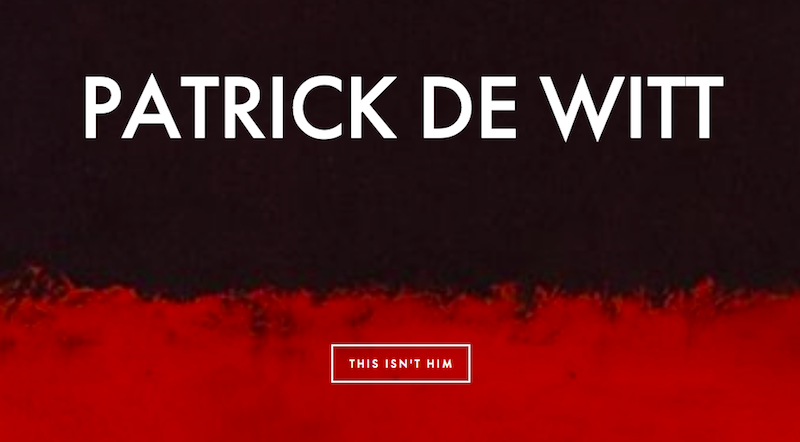 A writer is holding Patrick deWitt’s website hostage—until he reads their manuscript.

There are traditional ways to get a book published—pitches, queries, agents, enduring months and years of soul-crushing work and silence—and then there’s blackmail.

A writer is currently squatting on Patrick deWitt’s website, which they’ll return to the award-winning author if he reads their “very unpublished novel.”

The squatter has not identified themselves (they call themselves a “bad boy” on the contact page), but their demands and motivations are clear:

“Mr deWitt, If you want the site back, just let me know. I’m not trying to blackmail you, your producers, the publishing house or your literary agent. I just want y’all to read my manuscript.

“Oh fuck, I just realized that’s the dictionary definition of blackmail. Sorry, I guess I just meant I don’t really give a fuck about money.”

I discovered the hijacking this morning while looking to see if deWitt has a new book coming out in 2020. Instead I found the first chapter of the squatter’s novel, In God’s Silence, Them Devils Sang, which is described as “an acid western, half-Cormack McCarthy, half-Hunter S. Thompson.”

I can’t tell you if the novel is any good, but this writer clearly is a bold and creative new voice—in the way that letters cut out from a magazine and arranged to form a ransom note is bold and creative. (Whoever you are, there’s your first blurb!)

The site has been in the squatter’s control since at least September 2018, and it appears deWitt hasn’t used the URL since 2014. And, so far, it doesn’t seem like he’s willing to pay the ransom. As Jim Ruland put it, the squatter “picked the one writer in the universe who doesn’t give a solitary fuck.”

I’ve reached out to the squatter through the site’s contact page, and I’ll share any updates if I hear back.

Not Patrick DeWitt has responded. The following was sent from notpatrickdewitt@gmail.com.

Thanks for reaching out hahaha…

And yeah, probably best to stay anonymous, because of the whole “blackmail thing”.

Oh and point of clarification, I don’t really want him to read it, I want his publisher or agent to read it. I chose him completely arbitrarily and then I read an article saying he didn’t use the internet, whereas I’m hopelessly addicted, so I couldn’t tell if this was a good thing or a bad thing in terms of getting away with it.

So a little backstory… I spent five years in an alcohol-induced haze writing this novel and then got to the end of it and started approaching publishers and agents. Partway through the writing process, my pal had recommended The Sisters Brothers because it has a similar setting. My book is about three fucked up brothers who are being chased across America so that one of them can be reconnected with his  estranged family before he dies. Oh and they’re being tracked by a fallen angel.

Anyway, when I opened Patrick DeWitt’s book, I flung it across the room because I didn’t wanna end up stealing anything—and because I was bitterly, bitterly jealous.

I figured that reaching out to his agent and publisher would be a good place to start and both of them linked to a dead website for him. I saw that his site wasn’t taken and thought fuck it, that’s as good a way as any way to demand attention.

Anyway, this was about 18 months ago, just before Sisters Brothers came out as a film with Joaquin Phoenix and John C. Reilly—arguably the most important month of his life and I was stealing his website. I was pacing around my apartment, drinking scotch and sweating when I pushed publish on the website, I braced for the deluge of lawsuits and death threats to pour in.

The biggest actors in the world are in a movie based on a novel he wrote and no one reaches out to talk to him? I was pretty insulted on his behalf.

Occasionally I’d get a confused email about why I’m not him or the digital equivalent of someone scrawling in crayon about why I (not me) was mean to fictional animals in my (not mine) novel.

I’ve worked in a bunch of other media and things have to say writing a novel is about as rewarding as yelling into the abyss. Even my so-called friends have been notoriously flakey in reading the fucking thing.

The novel is a depressing, fragmented, disorienting melodrama, but it does have its bad points too.

Anyway, let me know if there’s anything else you wanna know. The first chunk of the manuscript is on the site. The only thing that could make this any ridiculous is if the book got published on the back of it.