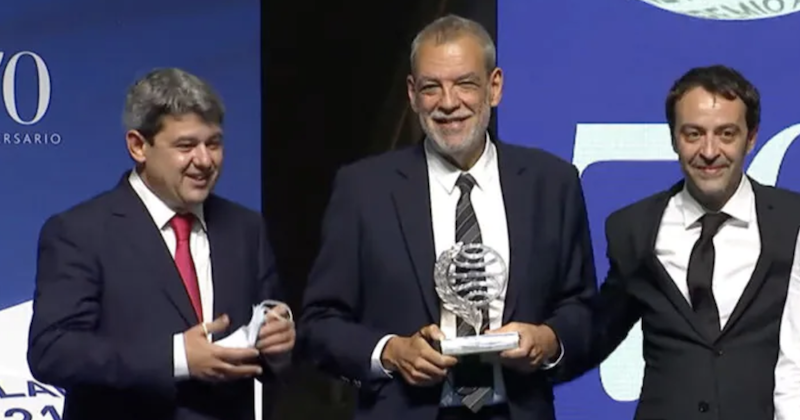 A woman won a million-euro writing prize . . . then turned out to be three men.

This week, the winner of the Planeta Prize, a Spanish 1-million-euro literary award, was announced: Carmen Mola, a famously private crime thriller writer. All that was known about Mola, often referred to as Spain’s “Elena Ferrante,” is that she was a university professor in her mid-40s living in Madrid with her husband and three children; three years ago, she told Spanish newspaper ABC that she used a pseudonym so as not to disrupt “an already-formed life that has nothing to do with literature.” But at the Planeta awards ceremony, the real reason for the pseudonym was revealed: Carmen Mola doesn’t exist. Instead, she is the product of three male screenwriters—Agustín Martinez, Jorge Díaz and Antonio Mercero—who showed up in person to pick up their prize money. According to The Guardian, their credits include television shows Central Hospital and Blind Date.

Some readers were irritated by the idea that the three men had used a woman’s persona to market their crime novels. Most of Carmen Mola’s novels center around detective Elena Blanco, a “peculiar and lonely woman, lover of grappa, karaoke, classic cars and SUV sex.” (The book that won the Planeta is not a Blanco novel; it centers around the search for a serial killer dismembering girls during an 1800s cholera epidemic.) Spanish newspaper El Mundo noted the Carmen Mola identity’s role in drumming up publicity: “It hasn’t escaped anyone’s notice that the idea of ​​a high school teacher mother of three children who teaches algebra in the morning and in the afternoons, then writes novels of ultra-savage and macabre violence in her spare time, is a good marketing operation.”

Beatriz Gimeno, former head of the Women’s Institute in Spain, critiqued the trio on Twitter: “Beyond the use of a female pseudonym, these guys have been answering interviews for years. It is not only the name, it is the false profile with which they have scammed readers and journalists. Scammers.” (Last year, a regional branch of the Women’s Institute recommended Mola’s novel La Nena (The Girl) on a list of work by female authors that help readers “understand the reality and experiences of women at different times [in history] and make people aware of their rights and freedoms.”)

Twitter user Jenne Popay, responding to The Guardian’s coverage of the hoax, wrote, “Men use a woman’s persona—not just a name—to sell novels about extreme violence often against women & in the case of this prize dismembered girls! And they are awarded a prize?”

For their part, Martinez, Díaz and Mercero deny that their choice of a female pseudonym was calculated. “Choosing a woman’s name was not a thought-out thing,” Diaz told El Mundo. “We didn’t want to send any message. We could have put R2-D2 on it, but we named it Carmen Mola.”

“There is something very healthy in eliminating this obsession with the author, to know who they are, how they dress, what life they have,” Martinez added. “If Carmen Mola has worked it is because the readers have liked the stories. Getting rid of the ego is difficult, but we try to leave it out of the room. Deep down, we do not matter so much.”