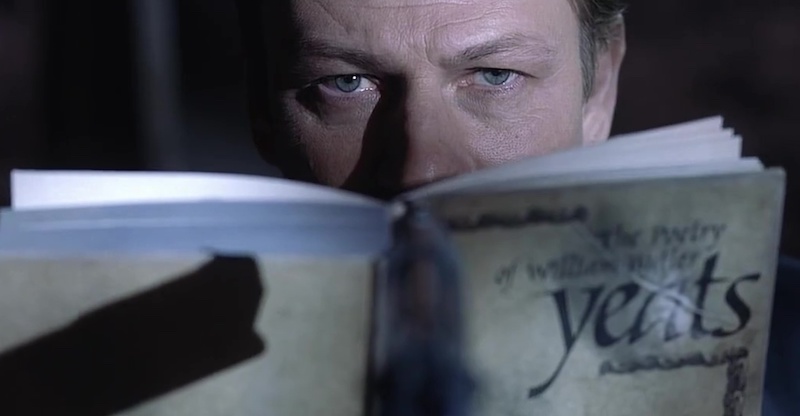 A whistle-stop tour of W. B. Yeats quotations in popular culture.

You can’t beat a good W. B. Yeats quotation, especially in these dour, doomscrolling days. (“The Second Coming”—with its widening gyre, errant falcon, blood-dimmed tide, and slouching beast—has been the English-speaking world’s go-to apocalypse lyric for 100 years now. Whether it’s the Nazis swarming Europe, Trump capturing the White House, or a morose A. J. Soprano attempting to drown himself in a swimming pool, as long as the world continues to be shit, Yeats’ most famous poem will continue to evoke a sense of paralyzing existential terror in its readers.) Though I have absolutely no hard data to back this up, I’d wager that Yeats is the most quoted and referenced (non-Elizabethan) writer in contemporary popular culture. Consider the below:

First of all, you’ve got all the book titles: Chinua Achebe’s Things Fall Apart (“The Second Coming”), Joan Didion’s Slouching Toward Bethlehem (“The Second Coming,” again), Philip Roth’s The Dying Animal (“Sailing to Byzantium”), Cormac McCarty’s No Country for Old Men (“Sailing to Byzantium,” again), and Ray Bradbury’s Golden Apples of the Sun (“The Song of Wandering Aengus”), to name but a few.

In music, Lou Reed begins his 1978 live album, Take No Prisoners, by quoting Yeats (“The Second Coming”); Joni Mitchell made a song of a Yeats poem (“The Second Coming” . . . again) on 1991’s, Night Ride Home, as did Van Morrison (“Crazy Jane On God”) on 1985’s A Sense of Wonder; and The Waterboys made an entire album based on Yeats poems, which was actually pretty-well received.

And let’s not forget our old pal television. Characters in The Leftovers quote both “Cairo” and “The Song of Wandering Aengus”; Narn ambassador G’Kar (reading from his “human book”) recites “The Second Coming” in Babylon 5; Tara quotes “The Second Coming” while reconciling with Willow in Buffy; there’s an Angel episode called “Slouching Toward Bethlehem”; and Tony slouches through a hospital corridor at the close of a season 6 Sopranos episode (which is titled, you guessed it, “The Second Coming.”)

Which brings us, finally, to cinema. Michael Douglas’ Gordon Gekko references “The Second Coming” in Wall Street. Clint Eastwood quotes “The Song of Wandering Aengus” to Meryl Streep in The Bridges of Madison County. A young beatnik reads “When You Are Old” to Kathleen Turner in When Peggy Sue Got Married. Mindy Kaling adopts lines from “He Wishes for the Cloths of Heaven” as her personal mantra in Late Night. And Daniel Craig as Ted Hughes reads “The Sorrow of Love” to a rapt audience in Sylvia. Unfortunately, the internet is refusing to supply me with any of those clips, so you’ll have to make do with the following motley assortment:

84 Charing Cross Road (1987): Rare book merchant Frank Doel (Anthony Hopkins) reading “He Wishes for the Cloths of Heaven” after staring at Anne Bancroft for an uncomfortably long period of time.

Congo (1995): In this scene from the most popular ape-focused sci-fi film of the mid-1990s, Berkley primatologist Dr. Peter Elliot (Dylan Walsh), when asked by former CIA operative Dr. Karen Ross (Laura Linney) why he taught an ape to talk, responds with a line from “An Irish Airman Foresees His Death.”

A.I. Artificial Intelligence (2001): Now I haven’t seen this in about 15 years, but if memory serves it’s the story of a Pinnochio-esque android boy (Haley Joel-Osment) on a quest to become human so that he can accepted by his step-mother. Here he is mid-quest with with his robot pal Gigolo Joe (Jude Law) as some manner of holographic search engine recites “The Stolen Child.”

Equilibrium (2002): In a dystopian society where feelings and artistic expression are outlawed, Errol Partridge (Sean Bean) is caught with a book of poetry and proceeds to drop a little “He Wishes for the Cloths of Heaven” on his unimpressed partner (Christian Bale), before being shot in the face by said partner.

The Children Act (2017): Nobody saw this adaptation of Ian McEwan’s 2014 novel—about a High Court judge who must decide if she should order a life-saving blood transfusion for a sensitive teenager from a family of Jehovah’s Witnesses—though I heard it was pretty decent. Here’s Emma Thompson singing “Down by the Salley Gardens” immediately after hearing that the boy has relapsed.