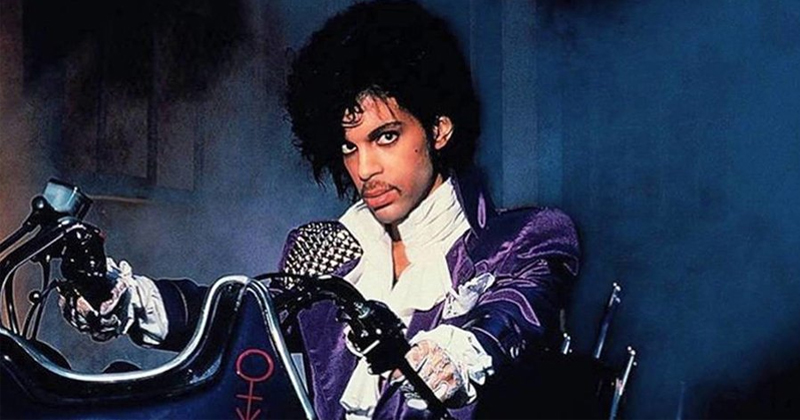 Six Months After the Pop Star's Death, His Studio Opened as a Museum

This is where we found religion. Not our most popular period, but some things are more important than record sales. Besides, the only thing more universal than God is death, and we already have enough tunes about that topic.

Let me tell you a story about a park known for the face it attracts.

Exactly six months and one week after Prince died, I drove to the Minneapolis suburb of Chanhassen in search of Minnesota’s answer to Graceland—Paisley Park. Prince’s iconic recording studio and occasional residence had just opened its doors to tourists, and I wanted to feel the spirit of the artist formerly known as the world’s sexiest MF-er.

According to the song “Paisley Park,” which was released three years before Prince finished construction on the actual building in 1988, this mythical palace was once the exclusive party premises of “colorful people whose hair on one side is swept back.” Now, for those willing to pay $38.50 (for a standard tour) or $100 (for the VIP experience), a physical manifestation of Prince’s legacy was accessible to the hoi polloi, no matter their hair persuasion. The man was gone, but you could stare at the vast infrastructure he left behind.

The first thing you notice when you walk into Paisley Park is that you are being watched—by purple-shirted tour guides, by black-suited security people, and finally by a large pair of eyes planted on a wall facing the lobby entrance. The eyes, like the facility, belong to Paisley Park’s purple-suited proprietor. “Prince sees everything,” said Niccole, my tour guide, who shepherded me and eight other VIP Prince fans from Los Angeles, Seattle, and Fargo through the 65,000-square-foot complex.

Prince envisioned Paisley Park as a business headquarters, a home base, a creative playground, and, finally, a shrine to all things Prince. During our tour, Niccole promised, we would see his private study; his pet doves, Divinity and Majesty; the kitchen where he ate pancakes and watched Minnesota Timberwolves basketball games; and the remains of Prince himself, now resting inside a small purple box encased in a model of the Paisley Park building situated in the atrium.

What we wouldn’t see was any of the rooms on the second floor, the private areas where he presumably lived, slept, and got freaky. And we definitely wouldn’t gain entrance to the elevator in which he was found slumped over without a pulse on that fateful morning of April 21, 2016. A display for 2004’s Musicology tour now blocked the elevator door. It’s not known exactly how often he lived at Paisley Park—he owned more than a dozen properties in the neighborhood, and also was known to have houses in LA and Toronto. What’s clear is that he worked there, hosted concerts, threw parties, and then died in this place.

This was the first day that tours had resumed after community concerns over traffic and safety issues put a temporary hold on the building’s business permit earlier in the month. Chanhassen is one of Minneapolis’s tony suburbs, the kind of place where even the neighborhood Goodwill store is housed inside “classy” red brick, in the manner of all well-off Midwestern communities. This isn’t the kind of town that seeks to establish a tourist attraction. The whole point of moving to a place like Chanhassen is to get away from other people.

When I arrived, I felt a twinge of cynicism. I had read about Paisley Park’s drab, all-white, oppressively rigid exterior—Forbes aptly described it as having the charm of “an Amazon warehouse”—but it was still strange to ponder that Prince conjured wondrous musical universes imbued with the magical powers of sex and God just down the road from a mundane swath of Target and OfficeMax stores. Prince was an extraordinary figure—and yet he chose, like Superman, to live in the most ordinary of environs. Inside Paisley Park, it was much funkier. While the outside walls are strictly Chanhassen-friendly norm-core, the inside walls resemble the sky-blue cover of Around the World in a Day—they’re covered with symbols, gold and platinum records, and dozens of photos of Prince in all his different guises.

“Prince, a notoriously private man who carefully curated his public image, is a person about whom much is still unknown, even among his close associates.”

In his final years, Prince routinely hosted impromptu concerts in Paisley Park’s hangarlike performance space. But the rest of Paisley Park for years remained a mystery to outsiders. “It’s a strange place, even to visit,” GQ’s Chris Heath wrote in 1991. “It’s not anything physical . . . It’s something more intangible, and you see it in the faces of the people who work there. They’re like students taking a long, perplexing exam, trying to work out what the question means before they can start writing. And the question is this: What does Prince want?”

“What does Prince want?” seemed to still be the central question for those now running Paisley Park, as well as those who visited. Inside every room, people asked, “Is this how it was . . . you know . . . before?” That Paisley Park had swiftly been transformed into a museum with the requisite overpriced gift shop might’ve struck some as unseemly, but the whole enterprise was predicated on being the way that Prince would have wanted it. Prince had warmed in his final years to semiregularly admitting outsiders into Paisley Park, and his confidants claimed that he always intended to turn the facility into a kind of Prince Hall of Fame. In a way, opening Paisley Park was the only way to keep Prince alive—it was the one place where he still seemed to be in control, even from beyond the grave. In death, as in life, Prince demanded unquestioning obedience from his staff. That power was still detectable as soon as you walked in the door.

Early on, our tour entered a dimly lit editing room to watch brief clips of unreleased concert footage. Posters for Fritz Lang’s Metropolis and Clint Eastwood’s Charlie Parker biopic Bird hung on the walls. Behind the editing console sat Sean Johnson, whose father, Kirk Johnson, was a key member of Prince’s inner circle tasked with various duties, including the management of Paisley Park. Kirk was with Prince when his private plane made an emergency landing en route from two concerts in Atlanta, the final shows Prince ever performed, just a few weeks before he passed. Johnson was also the one who informed the media that Prince had suffered from “bad hydration” on that plane, though it’s believed that Prince actually overdosed on opioids.

Sean was on hand to answer questions, though he seemed reluctant to divulge even vague platitudes about his former boss. A dark purple couch stood between us, the tourists, and Sean, Prince’s erstwhile employee. (Niccole informed us that we were not allowed to sit on the couch.) When I asked Sean what it was like to work for Prince, he paused, as if figuring out what to say. Someone volunteered that Prince was “difficult.” “No,” Sean said. “Exacting. Who isn’t difficult? Everybody is difficult.”

Some aspects of Paisley Park had to be altered before it could open to the public. The albums on the walls were put behind Plexiglas and the candles flickering in nearly every room were replaced with LEDs. A large room devoted to Purple Rain—outfitted with Prince’s purple motorcycle, stage clothes, and Oscar for best original score—was conceived and at least partly installed by Prince, but not finalized until after his death. (There were also much smaller adjoining rooms commemorating Prince’s other films, Under the Cherry Moon and Graffiti Bridge.)

Other rooms appeared to have been rearranged to suit Paisley Park’s newfound status as a museum. In cavernous Studio A, where Prince recorded albums like 1988’s Lovesexy and 1991’s Diamonds and Pearls, you could peer past the control room glass at Prince’s Linn LM-1 drum machine, a vital contributor to the sound of so many of Prince’s 80s hits. Otherwise, the same multicolored tapestries that Prince picked out to hang on the studio walls remained where he’d left them, only now they were freighted with significance.

“What do the tapestries mean?” a fellow tourist asked Niccole.

“Perhaps they help with the sound?” Niccole guessed. Niccole confessed that there were many things about Prince that she did not know. She read her Prince factoids off well-worn index cards, though she wasn’t all that confident about their veracity. Earlier, she’d explained that the significance of the name Paisley Park, “we think, is that a paisley takes many forms,” the inflection in her voice suggesting a question mark at the end of that statement.

Prince, a notoriously private man who carefully curated his public image, is a person about whom much is still unknown, even among his close associates. (I wonder how many fascinating facts about Prince will never end up on an index card.) Nevertheless, care was taken to preserve Paisley Park the way it was on April 20, 2016, the day before Prince died. In Prince’s office, adjacent to the atrium, there was a stack of books near a conference table devoted to religion and ancient Egypt: The New Oxford Annotated Bible, The Secret Teachings of All Ages, Pharaohs of the Sun. While a pile of LPs topped with Cookin’ with the Miles Davis Quintet seemed staged, the CD tower behind Prince’s desk did not. I can buy that Prince—notoriously averse to streaming music—was a 57-year-old guy who preferred CDs for his workday jams.

Prince’s distaste for 21st-century technology also informed Paisley Park’s no-cell-phone policy. In Prince’s time, restricting access to screens no doubt made Paisley Park its own island. (You also won’t find any clocks there—it’s like a casino.) Now that it’s a museum, I suspect that taking away your cell phone also provides added incentive for visitors to pony up another $10 for a “unique and exclusive photo opportunity” in Studio B reserved for VIP guests. (No photos or videos are allowed otherwise.) This gambit worked on me, anyway. I lined up to have my picture taken next to a 12-foot photo of Prince while the other guests played Ping-Pong on Prince’s table.

The end of the tour wrapped with a swing through the enormous 12,500-square-foot performance area, outfitted with five stages memorializing five different Prince tours. Guests were then led into the NPG Music Club, a nightclub that doesn’t serve liquor in accordance with Prince’s faith as a Jehovah’s Witness. It was there that Prince had entertained Madonna while she was on tour not long before he died, Niccole informed us.

As my eyes traced over a nearby wall, I suddenly froze—staring back at me was none other than Prince, peeking out from behind a curtain. Years ago, Prince had himself painted onto the wall so guests would know he was always watching, even now. 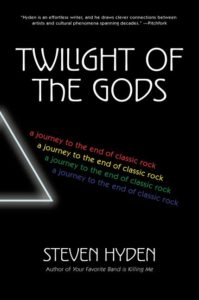 From Twilight of the Gods: A Journey to the End of Classic Rock. Used with permission of Dey Street Books. Copyright © 2018 by Steven Hyden.

Steven Hyden is the author of Twilight of the Gods and Your Favorite Band Is Killing Me. His writing has appeared in the New York Times Magazine, Washington Post, Billboard, Pitchfork, Rolling Stone, Grantland, The A.V. Club, Slate and Salon. He is currently the cultural critic at UPROXX, and the host of the Celebration Rock podcast. He lives in Minnesota with his wife and two children.

This Year's Man Booker International Winner Has a Favorite For Next Year... 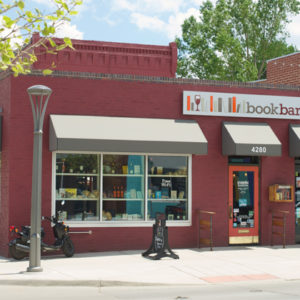 Located in Denver's Tennyson Street arts district, BookBar is an independent bookstore, wine bar, and cafe. What would...
© LitHub
Back to top
Loading Comments...