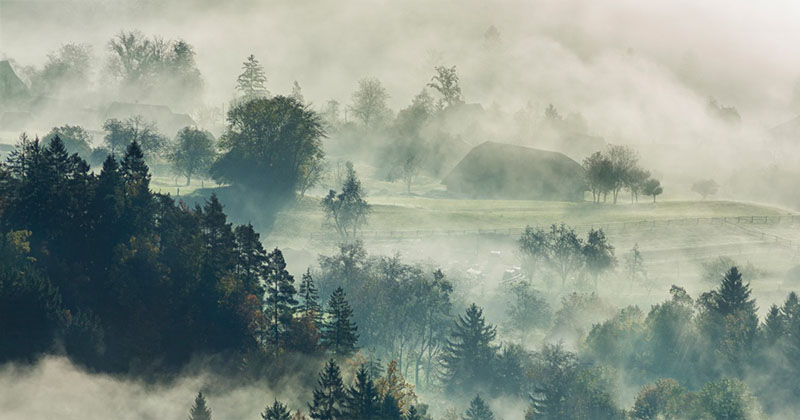 As a reader, what I look for in a novel is the evocation of atmosphere; that transporting element that somehow manages to take the reader into an alternative world. The setting of a book is often the bedrock of this atmosphere. When a novelist succeeds in creating that sensory and psychological space through a particular place, I find that the real physical place that a book is based on can even transform. For me, Stonehenge is forever where Tess spends her final hours in Hardy’s Tess of the D’Urbervilles. Brighton will ever be haunted by Graham Greene’s character Pinkie in Brighton Rock, and any large Victorian hotel will ever have shades of the Overlook, the terrifyingly haunted hotel that Jack Torrance inadvisably makes his home for a long and dreadful winter in The Shining.

In Freud’s influential essay on the uncanny, he investigates the journey of the word “Heimlich”—the origin of which “homelike, belonging to the house” traveled in the way that words can until it engendered its own opposite “unheimlich,” “the name for everything that ought to have remained hidden and secret and has become visible.” In the moment when the accepted and ordinary flips, we see the intersection between the two worlds, and the act of seeing threatens to send us tumbling into the unknown. It’s when the familiar and ordinary take on strange or unfamiliar patterns that we are chilled to the bone.

I’m especially drawn to places with spooky or scary atmospheres, but my favorite novels come with settings that are not fantastical, but locations familiar enough to create that uneasy tension when the unexpected happens in them.

In my novel The Doll Funeral I chose the forest, and in particular the living, working place that is the Forest of Dean in the UK for my setting. It was the perfect space where people and secrets could be lost or hidden, where the past gets buried and where uncovering it is always going to be a dangerous mission.

When settings are really successful in a novel they mean we can experience it as a complete world. Here are some that I’ve particularly enjoyed: 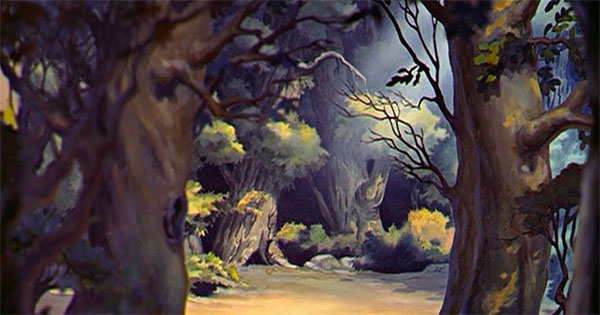 If there is a fairy tale parallel to my novel, it would be Snow White, the story of a young woman who is sent out into the forest to die and who finds methods of survival despite everything. In her ground-breaking book Gossip from the Forest, Sarah Maitland analyses feelings that the forest engenders. It’s not simply, as she puts it “horror about forests”—their wildness, their dark and untamed spaces, but something more complicated and interesting. “The forest,” she writes, “was very beautiful, in a weird and ancient-feeling way. I discovered that, in reality, it was not ‘fear’ that I experienced . . . the forest gave me the same set of feelings and emotions that I get when I first encounter a true fairy story. For me, this is a visceral response . . . a strange brew of excitement, recognition and peril.” It’s these three elements—excitement, recognition and peril—that make the forest into such a potent place for Snow White. It’s a dualistic environment: the forest is where she is lost, terrified, and hunted, but it ultimately becomes the repository for the homely and the good—the hunter who sets her free and the dwarves with whom she makes her home. 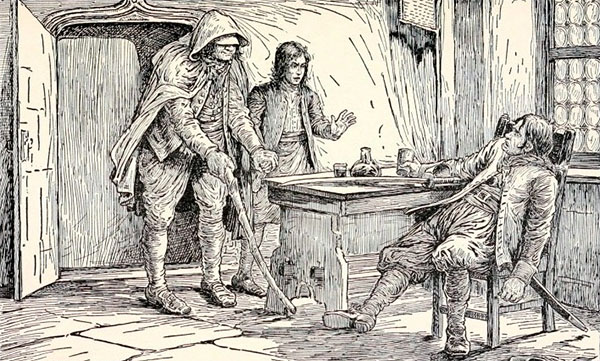 I was obsessed with the beginning of Treasure Island when I was a child. (I always abandoned the book part-way through.) It’s a classic coming of age story where adventure comes knocking for the young hero Jim Hawkins. The Admiral Benbow Inn is Jim’s family home on a remote stretch on the west coast of England. The atmosphere of the place is both sinister and wild, the sea roars up the cliffs during storms and the cove is rocky yet the bay is sheltered enough for it to be an ideal location for pirates. This, and the isolation of the Inn is the reason it’s chosen by a menacing figure, later revealed to be the pirate captain Billy Bones. The lonely untamed atmosphere of the inn and the pirate cove reaches a pitch of terrible menace when an evil vicious beggar called Blind Pew arrives, the sound of his stick echoing through the fog, to deliver to Billy Bones the black spot—a mark of imminent death among pirate crews. Stevenson escalates the atmosphere of the landscape with his brilliant use of sound, the tapping of the stick, the waves crashing,  so the opening of the book is like a wrap around cinematic experience. 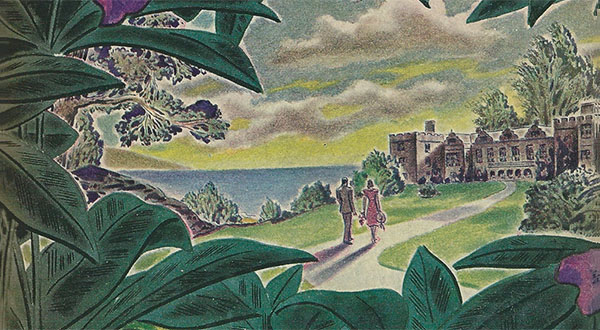 When the newly wedded second Mrs. de Winter arrives at her beautiful new home of Manderley, she is coming to a space which is figuratively haunted. Manderley is a natural paradise, thought to be based on the real location of Menabilly in Cornwall. The beauty of the woods, beach, and sea only serve to amplify the sinister undertone both of the place and her marriage. Winter’s first wife, Rebecca, seemingly inhabits every corner of the place despite the fact she’s dead. She seems to exist in the fabric of the estate, the gardens that she tended, the serpentine drive that she once drove down, the whispering sea beyond the woods, and more than anywhere else, in the west wing of the house, which overlook the sea and the blood red rhododendrons that she cultivated. Manderley is a psychological as well as a physical space, imbued by the past and although we never see a ghost, in many ways it is a haunted house. 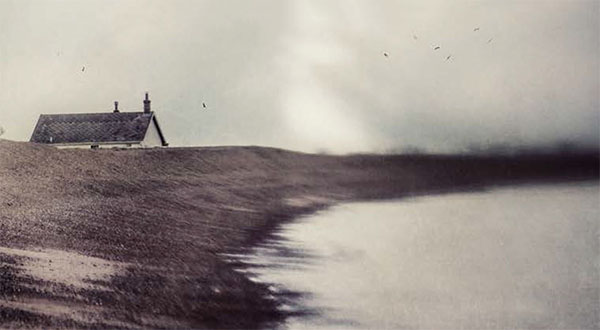 The desolate section of coastline on the Northwest section of the English coastline is the setting for The Loney, Andrew Michael Hurley’s incredible Costa winning debut. Hurley has written about the how the sense of place was one of the main starting points of the novel—the feeling that there was “a sense of imminent menace or dormant power lying just under the sand and water.” It’s a strange tale, set in the seventies—a brew of Pagan practices and Catholicism where Smith and his brother Hanny are taken by his fervently religious parents and a small group of others to an isolated retreat on the Loney. They plan an expedition to a holy well accompanied by their new parish priest with the aim to summon a cure for Hanny who is mute. A sort of metaphysical battle ensues with neither the band of the faithful or the primal forces of the landscape quite being right or wrong. The landscape really is key; paganism and ritual bubble from every corner—uncanny sounding bells ring across mudflats, totems hang from the trees in the woods. The coastline itself is both a source of threat, but also revelatory of the past: the novel begins with the discovery of a child’s body in the bay. As a reader there really is a sense that the sinister events somehow spring from the strange and desolate place. 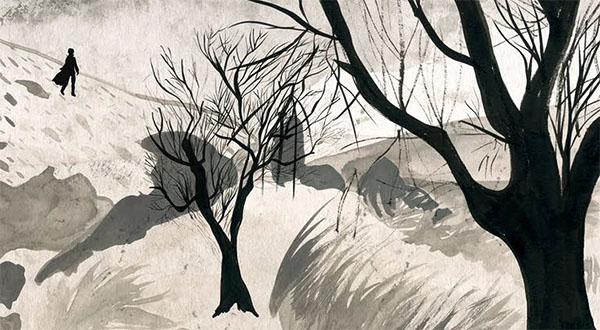 No list about books with a spooky sense of place would be complete without Bronte’s windswept, haunting novel (Wuthering is a local word meaning wild, exposed, storm-blown). The Yorkshire moors have become so linked with the Brontes and in particular this strange, passionate and singular book that it’s hard to imagine a time pre-existing the novel when you visit the place. Charlotte Bronte interestingly used terms embedded in the landscape to describe her sister’s book: “Wuthering Heights stands colossal, dark and frowning, half statue, half-rock. Over much there broods “a horror of great darkness” in its storm-heated and electrical atmosphere we seem at times to breathe lightning.” The Gothic motifs of wildness, ghostly appearances and ramshackle dwellings are all in order but somehow the power of the novel and the incredible nature of those places and landscape mean that it never falls beyond anything that seems completely real. 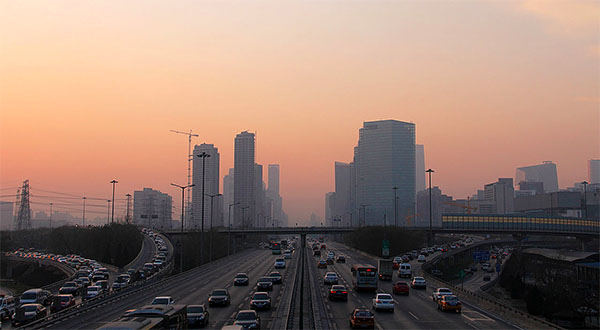 Taxi driver Wang, exhausted from his life in contemporary Beijing, begins receiving mysterious letters from the “Watcher,” someone who claims to be the mate who has accompanied him in all his previous lives. Each letter recounts a life from China’s past and in each the writing glows like a bright jewel. Added to that this is one of the best the descriptions of a contemporary city I’ve read for a long time, Wang’s home—the city of Beijing—comes completely alive in the novel. It’s 2008 and the Beijing Olympics are transforming the city. “Through the windscreen of his taxi, Wang has seen the city change. He has seen the wrecking balls swing, bulldozers levelling streets to rubble and dust, and skyscrapers rising like bamboo after the rain.” The city is so vivid in the book as a reader I feel I’ve breathed in its dust-filled air, walked the crowded streets, and negotiated the six lane roads that run through the city. It’s as “though everything is a façade for something hiding beneath.” This is Barker’s Beijing, evolving, unceasingly changing, yet at the same time layered through with China’s potent and often disturbing past.

Kate Hamer is the author of The Girl in the Red Coat, which was a Costa First Novel Award finalist, a Dagger Award finalist, an Amazon Best Book of the Year 2016, and a winner of the ELLE Lettres Readers’ Prize. She lives in Cardiff, Wales, with her husband and two children.

Why a Party is a Perfect Literary Device 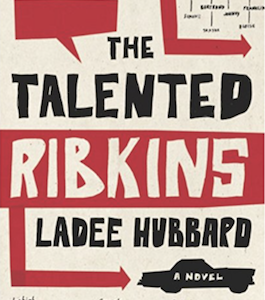 He only came back because Melvin said he would kill him if he didn’t pay off his debt by the end of the week. It was why he left St....
© LitHub
Back to top
Loading Comments...