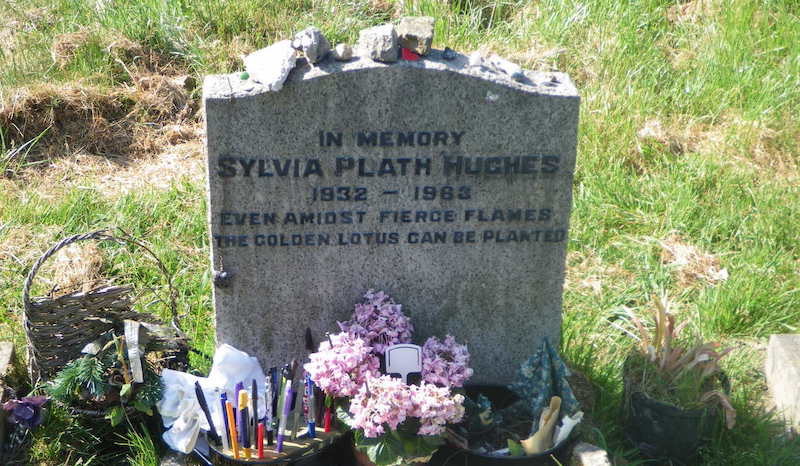 A Sylvia Plath fan has petitioned the Church to allow her to be buried near the poet.

Sylvia Plath’s grave has been the subject of fascination for many since her death in 1963; over the last decades, the poet’s tombstone, which sits in a parish graveyard in Heptonstall, has attracted tourists, “feminist vandals,” and thieves alike. Now, it has snared a lover of literature, who says she wants to be buried in the same graveyard as Plath, the Daily Mail reports.

It’s not a given that anyone could be. The Burial Act of 1853 indicates that only locals, church members, and those who die in the parish are entitled to be buried in a certain graveyard—but citizens can appeal to the Church of England to plead their case if they have a special request.

According to a report published by the Church of England, the petitioner is a 44-year-old woman, a resident of Oxfordshire, and “a committed and confirmed Christian” whose favorite novel is Charlotte Brontë’s Villette. (One must ask: not The Bell Jar?) Her petition explained her case this way:

A few years ago I visited Heptonstall with my mother to visit the grave of the troubled poet, Sylvia Plath, wife of poet laureate Ted Hughes. We did not stay long as the last bus down the steep hill to Hebdon Bridge was due, yet I felt profoundly spiritual in this place.

My siblings and their families know I love literature and will understand why I wish to be buried in St. Thomas’s cemetery in the parish of St. Thomas the Apostle in Heptonstall in Yorkshire.

St. Thomas’s Reverend Karen Marshall was inclined to approve the petition, though noted that it was the first time, to her knowledge, that anyone had requested burial in the cemetery “on account of literary associations.” The Church judge, The Worshipful Mark Hill QC, Chancellor of the Diocese of Leeds, confirmed the approval, given the fact that he was not, he wrote, concerned about “a vast flurry of applications from people wanting to be buried in close proximity to their literary heroes and heroines.”

The petitioner also noted that she would like her headstone to read Resurgam (Latin for “I shall rise again”) because “it is inscribed on a tablet which Jane Eyre adds to her friend Helen Burns’ grave in Charlotte Brontë’s novel of that name.” Which again, makes me wonder: what was wrong with Charlotte’s graveyard?