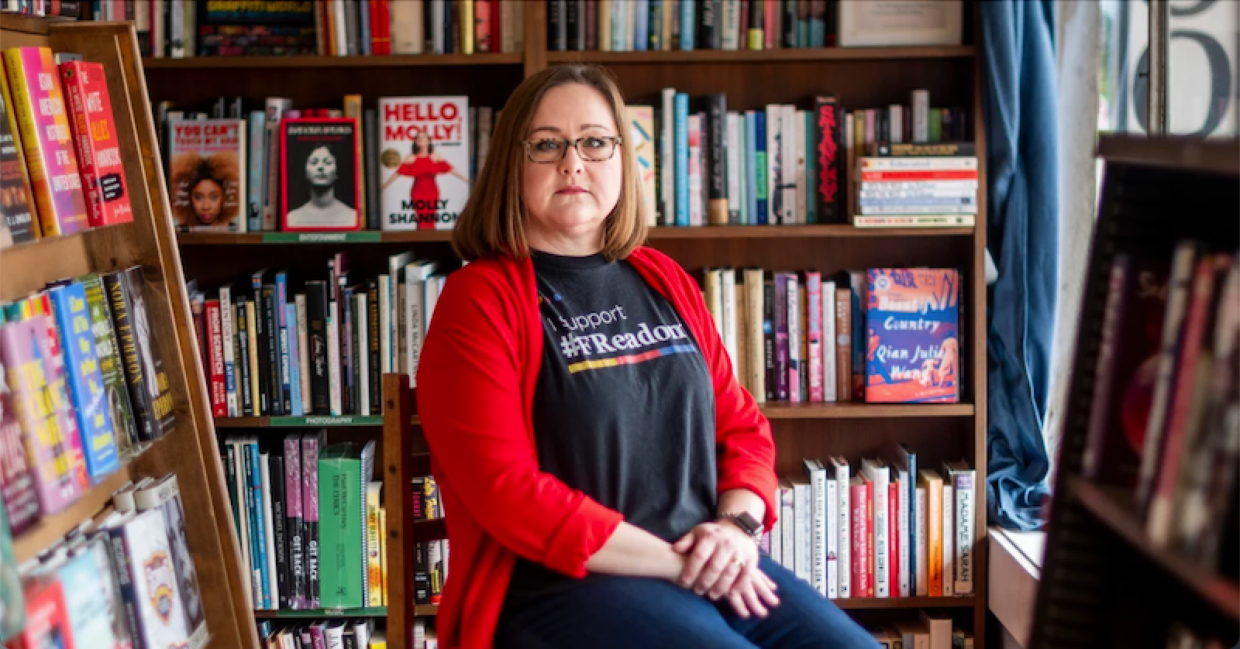 A school librarian is suing the right-wing “activists” who defamed and harassed her.

It’s a grim time for inclusivity, tolerance, and freedom of speech in America, with the nationwide assault on LGBTQ+ books and authors ramping up to levels not seen in years. Some days it’s hard to shake the feeling that the bad guys are winning.

Still, as one courageous Louisiana librarian is demonstrating this week, it’s important to not be cowed.

Amanda Jones, a middle school librarian in Denham Springs, Louisiana, is fighting back against a group of right wing “activists” who have repeatedly harassed and defamed her online.

As James Factora reported in Them yesterday, Jones, an award-winning member of the American Library Association and was Louisiana’s 2020 School Librarian of the Year:

…filed a complaint last Wednesday in Louisiana’s 21st Judicial District Court against the Facebook page “Citizens for a New Louisiana” (CFNL), as well as its operator, Michael Lunsford, and a separate Facebook user, Ryan Thames. The 14-page document details how the defendants repeatedly defamed Jones on its Facebook page, claiming that she is a “criminal and a pedophile—one who supports dissemination of ‘pornographic materials’ to elementary school children.’”

The claims made on the page followed comments by Jones at a July 19 meeting of the Livingston Library Board of Control, which governs the libraries of the Livingston Parish area, near the capital city of Baton Rouge. The meeting was called by board member Erin Sandefur, who asked her colleagues to look into books with “inappropriate” content. That included a list of eight books, including It Feels Good To Be Yourself, a children’s picture book about a trans girl. During the public comment period of the meeting, Jones expressed concerns that book challenges “often target marginalized communities such as BIPOC and the LBGTQ community,” as well as books on sexual health and reproduction.

“All members of our community deserve to be seen, have access to information, and see themselves in our public library collection,” Jones said in remarks reprinted in the complaint. “Censoring and relocating books and displays is harmful to our community, but will be extremely harmful to our most vulnerable—our children.”

The CFNL has repeatedly targeted Jones, not only in social media posts (which reportedly circulated “around social media and across the country for weeks”), but also through public information requests sent to Jones’ employer. Even more worryingly, both defendants have also allegedly published Jones’ place of employment in social media posts and have threatened to show up there.

You wouldn’t blame anybody for giving in and going to ground in the face of such harassment, but Jones is mad as hell, and she’s not going to take it anymore.

Jones is requesting a temporary restraining order that would prohibit the defendants from making any mention of her on social media, contacting her in any way, and coming within 100 yards of her. Additionally, the defendants would have to remove all references to Jones from their social media posts. Jones is also requesting a hearing and a preliminary injunction that would prevent the defendants from harassing her in the meantime. Ultimately, she is hoping for a permanent injunction, compensatory and punitive damages, and the attorney’s fees and other court costs.

“I’ve had enough for everybody,” Jones said in an interview with NBC News. “Nobody stands up to these people. They just say what they want and there are no repercussions and they ruin people’s reputations and there’s no consequences.”