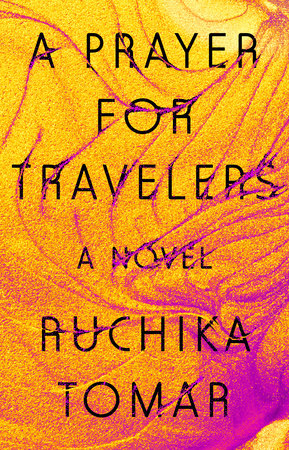 The following is an excerpt from Ruchika Tomar's novel, A Prayer for Travelers. Tomar was raised in Southern California. She studied English literature at the University of California, Irvine, and earned an MFA from Columbia University. A recent Wallace Stegner Fellow, she is currently a Jones Lecturer at Stanford University. A Prayer for Travelers is Tomar's debut novel set in the American West, that follows a woman's dangerous quest across the desert to find her missing friend.

Lamb’s daughter was tall, her hair the color of rosewood. A pale, square chin and a wide mouth, a jagged‑edged mole above the right lip like a scar. She stood on the perimeter of the emergency room in Tehacama where her own mother died twelve years before. She was dressed in dirty jeans and a ratty coat, a baby tied to her chest with a cotton sling.

Later, a hospital janitor pushing a mop bucket of filthy water would say the girl seemed distracted, impatient. She was overheard asking a man in the next seat for the time. The baby cried and the sound was lost amid the wail of an ambulance just pulling up, a cacophony of voices melding English to Spanish, back to English again. The crying stopped and started again, hours passed; nothing matters. When the girl’s name was finally called she walked into a wide adjoining room divided only by paper screens.

Later, when the nurse rolled her cart in, the girl was sitting on the exam table with one leg folded underneath her, the other swinging back and forth. The baby had fallen asleep on her breast. The nurse straightened one of the girl’s pale arms, tracing blue‑green veins like rivers underneath smooth, unbroken skin. The girl didn’t seem like a junkie, at least not in any obvious way. But twenty minutes later the nurse returned to find the baby alone, lying on the exam table’s creased paper, quiet as you please, mouthing an expired driver’s license. The nurse called the police and the police called a second number and several hours later an older man with a long angular face and black hair walked in from the cold. He was unknown to any of the parties involved and showed his identification to the uniforms guarding the child. He had driven three hours just to get there.

No, he told the officers. He had not seen his daughter in many years. He did not know where she was living.

They gave him the child, promising someone would call to follow up. The long‑faced man took me home and built a cradle out of the lodgepole pine he’d been saving to make a desk. When I grew older, he told me I was his granddaughter. He told me my name was Cale.

He had a first name he never liked, last name Lambert. The boys in school called him Lamb, a lark because he was anything but. He was more like a tree grown bent from the earth, weathered and sound. Every day he went to work at Cesar’s ice plant forty miles down the freeway. It began as a high school job: six dollars an hour to catch bags of ice at the bottom of the assembly chute and stack them on pallets for delivery. After three months came a promotion; in another six, he ran the floor.

Did he already know then, that he held the wrong daughter by the hand?

Before Trixie, before Wolf, I was his only shadow. At two, already queerly distinct from the daughter he had lost. Brunette and yellow‑eyed like one of the coydogs they bred on the mountain. In all the important ways, I was of him. I wore his socks, five sizes too large, and drank the dregs of his coffee from the cups left carelessly unattended throughout the house. In the evenings, when he retired to the front room to read the paper, I crawled into his lap to tuck my head under his grizzled chin, comforted by the smell of pine tar soap and Marlboro Reds, the clean, faded scent of laundry detergent on the breast of his checkered shirts.

At three and four and five, I asked for dogs. I had a pathological desire for warm animal bodies to kiss. Does this signify some kind of loss, a lack of attention on the guardian’s part, an absence of love freely given? I don’t know. I wanted to love something and know what it meant to grow it. I wanted to put my love on places and things that didn’t mind. I had gotten to know about farms, where cows and pigs and dogs lived. These were things Pomoc would never have, lives that could never happen. Oh, you might buy a pot‑bellied from the breeder in Nixon, but it’s hard to keep fat things happy in the summer heat.

Our house was simple, one of the few in Pomoc with a second story. The floors had been stripped and remained unfinished; the stairs creaked and the taps ran cold for a long while before growing warm. In the front room stood the old blue couch where Lamb read his paper, the Paiute rug Wolf slept on those nights the temperatures dropped low enough to frost the saltbush. One summer we built bookshelves into the wall from harvested trunks of birch. When the panels had all been fitted together, we stacked our treasure there: Lamb’s collection of dog‑eared textbooks from two years at state college, my own assortment of dime‑store paperbacks like snapshots from phases I’d outgrown—mysteries, romances, slow and sprawling biographies of famously short men.

Lamb’s room, and his daughter’s, was on the second floor, cool in the winter and the early hours of morning. I woke alone in her twin bed across a wide window overlooking the land. The room carried echoes from its previous owner: two black scuffmarks by the closet door where a full‑length mirror hung, delicate pencil marks on the doorjamb where she grew taller and taller, until she stopped growing and had me. I lay in bed for hours imagining the million cruel ways she moved about the room, the smell of her hair as she stepped out of the white‑tiled bath, even the shape and feel of her hands.

Across the hall, Lamb’s bedroom had been modified for a widower. He kept the dresser polished to show a thick, wide scar in the wood and a black‑and‑white portrait of Catherine with her short, dark curls pinned up. The glass plate that held her jewelry had been packed and stowed, along with all her blouses and coats. In the attic were boxes of photo albums: the fresh‑faced couple with dusty shoes, clasping hands in front of Pyramid Lake; the newborn baby swaddled in cloth; a wide‑eyed toddler slick and gleaming in a tub. Later photographs showed a surly, cinnamon‑haired daughter in corduroy trousers, clinging to Lamb in a dry field. I studied these photos to gauge Lamb’s  happiness and compare it with our own. Did he already know then, that he held the wrong daughter by the hand? Had the largest, most generous part of him always been waiting for me?

If family is nothing but the accumulation of routine among two or more people, here was ours: Lamb cut the thick pine table in the center of the kitchen himself, along with four spindle back chairs to match. We sat in the same pair every meal, though the others were hardly occupied. It was the only time he showed blatant affection to the dogs, dropping a piece of meat into each of their bowls, rubbing a grateful furry head.

After Lamb retired for the night, I stayed up washing our dishes in the sink, the kitchen window facing our rocky yard, the grade of pebbled soil and milkweed rising gradually into mountain. I lingered over the soapy plates and glasses, waiting for coyotes to emerge along the back ridge. They scavenged for small dogs, an unlucky cat, their bright eyes bobbing as they ran. The way they paced the fences, raising their snouts to howl.

What the Beginning of an Ebola Outbreak Looks Like 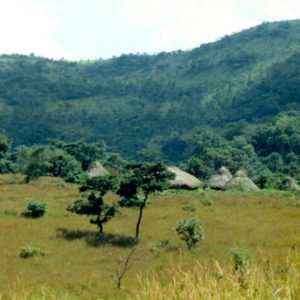 What the Beginning of an Ebola Outbreak Looks Like Thursday, April 10 Menindor’s funeral was held two days after she died, in Kpondu Village, Sierra Leone. At least two hundred...
© LitHub
Back to top