Once Upon a Time in Japan, at the Foot of the Bed…

The following appears in the debut issue of  Freeman’s, which is out now.

In 1996, I was living alone on the ground floor of a musty old house at the edge of a Japanese town called Kabe in Hiroshima Prefecture. Kabe is built where the Ōtagawa River emerges from the mountains and enters the delta plain over which Hiroshima and its suburbs nowadays sprawl. In 1945 an American Boeing B-29 dropped an atomic bomb (famously named “Little Boy”) onto the city. Uncounted hundreds or thousands of people not incinerated in the blast made their way north along the Ōtagawa in the vain hope of finding help. Many died of their burns before they reached Kabe, and many died of radiation poisoning in the days and weeks that followed. The precise number of total casualties as a result of the bomb is impossible to reckon, but estimates range from 90,000 to 166,000, with about half the deaths—45,000 to 83,000—occurring on the first day. By any measure, this is a hellish quantity of sudden death. In the Japanese context, this also means a vast number of restless ghosts denied the Buddhist funerary rites required for a smooth passage to the next world.

The house I lived in stood at the edge of a small rice field on the banks of a shallow, stony, water-noisy tributary of the Ōtagawa. This peaceful spot was one of the nicest locations I’ve ever lived in, and thanks to the river it was cool even in the hammeringly hot Japanese August. Being young, I felt that I owned an unlimited bank account of hours and days, so I’d often zone out and gaze at the river, its herons, and the steep flank of wooded mountain rising from its far bank. No great leap of the imagination was required to picture the irradiated human beings of all ages arriving 50 years earlier—right there, at the very same spot where I aired my futon, hung my laundry, and ate my granola. (I found that when I lived in or near Hiroshima, I couldn’t not think about the A-bomb, daily.) Maybe these imaginings were a factor in what follows, or maybe “my” section of the river was what Irish mystics call “Thin Places,” where the screen between this world and an eternal one is thin, less a wall and more a membrane. I didn’t know then and I don’t know now.

I slept in the back room, divided from my living/eating/writing room by sliding fusuma screens, this being a common arrangement in Japanese houses. My house was set back some distance from the main Hiroshima-Mihara road, so no light from street lamps or neon signage fell on my bedroom window. The nocturnal darkness, then, was close to total. One night in early October I woke up feeling four linked certainties: first, that a ghost was standing at the end of my bed; second, that it really was a ghost and not a burglar, because my front door was locked and made a juddery racket when it was slid open; third, that the ghost was male and much older than my 27 years; and fourth, that he didn’t want me to look at him.

I didn’t feel that I would be turned to salt if I did look, but I did feel that it was strongly advisable not to. I was scared by my visitor in a way I hadn’t been scared before, and haven’t been scared since. It wasn’t the calculating “What do I do to get out of this?” fear of a near-mugging experience I once had at the Tottenham Court Road Tube station; not the fight-or-flight “F*%+ing Hell!” shock-fear I get if a mad-eyed dog’s suddenly barking in my face; and not the helpless terror I’d felt for a few seconds one time flying out of Florence when the airplane seemed to lose power. My fear that night in Kabe was more like an ongoing, low-level electrical shock, and if it resided in any organ it was my skin. I was able to analyze my situation, and my first thought was that the presence in my room was a trick of my mind or a leftover from a dream. I tested the theory by waiting a minute, until I knew I had to be properly awake. My sense of being watched didn’t subside. I didn’t sense any anger or malice in the presence: It was more a robust curiosity about what this pale lanky foreigner was doing in his house.

The logical thing to do in the circumstances was to explain myself. So I told my visitor my name, my birthplace, my age, my job, how long I’d be there, all with my eyes shut, and all in my clunky Japanese—why would a ghost in Hiroshima speak English? I wound up my self-introduction with the same “Yoroshiku onegaishimasu” you’d use when begging a favor or acceptance from a human agency. Maybe a minute passed, and I felt a new certainty that my visitor had gone, reasonably satisfied with the new tenant’s account of himself. So, I switched on my lamp, checked that the front door was still locked—it was—and slid back into my futon. The adrenaline in my blood faded away, and I slept until my alarm clock told me it was time to get up and go and teach three classes of 30 to 40 Japanese non-ectoplasmic junior high school boys.

And that’s the end. It’s hardly “Oh, Whistle, and I’ll Come to You, My Lad” or “The Monkey’s Paw,” I know: There were no unexplained footprints in the dust there the next day, nor did my upstairs neighbors ever mention that a man had once hanged himself in my back room. Nonetheless, that night is the closest I have to a real-life ghost story, and turned a ghost-disbeliever into a ghost-agnostic, at least. I half-hoped that I’d get another nocturnal visit before I left the musty old house in Kabe and moved into a newish apartment in the city, but it seems that for him, one encounter with the transient was ample.

David Mitchell has written six novels, two of which were shortlisted for the Booker Prize. His latest book, Slade House, is forthcoming from Random House. 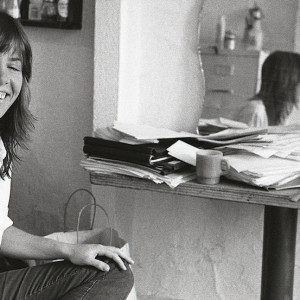 Eileen Myles has lived in her East Village apartment, where this interview took place, since 1977, and yet, entering her studio,...
© LitHub
Back to top