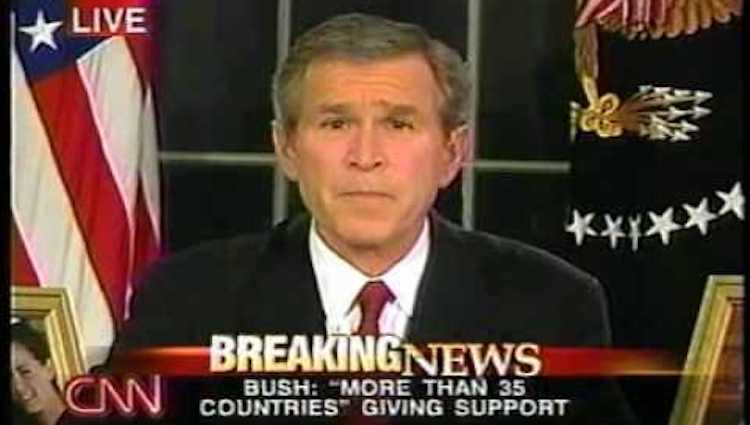 Like most of us now over the age of 30, I watched the news of 9/11 on TV. In the kitchen of my house in Salt Lake City, I nursed my four-week-old son as the TV cameras cut from Matt Lauer and Katie Couric in their Midtown studio to that longshot of the thick gray plume of smoke billowing from lower Manhattan into the clear blue morning sky. I had left New York for Utah three years earlier, and that skyline still meant home to me. My husband said, “The world will never be the same.”

When President Bush addressed Congress nine days later and called for war, he spoke the words the country wanted to hear. “Enemies of freedom committed an act of war against our country,” he proclaimed. “Our war on terror… will not end until every terrorist group of global reach has been found, stopped, and defeated.” Applause filled the chamber. The clapping representatives looked determined, grim. Islamic terrorists, Bush continued, were the heirs to “all the murderous ideologies of the 20th century… fascism, Nazism, and totalitarianism.” He waved his arms. “Freedom and fear are at war. The advance of human freedom, the great achievement of our time and the great hope of every time, now depends on us.” These were the words of a new era: radical Islam, war on terror, Axis of Evil, weapons of mass destruction. These were the names: al Qaeda, the Taliban, Osama bin Laden, Saddam Hussein. Outside every house along our street, American flags flapped in the breeze.

In 2001, the internet was young and for me, blogs were a cool new thing. I came across a quirky one called “Little Green Footballs,” run by a jazz-guitarist-turned-computer-geek named Charles Johnson. Johnson posted links to articles on radical Islam and called out anti-American and anti-Semitic rhetoric in the European and Middle Eastern press. He posted funny and horrifying photographs, skewered the liberal left with amusing epithets like “freakazoid” and “idiotarian,” and unequivocally came to Israel’s defense. Half my family lives in Israel. America had just suffered one terrorist attack; at that time of the second intifada, Israelis were suffering terrorist attacks nearly every week. They were, it seemed, on the front lines of the jihadist threat in the Middle East. I started clicking on LGF, as the blog is known, on a regular basis—first out of curiosity, then in growing agreement with the points of view expressed. My husband became a fan as well. Walking to the playground with our kids, over the dinner table, we rehearsed the arguments for the need to fight global jihadism, in favor of the War on Terror, which, in that moment at least, seemed to make a necessary, awful sense.

As friends in other parts of the country rallied to protest the war, I found myself, for the first time, on the conservative side of the foreign policy debate. When Johnson posted news stories of violent attacks on Jews in Europe, or photographs of Palestinian toddlers dressed up as Hamas terrorists, I felt as if a window had been opened onto a reality I’d never before seen. Although I was the grandchild of Jews who fled Nazi Europe in 1939, and the daughter of an Israeli, I’d grown up assuming that anti-Semitic hatred was more or less an artifact of the past. In that moment of national vulnerability and fear (remember: the anthrax attacks, the shoe bomber scare, the color-coded terrorism alerts), I saw that it was real.

As time went on, of course, the lens shifted. The weapons of mass destruction were revealed to be a lie. The war bogged down in the killing fields of Fallujah, the deadly streets of Baghdad, torture chambers of Guantanamo and Abu Ghraib. The costs were appalling: hundreds of thousands dead, trillions of dollars spent, millions of refugees. By the 2004 presidential campaign, I’d lost interest in LGF and grown disgusted with the neo-cons and Bush. By 2010, Charles Johnson had become fed up as well. In what now seems like a prophetic blog post entitled “Why I Parted Ways with the Right,” Johnson denounced what he called “the racism, hate speech, and bizarre conspiracy theories” that increasingly characterized public discourse on the right, along with the “anti-Islamic bigotry that goes far beyond simply criticizing radical Islam, into support for fascism, violence, and genocide.” He blocked right-wing bloggers from his site and deleted many of his earlier posts. He wrote: “The American right wing has gone off the rails, into the bushes, and off the cliff. I won’t be going over the cliff with them.”

I’d steered clear of the cliff, but as a writer, I remained fascinated by the emotional climate of those first post-9/11 years. I was bothered most of all by the question of what could happen when liberal—that is to say, humanist—values were overwhelmed by emotions of vulnerability and fear. I was troubled by a new awareness of how communities are defined by borders—how identity itself depends, in so many complicated and unconscious ways, on the existence of an Other overdetermined by fear and hate. I wanted to understand how what Ta-Nehisi Coates has called “the Dream”—and every immigrant’s Dream of freedom and reinvention in a new and better place—carries within it the seeds of its betrayal, rooted in violence and hate.

I began to write a novel, Underground Fugue, centered on the image of a semidetached London townhouse, one half belonging to an elderly Jewish woman and her American daughter, the other to an Iranian doctor and his teenage son. All four characters were displaced by conflict, both attempting to flee and seeking reconnection with the past. Like a musical fugue, the four voices intertwined. The American woman, Esther, was a liberal: critical of the War on Terror, ambivalent towards Israel, and far more open-minded than her mother and her generation of post-war Jews. The Iranian doctor was attractive; a tentative relationship ensued. This was London in 2005, the summer of the 7/7 terrorist bombings on the Tube. What would happen, I wondered, if Esther came to suspect the doctor’s son next door of being an Islamic radical? What would she do?

I wanted to believe that love trumps hate.

I tried—I really did. But I should have known that if even an intelligent and well-intentioned liberal like my character Esther could mistake guesswork and suspicion for the truth—could be so blind to racial profiling’s seductive lie—then the rest of the world could as well. After all, I knew firsthand how easy it was to feel self-righteously defensive, to justify violence based on trumped-up insecurity and rhetoric-stoked fear. And even as I was writing the novel’s final scenes, Americans were cheering wildly for a demagogue who vowed to build a wall along our southern border and to kick the Muslims out.

I certainly had no idea, when I started writing, that an American Presidential candidate would stoke to such an extent the racism and bigotry and hate speech that I hadn’t believed existed in our society beyond a lunatic fringe. Other writers—Philip Roth in The Plot Against America, for one—foresaw this possibility far more clearly than I did. In my novel, the failure to reach across the boundaries of history and race plays out on an individual, not national, stage. Love and betrayal go hand in hand. The attempt to connect across difference holds out the potential for joy and beauty, but ends in loss and grief.

In my novel, Esther has a son who dies in an accident at the age of 15. My own son, a four-week-old infant on that world-changing September day, is now 15 as well. When I started writing the novel, 15 seemed very far away, but now it’s here, and superstitiously, I feel afraid. Only children believe, of course, that imagining a thing will make it come true. My friend, a psychoanalyst, suggests that imagining such a story is in fact a way of taming, or coming to terms with, one’s greatest fear. I wonder now if the same can be said for my novel’s broader themes as well. Maybe imagining how we each might, despite our best intentions, be blinded by the racist illusions of the Dream, is what we need to do if we’re to resist the political challenges that lie ahead. As a writer, I hope that is the power of fiction. I hope that can help us tame the fear and hatred, and find our way, through empathy, toward a deeper truth.

Margot Singer won the Flannery O’Connor Award for Short Fiction, the Reform Judaism Prize for Jewish Fiction, the Glasgow Prize for Emerging Writers, and a PEN/Hemingway Honorable Mention for her story collection, The Pale of Settlement. Her work has been featured on NPR and in the Kenyon Review, the Gettysburg Review, AGNI, and Conjunctions, among other publications. She is professor of English at Denison University in Granville, Ohio. Underground Fugue is her first novel. 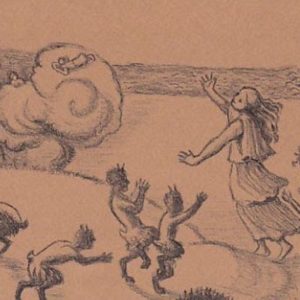 It is entirely possible that I have never had an accurate sense of what is called realism in that I do not, as a reader,...
© LitHub
Back to top