A Poet’s Case for Wasting Time

Kayo Chingonyi on Setting Aside the Imperatives of Late Capitalism

One of the lesser-known songs in the extensive corpus of Yasiin Bey (FKA Mos Def) is a masterpiece produced by DJ Honda entitled “Travellin’ Man.” While fans of the song might be limited to devotees of hip hop’s golden age, its sentiments tap into a central issue of late capitalism: the pressure of having always to be “on the job”; to be, in other words, caught up in the creation or acquisition of capital (and here we might also consider “content” a kind of “intellectual capital”). In the song, the speaker laments the ephemerality of life as an itinerant musician, as did the speakers of “Wherever I Lay My Hat (That’s My Home)” decades before and “You Got Me” released a year after “Travellin’ Man” in 1999. In the past few years, I’ve begun to understand why itinerant life is such a perennial theme for writers, artists, and musicians alike.

When I started actively participating in literary culture, I was 16. My writing world was comparatively small, comprising perhaps three or four open mic events I attended regularly. I cut my teeth at these events and over time, as is common for those who stick at it for long enough, I moved from short open mic slots or floor spots to longer sets. The hierarchical dynamics of this process seemed clear even then. The ideal was to be among the headliners who performed longer sets, to be booked as regularly as possible and, in so doing, make a name for oneself as a writer.

Then, as now, the idea of being busy was synonymous with success because, under capitalism, activities only have worth as a function of the income they generate. As if to illustrate this, those outside the poetry bubble often responded to me talking about what I was doing by saying, “But are you being paid?” Though this was often framed as concern, the question reaffirmed the notion that I should be applying capitalist measures of success to my practice as a poet.

I was encouraged to draw inspiration from a capitalist ideal of the writer: someone who works themselves into the ground, neglecting their health and wellbeing in the service of creative success. Those, I was told, are the truest artists, the ones most committed to their art. For years I took this sentiment to heart, said yes to everything, and found myself vacillating between a busyness that allowed little time for anything outside work and a paralyzing fear of not working only cured by more work. Part of it had to do with living as a freelance writer in a city as expensive as London but another part of it, I realize now, was in my increasing lack of connection to the place I lived as anything more than a base—somewhere to recuperate before the next professional engagement. At one point I was traveling so often to different cities in the UK that I started referring to myself as living a train-set lifestyle (such was my intimacy with London’s rail termini).

With few exceptions, the moments I was happiest in London were when I managed to shake this pressure off and connect with the city as a living organism rather than as a workplace. I think of a long walk for a friend’s birthday, meeting friends on Wanstead Flats on the first sunny day in ages, playing one-on-one basketball games until it got dark in Goodmayes Park. What is common among all these experiences is that each of them occurred in a small locale rather than the city-hopping context which paid my rent and left me thinly spread.

I found that I started to take pleasure in what I might previously have considered wasted time.

In his book Song of the Earth, the scholar and literary biographer Jonathan Bate suggests that even though it has the capacity to “effect an imaginative reunification of mind and nature” (because it can make us feel as well as describing the world around us) poetry can sometimes mark the separation human beings experience from their surroundings. One of the reasons for this, Bate contends, is that the mind, rather than the world, has become the principal site of artistic inquiry. In this formulation, the places in a poem can become reduced to mere backdrops, “bases” from which speaker draws cerebral connections.

Looking through my old notebooks, I can trace this tendency in my own my writing. The earliest poems I can find are extensions of classroom exercises in which I was instructed by a teacher to write “about” something, a physical object or place in the world. These poems, though terrible, are striking because I wrote them at a stage when my interiority was not so developed, when I didn’t see myself as separate from the external world in the ways I do now. Among these papers is a poem in which I imagine the nocturnal lives of animals as they plan the overthrow of their human overlords. Elsewhere in my archive are poems in which trees and leaves speak as well as poems written from memories of my earliest life in Zambia, a landscape from which I was not so far removed back then. Reading these pieces, my overwhelming feeling is that the formative impulse to commune with the world is the important thread connecting this early work.

This cerebral bend might not have been a problem had it not developed in tandem with an unhealthy working life, which took a toll not just on my health but also on my relationship to the world. In privileging the capitalist imperative, the most important consideration became business efficiency. What did it matter if I had to appear at a festival in Cheltenham the day before a set of school workshops in Stirling, a city hundreds of miles away? If there was a way to make the journey I would do it, no matter how long or uncomfortable, no matter the environmental considerations. If the journey by train would take too long, I could always fly. And so it is with so many of our choices under the duress of market forces; they cease to be intentional and instead arise out of a fear of saying no, of being unavailable for work, of not being busy.

In 2016, having worked myself to burnout one time too many, I snapped and forced myself to take time off. That summer I went to Los Angeles and New York to visit family, eat, buy vinyl, and walk around. The following January, I traveled back to Zambia for the first time in almost 25 years. I put a month aside for the trip to Zed, cancelling all work and really trying to be present there. For the first time, I was choosing to fly in order to interact with a different community, thinking of it as a living thing. The flights had a purpose beyond getting me somewhere so that I could fulfill a contractual obligation and leave again before looking up at the sky in daylight. Waking up in these new environments without the usual pressures, I found that I started to take pleasure in what I might previously have considered wasted time. I committed myself to the practice of exploring new places for no other reason than that doing so might be its own joy.

I need only walk for 15 minutes or so and in that space, I will likely discover something. I just have to be looking and listening.

In Trinidad and Tobago, they call this kind of unstructured social time “liming.” It is not so rarefied a thing, and is an important aspect of the wider culture rather than being connected to any particular social group. The idea is that there is no specific purpose to the gathering, and it is this part of liming that appeals to me. In a lifestyle that is focused on maximizing economic capital it is refreshing and revolutionary to gather socially. Putting aside the capitalist imperative leaves space for staring into space, an act which stands in for the kind of elusive freedom we have been taught that money can buy.

Though I’m yet to enact all of the changes I would like to in order to be in the world with a deeper sense of responsibility to my surroundings, I have started to say no more often when asked to leave my locale. This is not because I am not grateful for the opportunity and ability to travel, but rather because I can put this travel in perspective. If I say no, that does not mean that I am sabotaging my career or that I will never be asked again. And, while there are opportunities to experience new things when I travel large distances, these moments of discovery are closer at hand, too.

I marveled recently at the panoply of languages spoken at an international poetry festival to which I was invited, where multilingualism was understood as a given. These kinds of trips find me at my best, but I don’t necessarily have to board a plane to hear the poetry in a word I have never heard before. I need only walk for 15 minutes or so and in that space, I will likely discover something. I just have to be looking and listening.

Kayo Chingonyi's latest book, Kumukanda (Chatto & Windus, 2017) was a Guardian and Telegraph book of the year and won the Dylan Thomas Prize and a Somerset Maugham Award. Kayo was a Burgess Fellow at the Centre for New Writing, University of Manchester, and an Associate Poet at The Institute of Contemporary Arts, London. He has performed his work at festivals and events around the world, is Poetry Editor for The White Review, and an Assistant Professor of Creative Writing at Durham University. 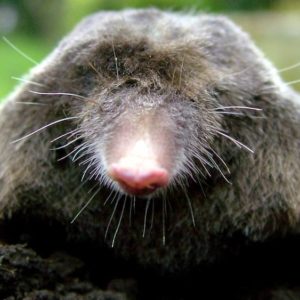 Molecatchers produce advertising flyers and build websites. They tell you that moles on airstrips can cause serious problems...
© LitHub
Back to top