A Poetic Structure Built on Many Voices: Talking to Matthew Daddona

Joannie Stangeland Speaks to the Author of House of Sound

Daddona’s fiction, poetry, and nonfiction have appeared in Outside, Fast Company, UPROXX, Amtrak’s The National, Guernica, Tin House, Slice Magazine, The Southampton Review, The Rumpus, Grammy.com, and other outlets. Daddona is also the recipient of an Academy of American Poets prize. Alongside two other multi-hyphenates, he co-hosts Kill Genre, a quarterly reading series in Manhattan’s Greenwich Village.

Joannie Stangeland: Throughout House of Sound, themes flow—sound, but also family, love, connection, and the difficulty in connection, the shortcomings of language. Can you talk about how these poems came to be and how they came to be in conversation with each other?

Matthew Daddona: Thank you for reading the collection, first off, and for picking up on the theme of the shortcoming of language. That was an intention of mine, so I’m glad I succeeded, insofar as I’m not the only one who recognized it. It was Joy Williams, the great fiction writer, who said, “Much of a writer’s work is to unexpress the expressible as well as the opposite,” but I carry that lesson into writing poetry as well. To unexpress the expressible in poetry is, essentially, to mystify and confuse the logic of language.

What do I mean by that? That’s sort of a lofty way of saying that I like to bend narratives, not as a means to confuse the reader but to keep them guessing. To create tension. To unseat them, but situationally and with purpose. That’s where characters come in, I believe. Because a poem should always have a center. I’m sure other poets will disagree with me—and my poems may be more narrative than some—but I think that even the most experimental of poems (language poems, for example) should have some center on which to rest effusiveness.

That center, at least in this collection, rests on various characters and their relationships to one another. At many times, what the characters are trying to express to one another is love, the idea of protection of the fleeting sense of it, the cloying sense that the outside world is too noisy, too large to drown out.

“The notion of multiple voices interceding each other challenges the expectations of a poem.”

I first got interested in this idea of verbal shortcomings in the work of William Carlos Williams, whom I studied in college, and in the maximalism of Charles Olson. Both are very similar, and yet different, from one another. And sometimes I find myself favoring the simplicity of Williams more than the maximalism of Olson. But Williams had a grandiosity, too. Many people forget that.

Paterson is a character as much as it is a tribute to a place. And I’ve always been interested in how poets’ forms and structures evolve over time. Although in House of Sound I didn’t set out to bookend the collection with bigger, more formal poems, the collection does employ this strategy. And I liked how that formalism, that maximalism, is responded to by smaller, more “modern,” free flowing poems. That call-and-response was as interesting to me as I hope it was to the reader.

JS: The poems in House of Sound contain a wonderful breadth of tone and shape—from the expansiveness of “Recovering Spanish Teacher” to the taut, stunning compression of “A Lesson.” There are also structural explorations, including the sections in “Poem for Leaving (For KB)” and “Poem for Returning (For KB),” the numbered list in “Vertices,” and the two columns of “Chute.” How do you approach finding the form for a poem, or how does the form find you?

MD: Playing with form is one of the most rewarding parts of poetry. I think I often decide on a form before I begin writing (“I’m going to write this one in tercets, or this one in couplets,” I’ll say), but the beauty of poetry is that these forms can be ripped and split open at any time. Literally. Poetry is more like modern dance than it is any other art; you can break so many rules and couch subversion in language.

JS: In some poems, House of Sound becomes a photo album, creating a vivid community that includes the recovering Spanish teacher, KB, Em, and, especially, the speaker’s mother and father. Can you talk about how they inhabit the title poem?

MD: Polyphony is something else I strive for in my poetry and fiction. The notion of multiple voices interceding each other challenges the expectations of a poem. It’s also, well, fun. This poem might be the most personal of the collection, and it’s no coincidence that the collection begins with it. I remember being younger and waking up and hearing my father getting ready for work as early as 4:30 or 5:00 AM, and I imagined that the early morning, as he inhabited it, was a separate world, a more benign and secretive one.

And then I thought about how he couldn’t enjoy that world because it was always in service of getting ready for his job. I don’t mean to sound cryptic or like a sad sack. Maybe he enjoyed that early morning, and it was I who was looking for a darker way to see it. But then I thought about all of the repeated actions we do every day without thinking: the pouring of coffee, the snapping of buttons on our shirts, doing the dishes. I realized that my mother’s and father’s actions were my actions, were their actions, were all of ours.

JS: Many of the poems have a dreamlike quality, but “A Friend in Nogent-Sur-Seine Is the Next Best Thing” also has mystery. Can you tell us more about this poem?

MD: I wrote this poem for a friend, the same friend I wrote “Poem for Leaving” and “Poem for Returning” about, though this one was written in between those two. It was inspired by a dream she told me about driving her car into a river in France. “Poem for Leaving” was inspired by her saying she had the feeling she was thousands of miles away and had left her oven on. I wrote that poem in ten minutes and only edited the end. That was the first and only time that has ever happened; but there was something so natural about the writing of that poem at the time.

“When I’m writing fiction, there’s a part of me that wants to ditch the formalism of scene-setting and characterization and dialogue and allow the words to unfurl into poetry.”

She had a lot of good lines that I shamelessly stole. In “A Friend in Nogent-Sur-Seine,” I wanted to pair a tragedy (the crashing of a car) with the stilted silence that comes after—the “tree bark’s dust,” the “one silent cardinal.” But I have a habit of making tragedy out of nothing. The dream my friend told me about was, in my memory, more comical than it was sad. I think I struggle with writing comical poems.

JS: How does your fiction and nonfiction writing inform your poetry and, specifically, any of the poems in House of Sound? And, as an editor, how do you cajole or silence your inner editor?

This is embarrassing to admit, I realize. But it’s the truth. I read a lot of poetry during the novel-writing—it sort of silenced my fiction-brain and offered a reprieve—but the writing of it was very difficult. I’m sure other writers can go in and out of styles and mediums like changing clothes, and perhaps I’ll get better at this one day. Didn’t someone say that fiction writers are failed poets and poets are failed fiction writers? Maybe I heard that somewhere or I made it up?

Either way, there’s a part of it that I find appealing. When I’m writing fiction, there’s a part of me that wants to ditch the formalism of scene-setting and characterization and dialogue and allow the words to unfurl into poetry, and perhaps, sometimes, they can. But the editor in me (I edit nonfiction for a living) also reminds me that the forms exist for a reason. There are parameters in the marketplace, whether or not we want to acknowledge them. I think owing to these parameters can make you a better writer, a more conscious one. It has helped me at the very least.

Still, when I write I’m a writer before anything else. Which means I need an editor to show me my faults or to challenge me. When I edit, I often introduce vistas to writers rather than tell them what to do. “Look at this over here, this is an area that can be better explored. Look at it. Isn’t it beautiful? Don’t turn away.”

JS: Finally, what’s it like to write a poem in the voice of your mother and then show her the poem?

MD: My mom is a photographer and a great visual artist but is also the first person to say that she “doesn’t understand poetry.” I think she’s lying. Or she doesn’t want the attention of having a poem written about her. I don’t blame her. When she tries to take a photograph of me, I tell her “I don’t like photographs.” There’s a burden to sharing in and indulging in art. 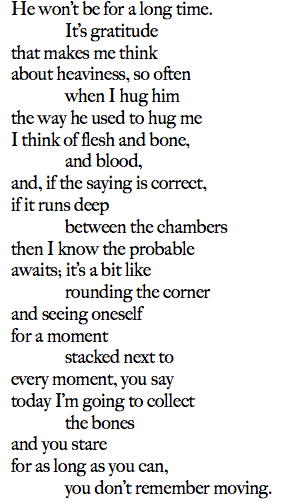 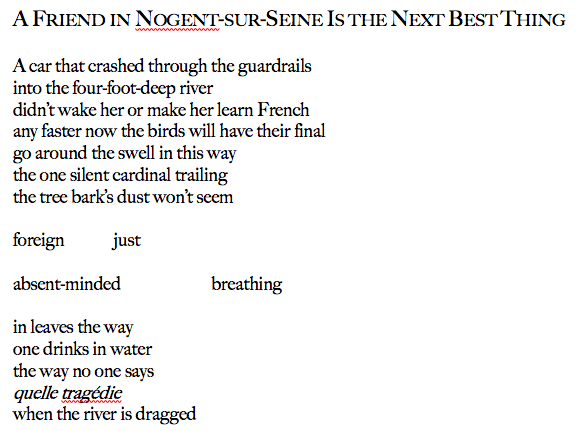 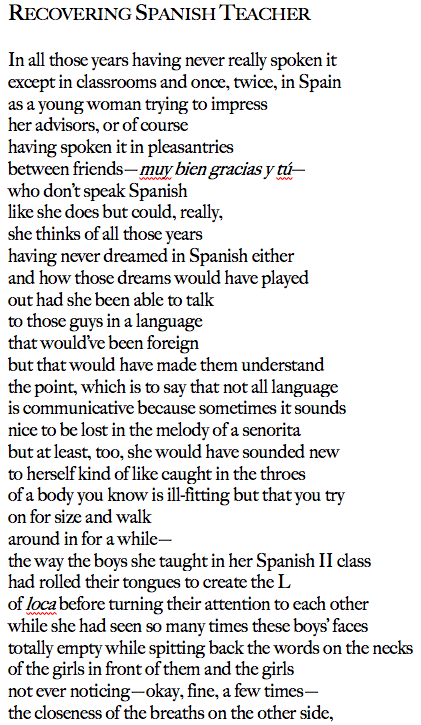 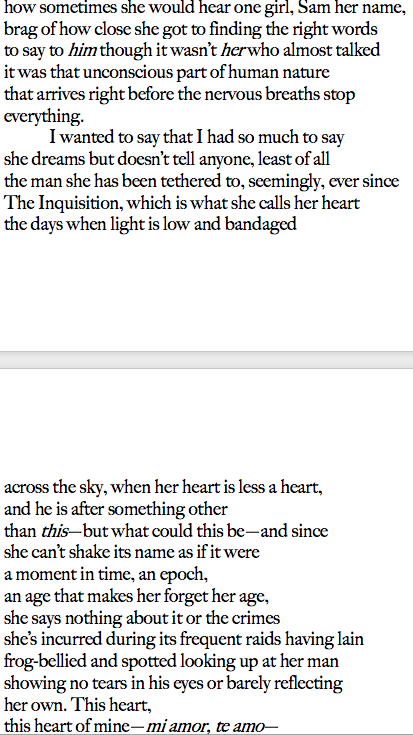 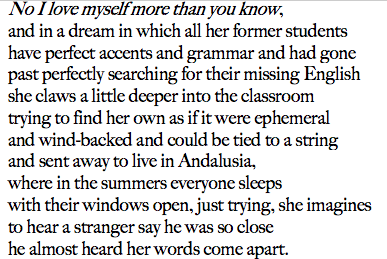 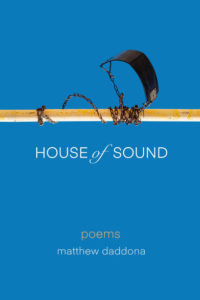 Joannie Stangeland is the author of several collections, most recently The Scene You See. She received the 2019 Crosswinds Poetry Journal grand prize, and her poems have also appeared in New England Review, Boulevard, Prairie Schooner, The Southern Review, and other journals. Joannie holds an MFA from the Rainier Writing Workshop. https://joanniestangeland.com/

The Midnight Library by Matt Haig, Read by Carey Mulligan 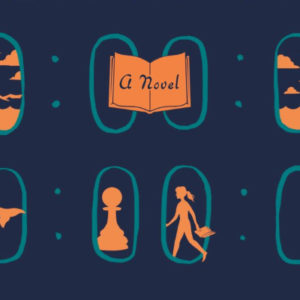 The Midnight Library by Matt Haig, Read by Carey Mulligan Every Monday through Friday, AudioFile’s editors recommend the best in audiobook listening. We keep our daily episodes...
© LitHub
Back to top
Loading Comments...