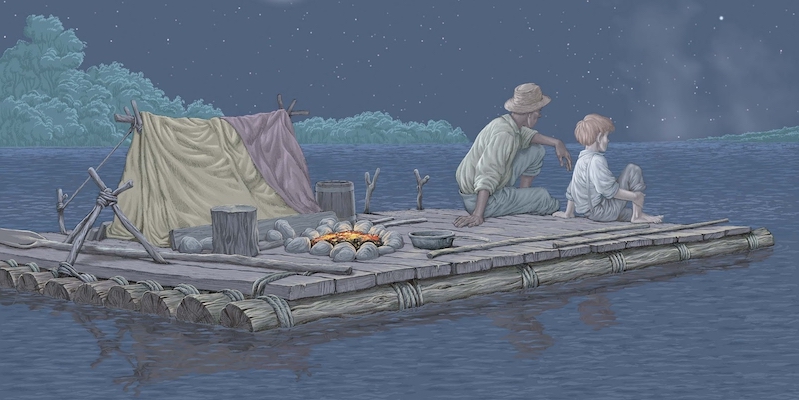 “A Piece of Careless Hackwork.” Read the First Reviews of Mark Twain’s Adventures of Huckleberry Finn

Not, Apparently, an Instant Classic

The whom Faulkner called “the father of American literature” was born Samuel Langhorne Clemmons 186 years ago today in the (currently uninhabited) village of Florida, Missouri, as Halley’s Comet blazed across the night sky.

To mark the occasion, let’s take a look back at the very first reviews of Adventures of Huckleberry Finn, Twain’s iconic American picaresque in which a puckish young boy and a runaway slave make a long and frequently interrupted voyage down the Mississippi River on a raft, encountering all manner of memorable characters along the way. 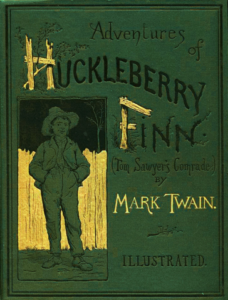 “The Adventures of Huckleberry Finn must be pronounced the most amusing book Mark Twain has written for years. It is a more minute and faithful picture of Southwestern manners and customs fifty years ago than was Life on the Mississippi, while in regard to the dialect it surpasses any of the author’s previous stories in the command of the half-dozen species of patois which passed for the English language in old Missouri. Mark Twain may be called the Edison of our literature. There is no limit to his inventive genius, and the best proof of its range and originality is found in this book, in which the reader’s interest is so strongly enlisted in the fortunes of two boys and a runaway negro that he follows their adventures with keen curiosity, although his common sense tells him that the incidents are as absurd and fantastic in many ways as the Arabian Nights. Here is where the genius and the human nature of the author come in. Nothing else can explain such a tour de force as this, in which the most unlikely materials are transmuted into a work of literary art.” 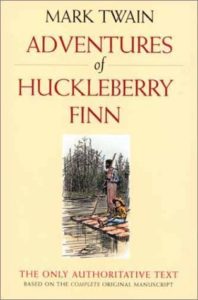 “Were Mark Twain’s reputation as a humorist less well founded and established, we might say that this cheap and pernicious stuff is conclusive evidence that its author has no claim to be ranked with Artemus Ward, Sydney Smith, Dean Swift, John Hay, or any other recognized humorist above the grade of the author of that outrageous fiction, Peck’s Bad Boy. Huckleberry Finn is the story (told by himself) of a wretchedly low, vulgar, sneaking and lying Southern country boy or forty years ago. He runs away from a drunken father in company with a runaway negro. They are joined by a couple of rascally impostors, and the Munchausenlike ‘adventures’ that fill the work are encountered in the course of a raft voyage down the Mississippi. The humor of the work, if it can be called such, depends almost wholly on the scrapes into which the quartet are led by the rascality of the impostors, ‘Huck’s’ lying, the negro’s superstition and fear and on the irreverence which makes parents, guardians and people who are at all good and proper ridiculous. That such stuff should be considered humor is more than a pity. Even the author objects to it being considered literature. But what can be said of a man of Mr. Clemens’s wit, ability and position deliberately imposing upon an unoffending public a piece of careless hackwork in which a few good things are dropped amid a mass of rubbish, and concerning which he finds it necessary to give notice that ‘persons attempting to find a motive in this narrative will be prosecuted; persons attempting to find a moral in it will be banished; persons attempting to find a plot in it will be shot’?” 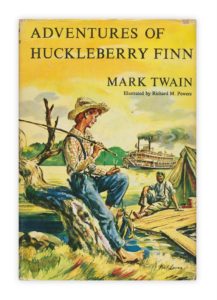 “It is difficult to believe that the critics who have condemned the book as coarse, vulgar and inartistic can have read it. Taken in connection with The Prince and the Pauper, it marks a clear and distinct advance in Mr. Clemens’s literary methods. It presents an almost artistically perfect picture of the life and character in the southwest, and it will be equally valuable to the historian and to the student of sociology. Its humor, which is genuine and never-failing, is relieved by little pathetic touches here and there that vouch for its literary value.

It is the story of a half illiterate, high-spirited boy whose adventures are related by himself. The art with which this conception is dealt with is perfect in all its details. The boy’s point of view is never for a moment lost sight of, and the moral of the whole is that this half illiterate boy can be made to present, with perfect consistency, not only the characters of the people whom he meets, but an accurate picture of their social life. From the artistic point of view, there is not a coarse nor vulgar suggestion from the beginning to the end of the book. Whatever is coarse and crude is in the life that is pictured, and the picture is perfect. It may be said that the humor is sometimes excessive, but it is genuine humor—and the moral of the book, though it is not scrawled across every page, teaches the necessity of manliness and self-sacrifice.” 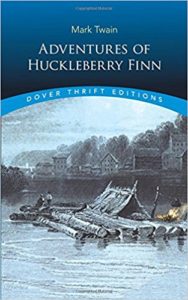 “Mark Twain’s Adventures of Huckleberry Finn had a certain relishable flavor when mixed up with the miscellaneous assortment of magazine literature; but in a book form, and covering more than 350 pages, they are wearisome and labored. It would be about as easy to read through a jest book, as to keep up one’s interest in the monotonous humor and the dialectic variations of ‘Huck Finn’s’ narrative. Here and there are patches of Mark Twain’s best work, which could be read over and over again, and yet bring each time an outburst of laugher; but one cannot have the book long in his hands without being tempted to regret that the author should so often have laid himself open to the charge of coarseness and bad taste.”

From Construction to Teaching: Seven Writers On Their Day Jobs 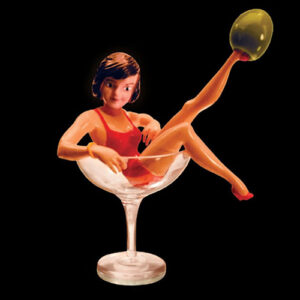