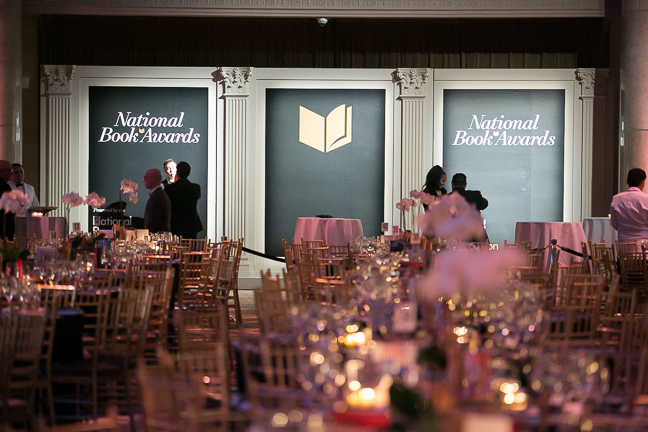 Surviving by poetry, reading for all, and love for assistants

Often referred to as the Oscars for books, the National Book Awards is definitely one of the most glamorous nights for the little ol’ literary world. At Cipriani’s, the room was dim, drenched in lavender lights and crisp white linens. The line for the afterparty snaked down the street on this surprisingly warm night. And celebrities of a non-literary caliber were out: Cynthia Nixon was the host for the night, and she charmed everyone by invoking her membership in the community of book nerds. The audience beamed at her endorsements of the healing, curative powers of literature that we all so believe in. Bill Clinton presented the Literarian Award to Dick Robinson of Scholastic, a man he said he is personally grateful for—Dick once sent him and Hillary Harry Potter books the night before they went on sale (kind of a rude brag for the rest of us who waited in line, but fine). Dick Robinson noted the fullness of the crowd and went on to say that equal education is the way to ensure a democratic society—“Access to reading cannot be a matter of status.” He closed his speech with a motto to tattoo: “Tonight’s battle cry: Reading for all!”

Anne Hathaway came onstage to present Annie Proulx with a lifetime award. Her speech was earnest and tearful and dare we say, just right. (Later, Steph Opitz also admitted she had been so pleasantly surprised and moved by her speech.) Annie Proulx took the stage and delighted everyone by saying that she had not begun writing until she was 58—finally, we all thought, the last thing we need is another young wunderkind we can compare ourselves to (just me?). All hail Annie Proulx, who referenced our dark and turbulent times with grace.

After a break for dinner, the big awards were announced. Robin Benway won the Young People’s Literature Award for Far From the Tree. In her speech, she thanked all assistants everywhere, a true crowd-pleaser, though maybe if she’d shouted it at the afterparty it would have been even more effective. “It’s all about getting up and making the coffee,” she said. “If my father were here, he’d be very proud but would then tell me to get back to work.”

For poetry, Frank Bidart won over a stacked group of finalists including Danez Smith, Leslie Harrison, Shame McCrae, and Layli Long Soldier; he told the audience, “I’ve realized over the past few months that I’m almost twice as old as over half of the finalists. I survived by writing these poems.” I’ve become more sure that poetry is the key to survival—the creation and the consumption equally important modes—and I loved his confirmation.

Masha Gessen won the award in nonfiction and took the stage saying, “I was rooting for another finalist, so I don’t have notes.” Jacqueline Woodson was up next to present the fiction award, first citing the amount of work the judges have to do. “We read over 300 hardcovers for this and carried them all over the world. I love you so much,” she said to her fellow judges, “but I never want to do this again.” I loved the appreciation that was on display for the judges and the assistants and most of all, the readers. We can’t forget that’s who makes the room light up.

And then Jesmyn Ward won the big award for her novel Sing, Unburied, Sing, and it came with a standing ovation—well-deserved, as she is both the first woman and the first Black writer to join the ranks of the multiple National Book Award winners. She shouted out all of the great indie bookstores in her home state of Mississippi and gave a heartfelt speech, making reference to past rejections, the subtext of which was often “these aren’t universal stories.” It’s heartening to see how our limited definition of universal is growing each day.

With a final resonant message that books matter, the ceremony moved into the afterparty. I saw the lovely Deirdre Coyle, who had on gray graveyard-decorated nails that she got from the after-Halloween sale at the drugstore. Genius! Katie Raissian, usually such a typical New Yorker in neutrals, had even put on colors for this party. Raad Rahman was glowing with that just-filed-an-article sparkle. Halimah Marcus and Steph Opitz both wore decadent floor-length velvet. Tony Tulathimutte had on a white Lacoste cardigan, and when I commented on his casual country club attire, he told me that he only gets dressed up if he’s winning the award. Weike Wang, one of the National Book Foundation’s 5 Under 35, looked like a movie star in her strapless, statuesque dress, and so did Ariel Lewiton in red lipstick and a dazzling skirt, though which one was up for debate: “I thought Anne Hathaway already left!” someone said to her as they snapped her picture. Personally, I think she had more of a Parker Posey vibe.

Buzzfeed’s Jarry Lee asked me how my month at Millay Colony was, and she talked about craving nature. I will say, there were a lot of pretty orchids on the tables, which there weren’t a lot of in rural upstate New York. The Irish contingent, Dan Sheehan and Lucie Shelley, told me for some reason how they both support the Charlotte Hornets (I had to ask for clarification what kind of sport that was, and I’ve already forgotten). Yahdon Israel was making the rounds in a floral blazer and stopped to talk to me about Jesmyn Ward. He said how there’s always so much debate around these awards and the winners, but she was such a clear choice. “She made the night.” I talked poetry with James Yeh; I just finished the luminous Thousand Star Hotel by Bao Phi, and he recommended Nazim Hikmet. As the party wound down, guests stole almond cookies off the trays and collected their business-card-sized invitations to the after-after-party at Ulysses down the street. 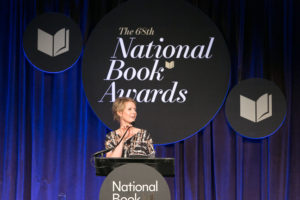 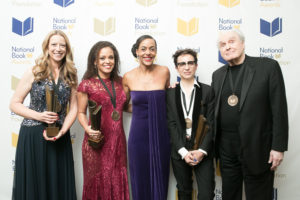 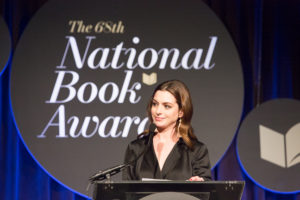 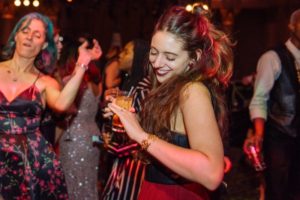 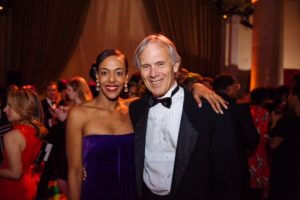 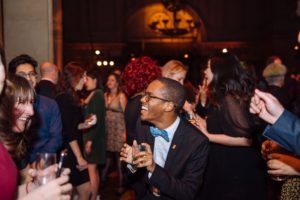 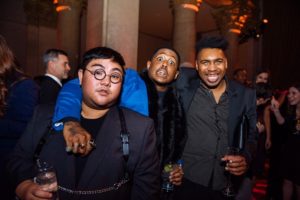 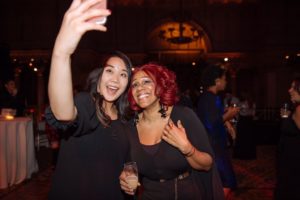 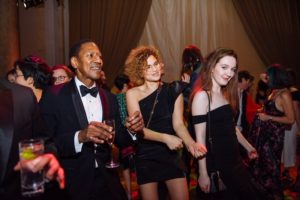 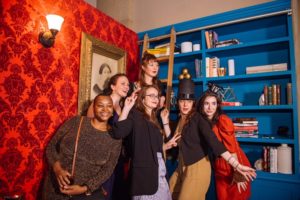 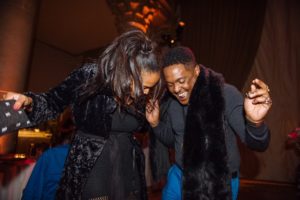 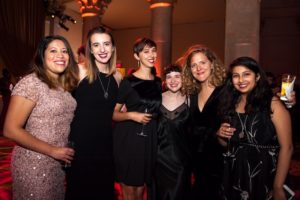 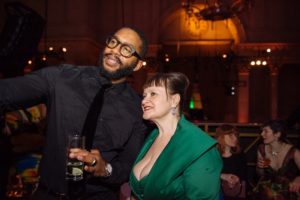 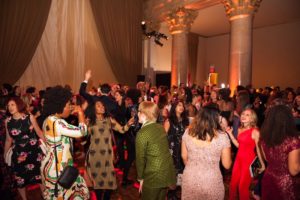 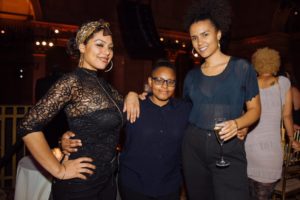 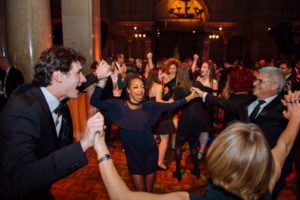 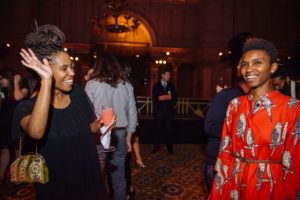 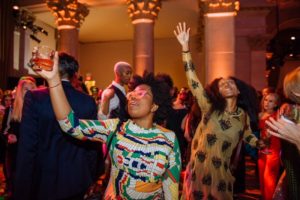 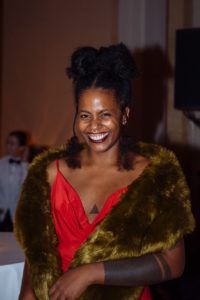 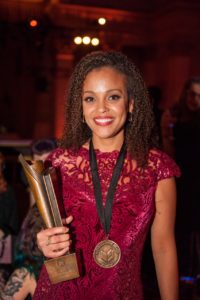 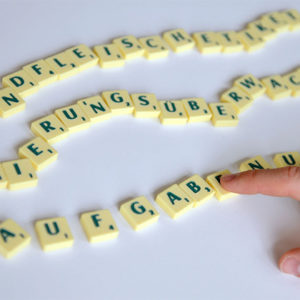 In the early 90s, I had a puzzling conversation with a college classmate. He told me about a movie he'd seen. I asked him if he liked...
© LitHub
Back to top
Loading Comments...