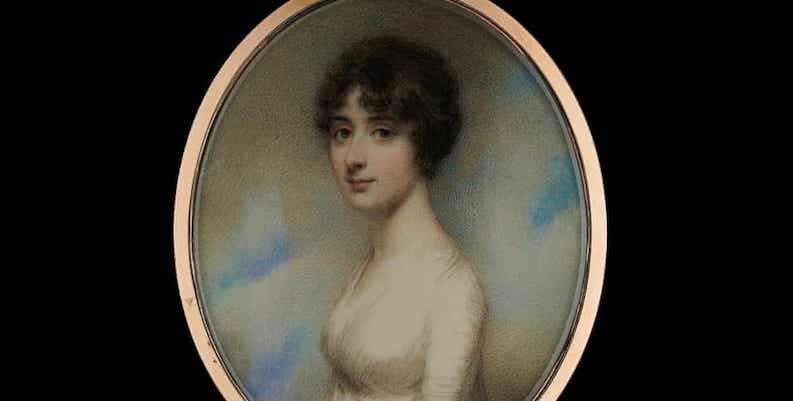 Long before Tinder, there was Jane Austen, warning your dates and their families that you looked nothing like your picture: in this instance, her subject was Mary Pearson, a portrait of whom has recently been discovered and acquired by Jane Austen’s House museum.

Pearson, who likely inspired Lydia of Pride and Prejudice, Austen’s most famously irritating (or, as Mark Brown at The Guardian gently puts it, “gleefully spirited”) character, was engaged to Jane’s brother Henry for a few months in 1796. He was serving in the armed forces at the time. A few months after the engagement began, Austen made it pretty clear what she thought of Pearson in a letter to her sister Cassandra that achieves some next-level mix of catty, concerned, and faux-diplomatic:

If Miss Pearson should return with me, pray be careful not to expect too much Beauty. I will not pretend to say that on a first view, she quite answered the opinion I had formed of her. My Mother I am sure will be disappointed, if she does not take great care. From what I remember of her picture, it is no great resemblance. [September 1796]

Their engagement eventually ended, and later in the fall, their cousin Eliza de Feuillide wrote:

Our Cousin Henry Austen has been in Town: he looks thin & ill-I hear his late intended is a most intolerable Flirt, and reckoned to give herself great Airs-The person who mentioned this to me says She is a pretty wicked looking Girl with bright Black Eyes which pierce thro and thro, No wonder this poor young Man’s heart could not withstand them.

As punishment for the sins of not looking like a portrait that one time and having bright Black eyes, she was written into history as Pride and Prejudice’s Lydia, a socially clueless and boy-crazy girl who only narrowly escapes total financial ruin because of the pity of a rich man who has a crush on her hot, smart sister. Also, Henry married Eliza the following year, so that’s how that ended.

Thus, her legacy has, inevitably as death itself, turned into memes like these:

Darcy, proposing marriage: Your family is a disgrace.

Everyone but Mrs Bennet when Wickham comes back after marrying Lydia – Bianca pic.twitter.com/NdFVESMxFU