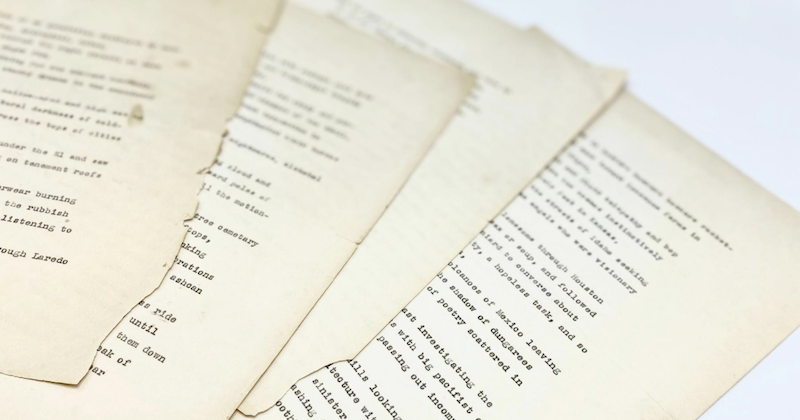 A new original draft of Allen Ginsberg’s “Howl” has just been discovered.

Angel-headed hipsters rejoice: a new carbon typescript of Allen Ginsberg’s “Howl” has been discovered by rare books dealer and Beats specialist Brian Cassidy among the papers of Annie Ruff.

It’s a big discovery—the newly discovered “Howl” typescript is an early draft that differs significantly from published versions, and even from the known top-copy draft housed at Stanford with Ginsberg’s papers. The main difference is page seven: this draft has an uncorrected version page seven as it was originally typed, before Ginsberg retyped the entire page, changing it significantly. This uncorrected version, until now, has not been represented in Ginsberg’s papers.

Examining this copy, it’s evident that it’s the exact carbon struck on Ginsberg’s own typewriter, and orientations of the text, parallel impressions, and revisions visible both on the top copy and this carbon all match the original held at Stanford—but the carbon is in its original uncorrected state, while the top copy was later corrected by Ginsberg. This means the two copies can be directly compared to gain a previously unknown window into Ginsberg’s creative process on “Howl.”

This revelation is hugely exciting, and quite surprising given the poem’s fame and age. “To say that finding an original previously unknown draft of major American work of literature is unusual is certainly an understatement,” said Cassidy. “And given that ‘Howl’ was famous pretty much from its inception, that an original typescript for it could have been unknown for this long . . . I was just blown away.”

The typescript is currently for sale at Type Punch Matrix.