A New Law Is Causing Problems for California Booksellers

“I don’t think there’s any way to comply."

A new California law aimed at cutting back on the sale of fraudulent collectibles has the potential to cause serious problems for local booksellers when it goes into effect at the end of this month. The law, Assembly Bill No. 1570, which was authored by State Representative Ling Ling Chang, serves to amend an already existing regulatory law, expanding the term “collectible” from referring specifically to sports memorabilia to encompassing any signed item. According to The New York Times, the amendment to the bill was propelled in part by actor Mark Hamill, who was frustrated by the sale of items bearing his (false) signature.

The law will require any signed item sold for over $5 to be accompanied by a detailed certificate of authenticity, which must, among other things, include the name and address of any third party to own the item (read: anyone who sold a signed book to a used bookstore) along with a seller-generated identifying serial number; these records must be retained by the seller for seven years.

Bill Petrocelli of Book Passage expressed his concerns about the practicality of the bill for booksellers in a phone interview. “I don’t think there’s any way to comply,” he said. “If we are held to be subject to the terms of the bill, we would be kind of in dire straits, because the reporting requirements are just ridiculous.”

Scott Brown of Eureka Books highlighted another problem. “While I find the paperwork a real bother, my biggest concern is privacy, and that could affect anyone in California,” he wrote in an email.

“Let’s say that five years ago a Neil Gaiman fan got a bunch of books signed,” Brown explained. “Now she’s ready to part with them and takes them to my shop. As of January 1, I am required by state law to record the name and address of the source of every signed item and to put it on a Certificate of Authenticity (COA). That COA must be given to the person who buys the books from me. If I don’t issue a COA, I can be liable for ten-times damages, plus court costs and attorneys fees.

Since this law applies to items worth as little as $5 and since most used books are worth $5, basically any signed book falls under these regulations. I don’t know very many people who are comfortable with complete strangers getting their name and address just because they happened to get a book signed.”

As Brown points out, penalties for breaking the rules are particularly draconian. The bill stipulates that if a seller does not provide a proper COA, a buyer “shall be entitled to recover, in addition to actual damages, a civil penalty in an amount equal to ten times actual damages, plus court costs, reasonable attorney’s fees, interest, and expert witness fees, if applicable, incurred by the consumer in the action. The court, in its discretion, may award additional damages based on the egregiousness of the dealer’s conduct.”

“I’ve never seen anything like that,” Petrocelli told me. “I used to practice law, and I’ve never seen a penalty in a civil case quite that high. In an anti-trust case, sometimes they’ll award treble damages. But ten times actual damages? I jokingly said to someone, and I still kind of believe it: you can leave nuclear waste on the sidewalk in front of your store and you wouldn’t be subject to a penalty that big.”

While Petrocelli thought a “legitimate customer” would never bring a lawsuit against a bookstore, he does worry that the law exposes booksellers to “professional litigators,” those who make a habit out of exploiting holes in legislation, and who might be seeking an easy payday.

The law could also cause trouble for other members of the book industry. “Now, if I were a publisher,” Petrocelli said, “and I were in the habit of slipping autographs into published books—autographs that are done either by an autograph machine or by the author signing a leaf which is then slipped into the book and sent out that way, with the autograph already in it—I would get a little nervous about this statute, because that’s a situation where a bookseller is in no position to know whether it’s legitimate or not.”

After booksellers in California began voicing their concerns about the bill, State Representative Chang published a letter of intent on her Facebook page which clarifies that the law was not meant to include booksellers, which could potentially be helpful to the defendants if a case were ever brought before a judge.

However, many booksellers are not comforted by the letter. “Unfortunately, a letter of intent from a legislator has little or no legal weight (particularly if said legislator regretted the poor wording of the bill she wrote after it was signed),” Brown told me. Things are more complicated, too, because Representative Chang was recently voted out of office, making the future of the bill unclear. “Much legislative action depends on a bill’s sponsor, and now AB1570 is something of an orphan as it goes into effect,” Brown said. “The main purpose of this letter was to try and divert attention from the law, which was starting to cause her problems in what was one of the closest elections in California this year.”

I Hate My Dogs (I Love My Dogs) 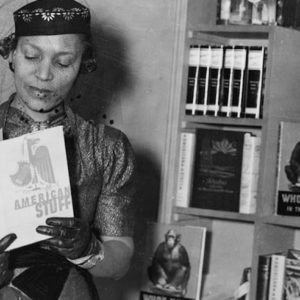 We are thrilled to be partnering with Words in Solidarity, a new monthly series founded by Kendall Storey and Ben Clague....
© LitHub
Back to top