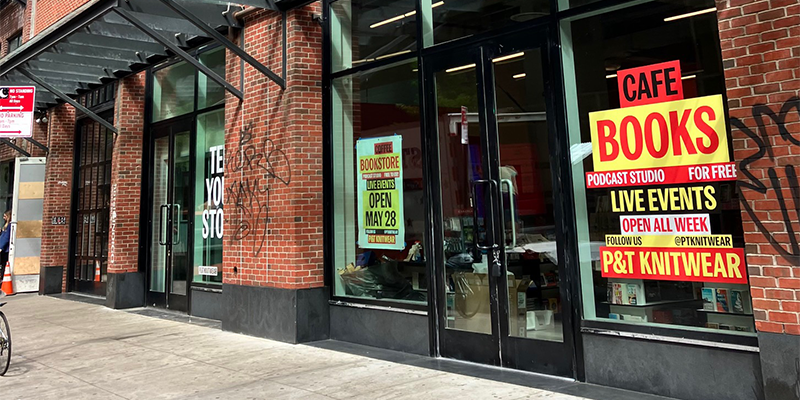 A new community-oriented bookstore has opened on the Lower East Side.

On Friday night, P&T Knitwear opened its doors on the Lower East Side to celebrate its grand opening. Any new indie bookstore/cafe is cause for applause, but this one in particular has a few fun bells and whistles worth mentioning!

When you first walk in, what’s probably most noticeable is the amphitheater-style seating (fits 80!), designed to be a community watering hole/event space. (Even though they are a bookstore, they’re encouraging of events that aren’t tied to a book launch, which is awesome.)

Discreetly tucked under the seats, there’s also a podcast studio. And the best part is: it’s free to use and open to the community, which means you and your friends finally have the chance to start recording that talk show you’ve been dreaming about for ages.

They also have a super cool Community First Program, which donates a portion of their proceeds to a different local nonprofit every month. It’s in their mission statement: “P&T Knitwear exists to fortify the community.”

Is there anything P&T Knitwear doesn’t do? Well, sell knitwear—though the name does pay homage to founder Bradley Tusks’s grandfather, who ran a sweater shop in the 1950s in the same neighborhood.