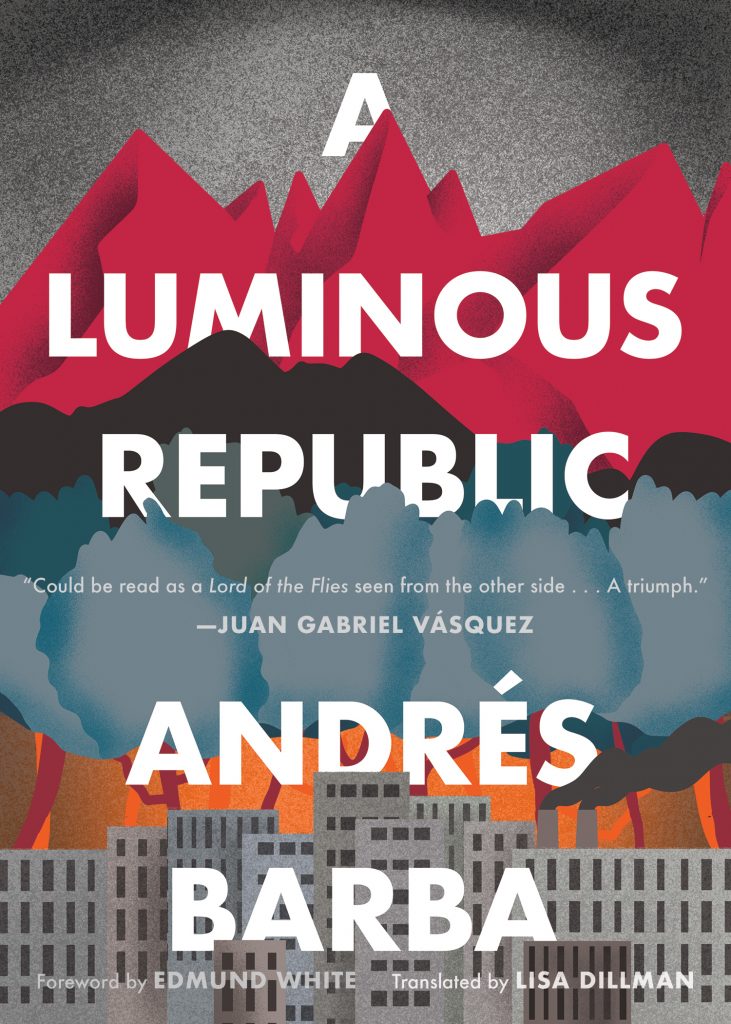 The following is a story from Andrés Barba's A Luminous Republic. Barba is the award-winning author of numerous books, including Such Small Hands and The Right Intention. One of Granta's Best Young Spanish novelists, he received the Premio Herralde for Luminous Republic, which will be translated into twenty languages. Lisa Dillman translates from Spanish and Catalan and teaches in the Department of Spanish & Portuguese at Emory University.

When I’m asked about the thirty-two children who lost their lives in San Cristóbal, my response varies depending on the age of my interlocutor. If we’re the same age, I say that understanding is simply a matter of piecing together that which was previously seen as disjointed; if they’re younger, I ask if they believe in bad omens. Almost always they’ll say no, as if doing so would mean they had little regard for freedom. I ask no more questions and then tell them my version of events, because this is all I have and because it would be pointless to try to convince them that believing, or not, is less about their regard for freedom than their naïve faith in justice. If I were a little more forthright or a little less of a coward, I’d always begin my story the same way: Almost everyone gets what they deserve, and bad omens do exist. Oh, they most certainly do.

The day I arrived in San Cristóbal, twenty years ago now, I was a young civil servant with the Department of Social Affairs in Estepí who’d just been promoted. In the space of a few years I’d gone from being a skinny kid with a law degree to a recently married man whose happiness gave him a slightly more attractive air than he no doubt would otherwise have had. Life struck me as a simple series of adversities, relatively easy to overcome, which led to a death that was perhaps not simple but was inevitable and thus didn’t merit thinking about. I didn’t realize, back then, that in fact that was what happiness was, what youth was and what death was. And although I wasn’t in essence mistaken about anything, I was making mistakes about everything. I’d fallen in love with a violin teacher from San Cristóbal who was three years my senior, mother of a nine-year-old girl. They were both named Maia and both had intense eyes, tiny noses and brown lips that I thought were the pinnacle of beauty. At times I felt they’d chosen me during some secret meeting, and I was so happy to have fallen for the pair of them that when I was offered the opportunity to transfer to San Cristóbal, I ran to Maia’s house to tell her and asked her to marry me then and there.

I was offered the post because, two years earlier in Estepí, I had developed a social integration program for indigenous communities. The idea was simple and the program proved to be an effective model; it consisted of granting the indigenous exclusive rights to farm certain specific products. For that city we chose oranges and then tasked the indigenous community with supplying almost five thousand people. The program nearly descended into chaos when it came to distribution, but in the end the community rallied and after a period of readjustment created a small and very solvent cooperative which to this day is, to a large degree, self-financing.

The program was so successful that the state government contacted me through the Commission of Indigenous Settlements, requesting that I reproduce it with San Cristóbal’s three thousand Ñeê inhabitants. They offered me housing and a managerial post in the Department of Social Affairs. In no time, Maia had started giving classes at the small music school in her hometown once more. She wouldn’t admit it, but I knew that she was eager to return as a prosperous woman to the city she’d been forced by necessity to leave. The post even covered the girl’s schooling (I always referred to her as “the girl,” and when speaking to her directly, simply “girl”) and offered a salary that would allow us to begin saving. What more could I have asked for? I struggled to contain my joy and asked Maia to tell me about the jungle, the river Eré, the streets of San Cristóbal . . . When she spoke, I felt as if I were heading deeper and deeper into thick, suffocating vegetation before abruptly coming upon a heavenly Eden. My imagination may not have been particularly creative, but no one can say I wasn’t optimistic.

We arrived in San Cristóbal on April 13, 1993. The heat was muggy and intense and the sky completely clear. As we drove into town in our old station wagon, I saw in the distance for the first time the vast brown expanse of water that was the river Eré and San Cristóbal’s jungle, an impenetrable green monster. I was unaccustomed to the subtropical climate and my body had been covered in sweat from the moment we got off the highway and took the red sand road leading to the city. The drive from Estepí (nearly a thousand kilometers) had sunk my spirits into a deep state of melancholy. Arrival had, at first, been dreamlike, but then abruptly taken on the ever harsh contours of poverty. I’d been expecting the province to be poor, but true poverty resembles the imagined sort very little. At the time I didn’t yet know that in the jungle poverty is leveled, that the jungle normalizes and, in a sense, erases it. One of the city’s mayors said that the problem with San Cristóbal is that the sordid is always but a small step from the picturesque. This is quite literally true. Ñeê children’s features are very photogenic despite—or perhaps because of—the grime, and the subtropical climate encourages the magical thinking that their condition is somehow inevitable. To put it another way: a man can fight another man, but not a torrent or an electrical storm.

But I’d also noticed something else from the station wagon window: that San Cristóbal’s poverty could be stripped to the bone. The colors were flat, vital and insanely bright: the jungle’s intense green, which ran up to the road like a wall of vegetation, the earth’s brilliant red, the blue sky so dazzling it forced you into a constant squint, the dense brown of the river Eré extending four kilometers shore to shore—all of it signaling so clearly that I had nothing in my mental repertoire with which to compare all that I was then seeing for the first time.

When we reached San Cristóbal we went to city hall for the keys to our house, and a civil servant came along in the station wagon to show us the way. We were nearly there when suddenly I saw, less than two meters away, a huge German shepherd mix. The feeling I got—no doubt induced by exhaustion from the trip—was almost phantasmagorical; it was as though, rather than having crossed the street, the dog had simply materialized in the middle of it, out of nowhere. There was no time to brake. I gripped the wheel as tightly as I could, felt the impact in my hands and heard a sound that no one who has heard it could ever forget—that of a body slamming into the bumper. We jumped out of the car. It was a female dog, badly injured, panting and avoiding our eyes as if ashamed of something.

Maia bent over her and stroked her back, and the dog responded with a slight wag of her tail. We decided to take her straight to a veterinarian, and on the way, in the same station wagon that had hit her, I got the feeling that this wild stray was two contradictory things at once: a benign presence and a terrible omen, a friend welcoming me to the city but also a messenger delivering alarming news. It struck me that even Maia’s face had changed since our arrival, and was now both more common—never had I seen so many women who looked like her—and more concentrated; her skin looked softer and at the same time tougher, her expression both harder and less rigid. Maia had put the dog on her lap and blood had begun to soak her pants. The girl was in the back seat, eyes glued to the wound. Every time the car drove over a pothole the dog turned and let out a musical whimper.

They say either you have San Cristóbal in your blood or you don’t, a cliché used for hometowns all over the world, but here it has a less mundane and more extraordinary dimension. Because, of course, blood is exactly what has to acclimatize to San Cristóbal, what must change temperature and succumb to the force of the jungle, of the river. The Eré itself, all four kilometers wide, has often struck me as a vast river of blood, and there are trees in this part of the country whose sap is so dark it’s almost impossible to think of them as plants. Blood courses through everything, it fills everything. Beneath the green jungle, beneath the brown river, beneath the red earth there is always blood, a blood that flows and completes things.

My baptism, therefore, was literal. When we got to the veterinarian, the dog had almost no chance and, as I carried her in my arms, I became soaked with a viscous liquid that turned black upon contact with my clothes and gave off a repulsive saline odor. Maia insisted on getting the wound on the dog’s hindquarters stitched up and having her leg put in a cast, and the animal closed her eyes as if to say she had no intention of putting up any more fight. Her closed eyes seemed to flit nervously beneath their lids, like humans when they dream. I tried to imagine what she might be seeing, what kind of wild jungle adventure she might be reproducing in her brain, and wished for her recovery and survival as if my own safety here were largely dependent on it. I approached her and put a hand on her hot snout in the belief, maybe even the conviction, that she would understand me and stay with us.

Two hours later the dog was on the patio of our house, eyes watering, and the girl was making her a plate of rice and leftovers. We sat together and I told her to come up with a name. The girl scrunched up her nose—her natural expression when dramatizing indecision—and said, “Moira.” And that’s still her name as she dozes a few feet from me all these years later, an old dog lying in the corridor. Moira. Considering that, against all predictions, she has outlived half the family, perhaps it’s not so unlikely that she’ll outlive us all. Only now do I understand her message. 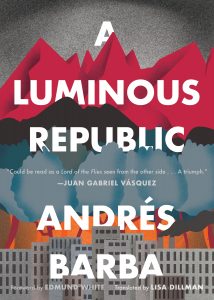 'Literary Bookstores, Can They Survive?' And other cover lines from 50 years of Poets & Writers. 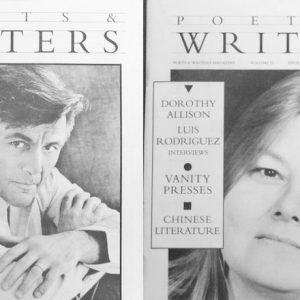 'Literary Bookstores, Can They Survive?' And other cover lines from 50 years of Poets & Writers. Poets & Writers is celebrating its 50th anniversary in 2020. The organization began in 1970 with a program—which continues...
© LitHub
Back to top
Loading Comments...