How a Group of 20th Century Arctic Explorers Celebrated the Holidays

It is easy to be cynical, but sometimes we should stop and ask ourselves: How far would we go to celebrate the holidays?

At their heart, the holidays are about finding ways to make imperfect situations as perfect as we possibly can. They’re about overcoming loneliness through acts of generosity and connectedness, and about acknowledging how those acts elevate our spirits.

Consider an extreme example of the lengths people go to in order to create a comforting sense of normality on December 25. In June 1913, seven American men went north in search of a mysterious new continent, called Crocker Land, that the famed Arctic explorer Robert E. Peary claimed to have sighted out in the polar sea seven years earlier. After leaving New York City, their ship carried the Crocker Land expedition far above the Arctic Circle before depositing it in extreme northwest Greenland, at a place called Etah, an Inughuit (the local tribe of Inuits) hunting camp and a jumping-off point for several decades’ worth of polar travelers. Sitting at 78°19’ latitude, Etah was less than 400 miles from Santa’s North Pole workshop and 2,000 miles due north of New York. The nearest tree was hundreds of miles away, and the nearest settlement was a thousand miles south, in Danish Greenland.

The Crocker Land expedition marked one of the last times that a small group of people would be so isolated—both physically and emotionally—from their friends and loved ones. As of Christmas, 2016, we can bridge these gaps through Skype, phone calls, and the humble greeting card. The Crocker Land expedition possessed no such luxuries. They did bring a radio transmitter north with them, a hulking mass of metal and tubes, but it never worked properly despite the team’s best efforts. They were cut off and alone. Only one of them, expedition leader Donald MacMillan, had ever visited the Arctic before. The other six were Arctic rookies who had never hitched up a sled dog or worn sealskin boots.

At Etah, the natural world exists on a grand scale, from the horseshoe of cliffs encircling the harbor, to the glacier overlooking the inlet, to the ice floes that knitted into an impenetrable sheet as fall turned to winter. The landscape assumes a hulking, looming quality that renders humans insignificant. Some of the Crocker Landers, fully grown and physically hale men, found Etah terrifying, especially once winter set in. The sun dipped below the horizon, where it would lurk unseen until spring. Gloomy blue, brown, and black hues engulfed Etah in a ghostly gloom. Pops and cracks from the shifting ice ricocheted off the cliffs. Temperatures plunged below -30 degrees.

For all the spookiness, the men managed to find elements of familiarity, most notably in the small lodge they brought with them. The squat, wooden structure was small, encompassing only around 1,200 square feet of living space for the seven men, but at least it was weathertight. It was by any measure the finest home ever built in the Arctic to that time, a little house on the tundra that provided both physical and psychological comfort.

The Crocker Landers decorated their bedroom nooks with tiny American flags and photographs of the loved ones they left behind, and might never see again. Expedition surgeon Hal Hunt affixed pictures of his wife and young daughter above his bunk so his family would be the first thing he saw each morning.

Months of darkness, howling winds, and isolation devastated their morale. Everyone felt lethargic. Sleep schedules went haywire. The men bickered over card games. One of them, handyman Jonathan “Jot” Small, sank into a full-blown depression. As the calendar dragged into December, team members sulked in their rooms, writing letters home—letters that had no chance of being delivered.

MacMillan often repeated the apocryphal story of an Arctic explorer who sat paralyzed in his quarters, balancing a handkerchief in his hand and trying to decide whether he should bring it on a sledging trip. Every ounce mattered when planning an expedition, and MacMillan had made thousands of small yet weighty decisions. Every book he brought meant one less pound of coal. Every can of food meant one less box of bullets.

For all that, MacMillan made a conscious decision not to skimp on Christmas. That summer, back in New York, he had laid plans to bring a hint of normality to what he suspected would be a highly abnormal situation.

MacMillan directed his subordinates to an unopened crate. Prying it apart, the men found an artificial Christmas tree and yards of festive ribbon inside. Nor did the surprises stop there. Inughuit women strung popcorn around the lodge’s common area. Dozens of natives descended on Etah from nearby hunting grounds. Eventually, 61 Inughuit—nearly a third of the tribe—were on the scene. MacMillan had invited them not only to enhance the festive spirit, but also to recruit them. He would need plenty of help when his party set out next spring for the mysterious Crocker Land.

On Christmas Eve, all the Americans in the lodge took baths, some of them for the first time in months.

There was only one thing wrong: Jot Small and expedition biologist Maurice Tanquary were away visiting native settlements somewhere to the south. “There is no prospect of the boys arriving home for the Christmas evening concert,” MacMillan lamented.

December 25th broke clear and crisp, with calm winds and temperatures around -15 degrees. Throughout the day the men peeked out the door, hoping for a glimpse of their two comrades. Elmer Ekblaw, a geologist whose sole qualification for Arctic travel was his “Scandinavian parentage,” which presumably gave him inherent defenses against the cold, took charge of the stove. Thinking of their guests first, Ekblaw prepared a feast of pemmican soup, boiled walrus meat, and stewed canned tomatoes for the Inughuit.

Then he turned to the special meal the expedition’s supporters had packed back in New York. While he hunched over the coal-burning stove, someone spread a tablecloth, the first they had seen since arriving in the north. Fitzhugh Green, a Navy ensign with an artistic bent, illustrated individualized place cards for all the Crocker Landers.

Ekblaw’s work consisted mostly of opening cans and plopping the contents into appropriate vessels. Nevertheless, the crew remembered the menu years later. Mock-turtle soup, roast turkey, and cranberry sauce. Corn, plum pudding, potatoes and gravy. Unfortunately, their bottles of wine had exploded from the cold, but the brandy was intact.

Everyone was sitting down to eat when a shout went up from outside. In poured Small and Tanquary, who had sledged pell-mell across the ice to make it home for Christmas. “Too late to do any of the work,” Ekblaw groused, with a wink in his eye.

Holiday music rang from the Victrola. After dinner (alas, the historical record is silent as to who did the dishes), the men sang along to “Stille Nacht, Heilige Nacht,” “Joy to the World,” and “Holy, Holy, Holy.” MacMillan took a few shaky, stilted photographs of the party.

It was time for gifts. The Americans distributed toys to the children and bags containing nuts and raisins to the adults. MacMillan portioned out a 17-pound fruitcake to the Inughuit visitors. They enjoyed it, or at least said they did.

The singing and gift-giving went on until midnight. Then came the ultimate gift: Post-dated cards and letters from home. Seven Americans, each of them hardened against the cold and strong as an ox, retreated to their rooms to read their hoarded mail in private. None of them revealed the contents of those messages in either their expedition diaries or in later writings. Those words, those beacons from home, belonged to them and them alone.

“Finally,” Ekblaw later wrote, “long after midnight, there was in Etah ‘on Earth peace, good will toward men.’” For the first time since they could remember, everyone was happy. It had taken an extraordinary effort, but generosity, sharing, love, and a little luck had produced a moment they would never forget. It was, MacMillan noted in his diary, a “glorious” day.

It’s worth asking again: How far would you go to celebrate the holidays?

David Welky is the author of The Thousand-Year Flood: The Ohio-Mississippi Disaster of 1937, The Moguls and the Dictators: Hollywood and the Coming of World War II, and other books. He is a professor of history at the University of Central Arkansas.

Rabih Alameddine is Amplifying the Images and Art of Aleppo 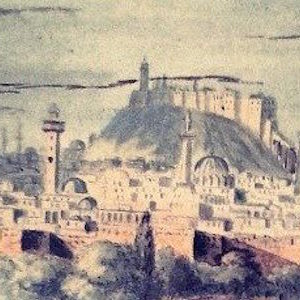 Rabih Alameddine is Amplifying the Images and Art of Aleppo

Rabih Alameddine is already one of my favorite writers—An Unnecessary Woman is a novel that every book nerd should read—but...
© LitHub
Back to top