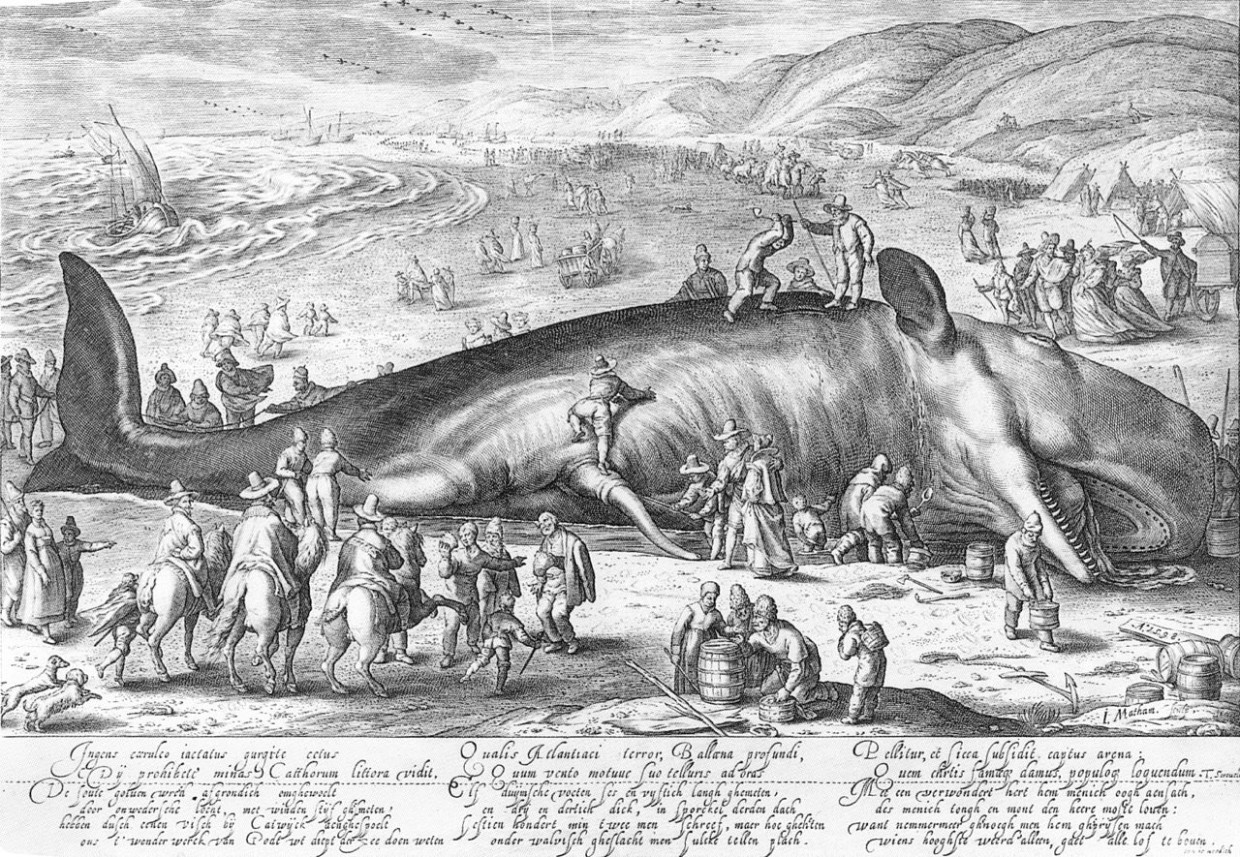 The benevolent behemoths through Human history

I think we can all agree with Herman Melville when he says, “to produce a mighty book, you must choose a mighty theme.” The theme to which he refers, obviously, is the whale. These benevolent behemoths have long occupied a proportional space in the human imagination. And although today, whales are enough a part of our daily lives to warrant two separate emojis, there was a time when they were deeply mysterious. In some cultures they were worshiped – in Inuit mythology, whales formed from the chopped off fingers of the goddess Sedna, and ancient Chinese mythology describes a fish with the hands and feet of a man ruling over the sea. But many tales envision whales as uncontrollable, bloodthirsty menaces (see the Leviathan, Bake-kujira, ketos, and kraken). Let us endeavor to determine how we arrived here and to pour one out for the cetaceans lost along the way.

In a whale story even more famous than Moby-Dick, the prophet Jonah refuses to proclaim judgment on Ninevah, attempts to flee, is thrown overboard by shipmates eager to please God, and is subsequently swallowed by a whale. After three nights in its stomach, he repents and is vomited ashore, safe and sound. The drama with God continues; the whale is not heard from again.

Aristotle, who is still known today for being very smart, distinguished between toothed and baleen whales in his natural history text; this taxonomic division continues to be used. He also wrote detailed observations of bottlenose dolphins and sperm whales and was able to estimate their life spans, a difficult feat when it comes to marine animals. Historia Animalium was an attempt to apply philosophy to the natural world by dividing animals into universal groups, making it a pioneering work of zoology that influenced scientists for thousands of years. However, it included a great deal of misinformation, like the fact that human males have more teeth than human females. How Aristotle was able to estimate the lifespan of barely visible creatures and not properly count the teeth of individuals with whom he interacted daily remains a mystery.

77: Naturalis Historia by Pliny the Elder

In Naturalis Historia, Pliny describes “the skeleton of the monster to which Andromeda in the story was exposed,” which “was 40 ft. long, the height of the ribs exceeding the elephants of India, and the spine being 1 ft. 6 inches thick.” It is probably safe to assume that the bones belonged to a sperm whale. In the next passage, he graphically depicts killer whales slaughtering another pod:

This is known to the killer whale, a creature that is the enemy of the other species and the appearance of which can be represented by no other description except that of an enormous mass of flesh with savage teeth. The killer whales therefore burst into their retreats and bite and mangle their calves or the females that have calved or are still in calf, and charge and pierce them like warships ramming. The whales being sluggish in bending and slow in retaliating, and burdened by their weight, and at this season also heavy with young or weakened by travail in giving birth, know only one refuge, to retreat to the deep sea and defend their safety by means of the ocean.

Thus Pliny, a very lucky man, encountered at least three breeds of whales in his journeys.

Dicuil was a monk and geographer who served as a scholar at Charlemagne’s court; however, he was both cowardly and stupid in his writings about whales. In his book about geography, he described them as such:

About [the shores of Asia] leap numerous whales as large as mountains, fed by the vast Red Sea. Over their back and shoulders runs a terrible spine, bringing death and fate beneath their savage mouths. They are wont to suck down both ship and crew alike.

This Norwegian educational text was intended to encompass everything King Magnus Lagabøte should know about politics and morality; this, of course, included whales. Twenty-one folk categories of whale are cataloged and described in terms of their friendliness, potential threat, and edibility. A sample passage:

There are certain other types which are worth a passing mention only, namely the “raven whale” and the white whale. The white whales are so named because of their show white color, while most other varieties are black, except that some of them have spots, such as the “shield whale,” the “spear whale,” and the baleen whale. All these kinds that I have just mentioned may be freely eaten and many other kinds too.

As goes without saying, all of this is very important for any king to know.

Considered by many to be the original science fiction story, “Micromégas” follows a 23-mile tall extraterrestrial on his voyages throughout space. He encounters a dwarf (standing a mere 6,000 feet tall), and the pair makes it to earth, which they circumnavigate in 36 hours. They determine the planet to be devoid of life until they notice the movement of a tiny spec – a sweet little whale.

1820: An Account of the Arctic Regions by William Scoresby

A key source for Moby-Dick, An Account of the Arctic Regions was written by the son of a famed murderer, who had 533 kills over the course of his career as a whaler. Scoresby wrote and illustrated this account of Arctic cetaceans – the bowhead, the beluga, and the narwhal.

1821: The Wreck of the Whale-Ship Essex by Owen Chase

Chase was the first mate of the Essex, which was rammed by an (allegedly) 85-foot sperm whale 2,000 nautical miles west of South America. The Captain wanted to head for the nearest islands, which were 1,200 miles away. Fearing cannibals, the crew voted to head for South America instead. This resulted in a 4,000-mile journey and, ironically, cannibalism. Of the original 21 crew members, 8 survived. This account, specifically, is credited as the source that inspired Melville to write Moby-Dick.

1839: The Natural History of the Sperm Whale by Thomas Beale

A trained surgeon, Beale sailed on a whaling ship, became fascinated by sperm whales, and provided the first accurate account of their physiology. His book served as a very strong source of “inspiration” for Melville, who lifted several passages directly from it.

A book about a man who is obsessed with a whale, but also so much more than that, you know?

1902: “How the Whale Got His Throat” by Rudyard Kipling

From Kipling’s Just So Stories, this tale illustrates how the gluttonous, ever-consuming whale was tricked into swallowing a clever human, who made a false throat from inside its stomach. Everything about this story is wrong and backwards, but this is Kipling that we’re talking about.

This unpublished screenplay is a dialogue-driven work about the nature of whales. Unfortunately for all of us, it is only available in the Cormac McCarthy Papers in the Southwestern Writers Collection at Texas State University. I present without comment one of the few quotes available on the Internet:

Whales have been evolving for thirty million years. To our one million. A sperm whale’s brain is seven times the size of mine… The great size of his body has little to do with the great size of his brain, other than as a place to keep it. I have What if fantasies… What if the catalyst or the key to understanding creation lay somewhere in the immense mind of the whale? … Some species go for months without eating anything. Just completely idle.. So they have this incredible mental apparatus and no one has the least notion what they do with it. Lilly says that the most logical supposition, based on physiological and ecological evidence, is that they contemplate the universe… Suppose God came back from wherever it is he’s been and asked us smilingly if we’d figure it out yet. Suppose he wanted to know if it had finally occurred to us to ask the whale. And then he sort of looked around and he said, “By the way, where are the whales?

2000: In the Heart of the Sea by Nathaniel Philbrick

An award-winning retelling of the saga of the whale-ship Essex, In the Heart of the Sea combines Owen Chase’s account with that of Thomas Nickerson, a teenage cabin boy who wrote about his experience in old age. Nickerson’s version wasn’t discovered until 1960 and remained unauthenticated for another 20 years. A movie version is forthcoming, featuring a Hemsworth, a hungry whale, and lots of CGI.

Drawing on this rich tradition, Hoare moves through biography, literary criticism, social history, and his own life to interrogate “humankind’s tortuous relationship with the whale, for the creature that we have pursued and exploited almost to extinction inhabits our collective imagination like no other on this planet.” His conclusion? Whales are, indeed, a potent metaphor, but also so much more. 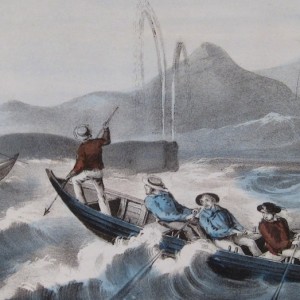 The following essay appears in issue 10 of  The Common. On Nantucket, 80-year-old Connie Congdon and I sat in her dim living...
© LitHub
Back to top
Loading Comments...