A Line Made by Walking 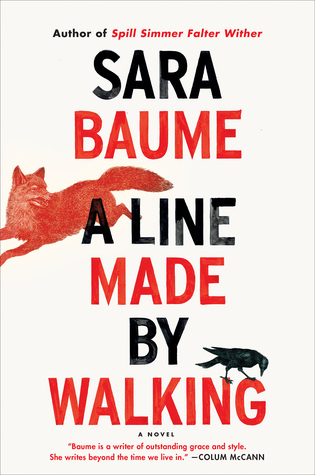 The following is from Sara Baume’s novel, A Line Made by Walking. Baume's first novel, Spill Simmer Falter Wither, won the Rooney Prize for Irish Literature, the Sunday Independent Newcomer of the Year Award, the Geoffrey Faber Memorial Prize, and was short-listed for the Costa First Novel Award. She is also the recipient of the Davy Byrnes Short Story Award and the Hennessy New Irish Writing Award, and lives in Cork, Ireland.

Today, in the newspaper, a photograph of tribesmen in the Amazon rainforest. The picture taken from a low-flying aircraft. The men naked but for painted faces, lobbing spears into the air as high as they can lob them, trying to attack the largest and most horrifying sky-beast they’ve ever encoun­tered, ever imagined. The caption says they are believed to be from the last ‘uncontacted’ tribe.

What a thing, I think, that there are still. People. Out there.

And almost immediately, I forget.

A smudged-sky morning, mid-spring. And to mark it, a new dead thing, a robin.

Somehow, they always find me. Crouching in the cavern­ous ditches and hurling themselves under the wheels of my Fiesta. Toppling from the sky to land at my feet. And because my small world is coming apart in increments, it seems fitting that the creatures should be dying too. They are being killed with me; they are being killed for me.

I decide I will take a photograph of this robin. The first in a series, perhaps.

A series about how everything is being slowly killed.

Only it isn’t. The white strata are bunching into clouds. The bunches are competing with each other to imitate animals. A sheep, a platypus, a sheep, a tortoise. A sheep, a sheep, a sheep. The leaves are breaking out, obscuring the white strata, the sky animals, the irregular spaces of cerulean be­tween everything. The fields of the daffodil farm on the other side of the valley are speckling yellow and yellower as I watch. Why do I feel as if I’m being killed when it’s the sea­son of renewal? Cars don’t crash when the days are long. Rapists don’t prey in the sunshine and old folk don’t catch pneumonia and expire in their rocking chairs. Houses don’t burn down in spring.

But these things aren’t true; Walt Disney lied to me. The weather doesn’t match my mood; the script never supplies itself, nor is the score composed to instruct my feelings, and there isn’t an audience. Most days I make it to dark without anybody seeing me at all. Or at least, anybody human.

I’ve been here in my grandmother’s bungalow a full three weeks now. All on my own. Except for the creatures.

My grandmother died during a gloomy October, as one ought, three Octobers ago.

On the night she died the tail of a hurricane made landfall. It was called Antonio and had travelled all the way from Ber­muda. It felled a tree which dragged down a wire and put out the lights across half the parish. Then the tree lay wretched on the ground, strangled by electric cable and blocking the road which led up the hill to her bungalow. My mother and aunts were trapped inside, but I wasn’t there and Mum didn’t phone until a couple of hours later. I was at work in a con­temporary art gallery in Dublin. Painting over the previous day’s scuff marks as I did every morning. Transforming the tarnished white into brilliant again.

Even though I had been expecting the call, I didn’t pick up immediately.

Even though I had been expecting my grandmother to die, I couldn’t believe it might happen in the morning.

For several rings my polyphonic ‘Radetzky March’ ech­oed irreverently around the exhibition space. When at last I answered, my mother confessed she hadn’t called me straight away. And so my grandmother died in the night af­ter all, as one should.

No change in the light. A temporary sleep becomes per­manent.

Antonio passed on and men from the County Council came in their dump truck to clear the road. By the time my Fiesta climbed her hill there were only broken bits of tree left scat­tered and a great wiggly hole in the earth where it had stood. I stole a branch from amongst the mess; I stole a branch be­cause I loved that tree; I loved that tree because it had ac­knowledged the ending of my grandmother’s radiant yet under-celebrated life by momentously uprooting itself.

‘When exactly did it fall?’ I asked my mother. ‘When she died or while she was dying, or after?’

The sound of the only tree I’ve ever heard falling began with a thunderous crack, the snapping of a monolith. The fall itself was unspectacular in comparison; it sounded like a thousand softer cracks in tuneless concord. There was no rustle and brush of leaves because it was winter and there were no leaves, because trees know in their heartwood that if they don’t surrender their foliage in autumn, high winds will sail them to the ground. They know they must expose their tim­ber bones to increase their chance of remaining upstanding through to another spring.

The only tree I ever heard falling I also saw falling. It was in the Phoenix Park beyond the place where elephants and tigers and oryxes are enclosed, before the place where deer rove, and I was roving too. It was an ash and it had dieback. It was felled not by high wind but by men in helmets and luminescent overalls.

‘No,’ my mother said, ‘I didn’t hear a thing.’ And when I asked my aunts the same question, they also said no.

Works about Falling, I test myself: Bas Jan Ader, 1970. The artist rolls off the roof of his house and lands in the shrub­bery, a filmed performance. His house is so American: clap­board, with a veranda. It doesn’t look like the sort of place a Dutch conceptual artist would live, but perhaps this is the point he was trying to make by climbing onto his roof to fall. I am not sure at what instant the film ends. The way I remem­ber it: the screen blacks out at the moment of impact. The way I remember it: Jan Ader chose not to show himself get­ting up again.

Why must I test myself ? Because no one else will, not any more. Now that I am no longer a student of any kind, I must take responsibility for the furniture inside my head. I must slide new drawers into chests and attach new rollers to armchairs. I must maintain the old highboys and side­boards and whatnots. Polish, patch, dust, buff. And, from scratch, I must build new frames and appendages; I must fill the drawers and roll along.

When I was five, I had the flu. Sitting up in bed, watching my bedroom wall. I must have had a soaring temperature which was causing me to hallucinate, but I didn’t know this at the time. I believed that what I could see was as true as the wall itself. What I could see was the whole of the world rolled flat. Each of the continents, every island. And they were swelling, stuffing up the sea, and I was screaming, because I believed I would be squeezed away, that there would be no space left for me to perch on the grossly overextended earth. Back there and then, this made certain, chilling sense, so I yelled until my mother came, and when she came, I couldn’t explain why I was yelling. For twenty years I couldn’t deci­pher what it was that had frightened me; it’s only now I un­derstand.

I understand how it can be that I am being killed when it is spring. I am being killed very slowly; now is only the out­set. My small world is coming apart because it is swelling and there’s no place for me any longer, and I still want to cry out but there’s no point because I am a grown individual, respon­sible for myself.

My mother will not come.

Anyway, what’s the point in perching on an earth without sea?

Once I saw a jackdaw flying amongst a flock of gulls. I was on the top deck of a bus, level with the flock. I witnessed the member of the family Corvidae who wanted to be—who maybe even trusted that he was—a seabird. I thought: I am that jackdaw. At home with the sea even though the sea is not my home, and never has been.

Works about Sea, I test myself: Bernard Moitessier, 1969. In promising position to win the first ever single-handed round-the-world yacht race, he chose to abandon the competition, veering off course for the finishing line, continuing on around the world again, going home to the sea.

But he was a sailor, and not a conceptual artist. I always forget about that.

DO NOT BE AFRAID, the angel Gabriel told the fright­ened people.

At midnight mass on Christmas Eve last year, the priest told us that DO NOT BE AFRAID is the phrase which appears most frequently in the scriptures. ‘It appears three hundred and sixty-five times,’ he said, ‘once for every day of the year.’ He was a man in his late sixties or early seventies and I cannot think of a single word to describe his manner and appearance other than ‘priestly’. He was so priestly it was hard to think of him as a person made from hair and limb and skin. All I could picture beneath his cassock was another slightly smaller cassock and another, and another. It was easier to believe the priestly priest was a matryoshka doll of cassocks rather than a man. I pictured him trawling through his bible, carefully shaping this vaguely radical message, appointing an occasion for its delivery. Christmas Eve is his busiest mass of the year, his sell-out gig. At quar­ter past midnight, in a pool of candlelight, the priestly priest delicately suggested that for too long the Catholic Church has instilled fear—that now it needs to spread a message which is old but was there all along: DO NOT BE AFRAID.

How laudable, I thought. But then, at the end of the ser­vice, he sent an altar boy down into the congregation carry­ing a wicker dish, collecting money from pew to pew, and I was so angry about this intrusion that his laudable message, his small concession, didn’t matter any more.

But mass hadn’t changed; I had. There was always a wicker dish. I even used to be the server who carried it down. And on all the Sundays I went to church as a child, the collection of money was as meaningless as everything else that occurred between the hardwood pews and fibreglass saints.

Why is it only now that I can see how many ordinary things are actually grotesque?

This robin is the first of the dead creatures I’ll record, but there were others before it; if there hadn’t been I’d never have thought to begin. Beaked and scaled and furred. Struck and squashed and slaughtered. Shape-shifting into plastic bags, sugar beet, knolls of caked mud. Blending into the tinctures and textures of the countryside. The tree which falls without any human hearing still falls, as the creatures who die without being found by a human still die. But it’s too late for them now. It begins today, with this robin.

Excerpted from A LINE MADE BY WALKING by Sara Baume. Copyright © 2017 by Sara Baume. Used by permission of Houghton Mifflin Harcourt Publishing Company. All rights reserved.

what was said on the bus stop: a new poem by Danez Smith 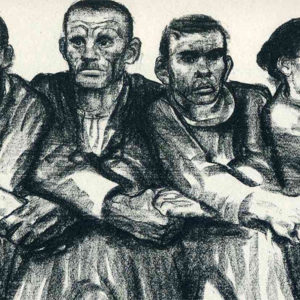 what was said on the bus stop: a new poem by Danez Smith lately has been a long time says the girl from Pakistan, Lahore to be specific on the bus stop when the white man asks...
© LitHub
Back to top