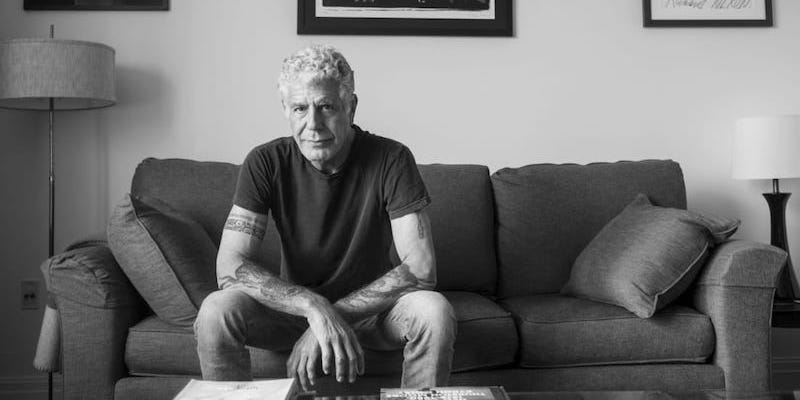 A natural-born exaggerator with a superb taste for the absurd, Tony was the ultimate storyteller. Tony’s way of looking at the world, his ability to transform the bland everyday into a fantastic reinterpretation of reality, only seemed to add more meaning and truth to the original event.

“Both versions of the scene will begin with the same shots of the train approaching the station. Keep my version straightforward, about food—with a passing reference to the hungry kids,” Tony said, talking a mile a minute, pausing only to light a cigarette. “We want to leave almost no hint of how badly things spun out of control in my version, skim over the ugliness and culpability and shame and spare the viewer the awkwardness we felt.”

Trying to focus over the sound of gunshots in the background, I struggled to keep up, scribbling down Tony’s edit direction in my notebook. We were standing in a modest backyard in the Hezbollah-controlled Dahieh suburb of Beirut, waiting for the cameras to finish setting up a family meal scene. As was often the case, while shooting one show, I’d be overseeing another through the post-production process. And, as was also common, the edit—in this case Madagascar—had hit a speed bump.

“It’s about the moral quandary of travel and white privilege. The camera is a liar. Drawing attention to it calls into question our own reliability and shows our hands aren’t clean.”

“I’m sorry, I’m still just having trouble understanding the justification for multiple versions of the food riot,” I said.

Tony rolled his eyes and sighed. “So, to clarify, the idea is at the end of the show, I ask Darren how he would tell what happened on the train. We then cut back to the train for Darren’s version, which this time includes the starving children stripping me of my food. Much bleaker. Much less flattering. Unsparing. Dark. Brutal. Frightening even. Darren’s version shows the reality on the ground in all its buzzkill awfulness.”

The Darren Tony was referring to was Darren Aronofsky, director of such films as Requiem for a Dream, Pi, Black Swan, and The Wrestler, among others. He’d accompanied us to Madagascar, the island nation off the southeast tip of Africa that most people associate with animated lemurs. However, environmental apocalypse, crushing poverty, and human suffering were more representative of what I saw. That speed bump in the edit revolved around what we’d assumed would be a routine food stop while on a scenic train ride to the coast.

A couple hours into the trip, our train stopped at an isolated jungle station. Cameras rolled as Tony and Darren disembarked in search of food, and much to everyone’s surprise the situation quickly began to spiral out of control. What started with a large crowd of local village children shouting and fighting over scraps of food, spare change, and even plastic recyclables soon devolved into a state of anarchy.

The children slammed their fists against the train in what appeared to be acts of violent begging. The few tourists on board tossed empty bottles out of the window in fear. There was the sound of crying among the screaming. The samosas we’d arranged for Darren and Tony to eat were ripped from their hands by the mob of hungry kids, and we had to retreated to the train. The desperation and poverty had been heartbreaking, the whole thing a dramatic and deeply unsettling reality check.

Tony viewed an end-of-the-episode conclusion as a betrayal of what was inevitably a much bigger and more complex subject. He’d always rather leave the audience thinking, keep them guessing, wondering.

“Darren’s version ends with the two of us sitting in stunned silence on the train afterward,” Tony said. “The contrast between our versions should be shocking.”

“Yeah…but I’m worried the multiple perspective pulls us out of the moment,” I said. “Doesn’t it kind of needlessly distract from the very serious issues we bring up in the show and instead call attention to us?”

“Exactly,” Tony said. “What do we include, what do we choose to leave out? Either way it’s our choice. It’s about the moral quandary of travel and white privilege. The camera is a liar. Drawing attention to it calls into question our own reliability and shows our hands aren’t clean. I want to show how manipulative even ‘honest, tell it like it is’ TV can be.”

That was one of the great things about Tony. He never shied away from complicated topics or from presenting himself in an unflattering light. And Tony wasn’t just honest about it, he often bent over backward to highlight just how manipulative the TV machine could be.

Tony was a brilliant writer with an exceptional imagination, gifted with the ability to write like he spoke. Despite being the smartest and most literate person I’ve ever met—capable of wielding the English language like a pillow or a sword, sometimes in the same sentence— Tony didn’t have much of a formal education. High school, one year at Vassar in which he said his most successful academic pursuit was scoring Quaalude prescriptions, and a Columbia writing workshop.

He often talked about his writing teacher, who had taught him to “kill your darlings.” This lesson became his most frequent creative direction. Tony repeatedly said, “The best piece of writing advice I can offer is to kill your baby. Lose what you think is your best line. It’ll be better.”

I remember Tony sitting in the recording booth reading voice-over when he trailed off mid-sentence. Looking up from the script, he asked, “What bong-smoking monkey wrote this? Did you sneak this in the script? It’s so heavy-handed with the drawing people together. We need a much lighter touch. You’re hammering all the stops on the organ like Elton John at a funeral. Subtlety. It’s a freaking virtue! I don’t mean just this specific line, I mean in general we’re falling into a formulaic, heartwarming get-out. Next it’ll be every fucking segment before commercials. You know…We’re going to have a group hug each episode, we keep this up. Is that what you want?”

He scowled at me over his reading glasses, one eyebrow raised high enough that I got the idea the question wasn’t rhetorical. I pressed the talk-back button and said, “Well, it’s just that I think we should say something nice, because the show has been a little sarcastic at times.”

“I know. So it’s particularly disingenuous and incongruous to turn around and get all schmaltzy at the end,” Tony said.

Tony viewed an end-of-the-episode conclusion as a betrayal of what was inevitably a much bigger and more complex subject. He’d always rather leave the audience thinking, keep them guessing, wondering. While I understood—and mostly agreed with—Tony’s knee-jerk reaction against feel-good happy endings with a neat and tidy message, I had less of an appetite for the unresolved. In fact, secretly, I was a bit of a sucker for a cotton-candy Hollywood ending.

Over the years this led to many instances of head butting, and ultimately Tony would always win out. But sometimes he’d surprise me by unexpectedly insisting on a happy ending himself.

Without fail, Tony was completely unpredictable. One of his most important rules was the shows always had to be different each week. Manic depressively and schizophrenically different. Always pushing forward, doing the hard thing, even the stupid thing, as long as it was the different thing. Tony was a big believer in failing gloriously in an attempt to do something interesting, rather than succeeding at being mediocre. “If it’s not interesting, we may as well be working a lunch counter,” Tony said.

It had taken years, but by the time we began Parts Unknown, Tony had essentially assembled his dream production team. It was a Skunk Works where Tony encouraged wild and often inappropriate risk-taking, rewarded experimentation, creativity, and thinking differently, while at the same time publicly shaming traits like consistency and level-headed thinking. Tony advised to “watch movies, read everything you can. Be inspired by what others have done and learn from their mistakes. Stealing is fine as long as you can reasonably suggest it was just ‘borrowing’ in court.”

He challenged the editors, camera people, directors, and producers to come up with crazy shit, to innovate, and he fiercely guarded our freedom to try new stuff and to have fun while doing so. The point wasn’t to be sensational, it was to innovate by fucking with the format.

It was pretty extraordinary thinking about it. Tony helmed a show that had no business being on CNN—on paper at least—but along with the crew we’d all made it their number one–rated program. We might feature a gritty sociopolitical episode in Colombia one week, a sophisticated deconstruction of the world’s best restaurant in Copenhagen the next, then an episode in Tokyo investigating rope bondage subculture, or a trip to Buenos Aires visually inspired by an obscure Wong Kar-Wai film. Watching the shows, you never knew what to expect, and that was the point.

Credit is due to CNN for allowing us the creative freedom to experiment as well as the platform and tools that allowed the show to become what it had always wanted to be. At times it must have seemed to them like one series-ruining idea after another. A couple weeks into the Korea edit, Jesse suggested we cut the episode in reverse.

“Stick with it,” Tony said, instantly latching onto the idea. “Emphasize the reverse storytelling. I will back you up. But don’t let anybody water it down. We begin at the end, no explanation. We tell the story backwards. Let the audience catch up.”

Just like the editors, the directors of photography, Zach and Todd, were always experimenting, always pushing the boundaries of what was creatively as well as technically possible. Ditching our regular Sony F-55s for the Korea episode, they’d conceived of and jury-rigged an entirely new camera system, just for the Korea episode. It allowed for dynamic movement while operating miniature handheld lipstick-sized lenses capable of capturing broadcast-quality footage.

The downside was everyone was tethered to what looked like a Ghostbusters proton-pack, all seventy-five vertebrae-compressing pounds of which was often strapped to me. We moved across Seoul, an unwieldy octopus of cables, cameramen, and delicate and finicky recording equipment. Really, it shouldn’t have worked, but somehow it did. In the edit Jesse took full advantage of the frenetic in-your-face camerawork, cutting the episode split and triple-screen as well as backward. We even played the show’s graphic open in reverse. The Korea episode was just a glorious, glorious mess. 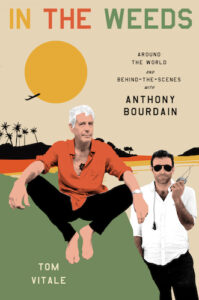 Excerpted from In the Weeds: Around the World and Behind the Scenes with Anthony Bourdain by Tom Vitale. Reprinted with permission from Hachette books. Copyright © 2021 by Tom Vitale. 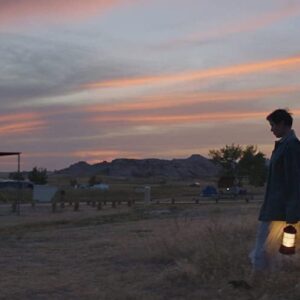 According to my YouTube history, the first time I saved a video to my “Best Vans” list was January 2018. The video was called...
© LitHub
Back to top
Loading Comments...