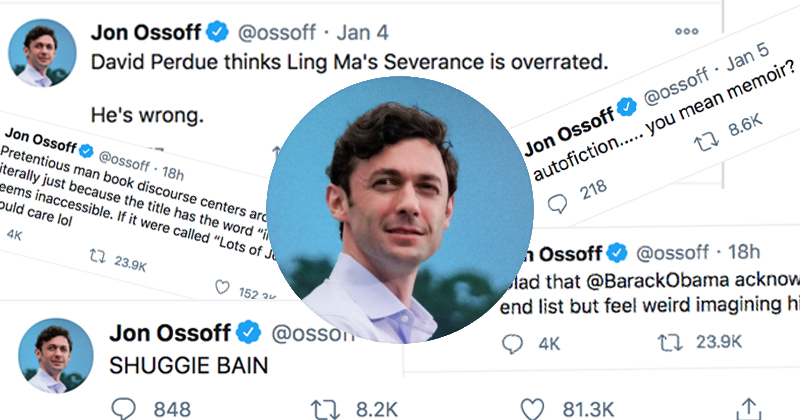 A few literary opinions Jon Ossoff probably has and should definitely tweet about.

This week, we should have had more time to celebrate Jon Ossoff. In the hours before Wednesday turned into a terrible day for democracy, one very good thing happened: Ossoff defeated Republican David Purdue in the Georgia special election runoff, adding his victory to Raphael Warnock’s to give Democrats control of the Senate. His current Twitter presence is typical for a politician, mostly encouraging voting and gesturing toward policy, but like the rest of us, he has a past. After Twitter users discovered Ossoff’s old tweets fanboying about the band Imagine Dragons and anime versions of Les Miserables, I wondered if he had ever tweeted anything that betrayed his taste in books. I searched his old tweets for literary opinions, and it yielded a single result:

So yes, it’s only one tweet, with a paltry . . . zero likes (sorry, Jon), but it’s certainly relevant: blurbing practices are a frequent topic of conversation among literary types.

But it’s slightly insidery, which made me wonder: what other aspects of the literary world does Ossoff have opinions about? Now that he’s a senator, he may feel pressured to keep his messaging narrow, but I want him to know that we want a senator who’s tuned into literary drama. Tweet your literary takes freely, Jon! I mean, wouldn’t it be nice to have a senator who tweets things like this? 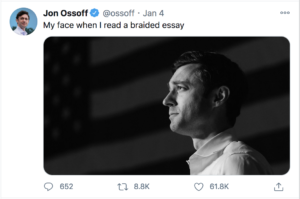 It probably won’t happen, but we can always hope. These tweets are yours for free, Senator Ossoff, and even if you don’t use them, we still like you.