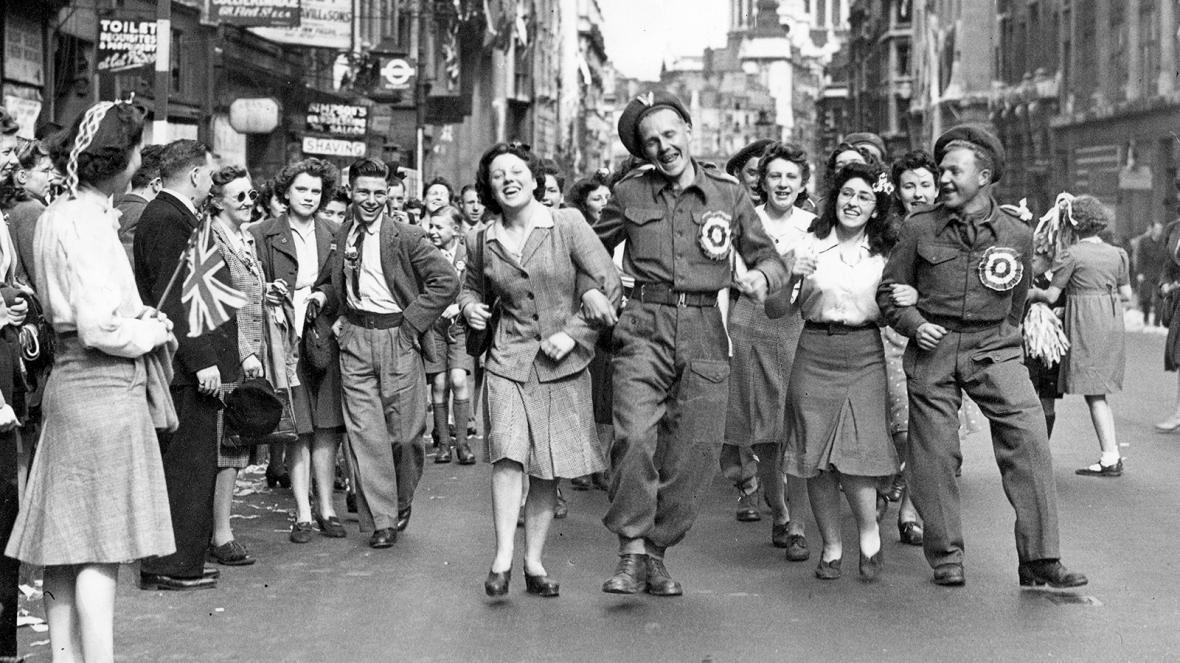 Catherine Grace Katz on Commemorating the End of WWII

Seventy-five years after the end of World War II in Europe, 93-year old Ellie Seagraves is looking back. Then an 18-year-old high school senior, May 8, 1945 was like any other day at boarding school in San Francisco. News of the Nazi surrender came, but with two uncles fighting in the Pacific, the war seemed far from over. Only later, when Ellie saw a list of the war dead in the newspaper, did the emotional significance of VE Day hit her. Listed among those who had died for their country was her grandfather: Franklin Delano Roosevelt. The president, secretly suffering from congestive heart failure as he lead the country through the war, had died on April 12, just three weeks shy of Victory in Europe.

Meanwhile, in London, May 8 meant joyous relief for 15-year-old Jane Portal. With her father fighting in Burma and her mother a nurse in India, Jane lived with her uncle, Minister of Education, Rab Butler. Their family and two young Polish refugees, who had come to live with the Butlers, had huddled in the cellar as German V2 rockets buzzed overhead. VE Day signaled the final all-clear. Jane rushed to the Mall alongside thousands of revelers as the King and Queen waved and Winston Churchill flashed his famous “V” for victory from the Buckingham Palace balcony.

Across Europe, soldiers were still making sense of the last days of the war that had just ended—in some cases abruptly. Twenty-two-year-old American airman Ned Handy had spent a year in the infamous Stalag 17, a POW camp in Austria, after his B-24 was shot down in April 1944. With the Soviets rapidly advancing, the Nazi guards had rounded up 4,300 prisoners for a month-long march across Austria in hopes of surrendering to the Americans. On May 3, Sherman Tanks from Patton’s Third Army had crashed into the forest where Handy and his fellow POWs were sheltering, nearly blowing them to bits before realizing they were Americans. Five days later, Handy and his fellow ex-POWs were in France, listening as Eisenhower addressed them in person.

Ned Handy similarly brushes off the Greatest Generation moniker as “Nonsense!” To him, efforts of today’s first responders match or surpass those of the World War II era.

The 75th anniversary of VE Day should be a day of coming together in celebration and solemn remembrance. But Ned Handy and his wife Margaret will only be able to wave to their daughter from their porch in Cambridge, Massachusetts, reflect with fellow veterans on the telephone, and say a prayer for his 786th Squadron.

Long-planned commemorations on both sides of the Atlantic have been canceled. Britain had moved its bank holiday from May 4 to May 8. Now, instead of services in Westminster Cathedral and a parade on the Mall 1,000 World War II veterans-strong, the streets of central London will be emptier than at any time since the Blitz. The British Royal Legion planned to teach the Lindy Hop in village squares, pausing at 3pm while Churchill’s VE Day speech was broadcast in public spaces across the country. And at 9pm, the Queen was to address the nation, 75 years to the hour of her father’s VE Day address.

In the United States, a cross-conflict remembrance and artillery salute at Gettysburg has been canceled. New Orleans’ National World War II Museum’s events have been suspended.

Even in Russia, the annual Victory Day Parade was designed to put past celebrations to shame. According to Russia’s Tass News Agency, during last June’s G20 summit in Osaka, Vladimir Putin extended invitations to Donald Trump, Emanuel Macron, Angela Merkel, and Xi Jinping. This parade, too, has been postponed.

Organizers are scrambling to adapt plans to honor veterans, now in their nineties. The Churchill Museum in Fulton, Missouri, the site of Churchill’s “Iron Curtain speech,” planned to mark the occasion by ringing the Aldermanbury Bells atop the Church of St. Mary the Virgin. They have now launched a podcasts series. The BBC will air VE Day television and radio programs. The Imperial War Museum is featuring oral histories on social medial and has commissioned contemporary artists to convey the day’s significance. Despite creative efforts, a socially distant 75th anniversary feels a world away from Gettysburg gun salutes and the RAF’s Red Arrows streaking across the sky.

In light of this anniversary, the current global crisis gains new significance. Perhaps the first truly global crisis since the war, younger generations are eager to do their part. Yet, it is difficult not to feel a sense of inadequacy. The idea of passive contribution—of not making the crisis worse—seems insufficient in light of the Greatest Generation’s sacrifices.

With characteristic optimism of that generation, Franklin Roosevelt’s granddaughter Ellie Seagraves dismisses this notion. “I’m not sure I think there is such a generation as ‘the greatest,’” she says, reflecting on the victory FDR never got to witness. “People come together at times when they can unite for an overarching goal—something worth fighting for, or against, as the case may be.”

Ned Handy similarly brushes off the Greatest Generation moniker as “Nonsense!” To him, efforts of today’s first responders match or surpass those of the World War II era.

For Jane Portal, now Lady Williams and the mother of the Archbishop of Canterbury, the response to Covid-19 recalls a lesson shared by her former boss: Churchill. Six years after VE Day, she became Churchill’s secretary at Downing Street. One night, after hours spent dictating his war memoirs, he turned to her and said, “You can hate the Nazis… but the Germans are a remarkable, good people. It is essential, after the end of this war, that we have peace in Europe.” Lady Williams sees this humane spirit around the world today.

And yet, while we unite in spirit to fight for those most at risk, especially members of the Greatest Generation, World War II veterans continue fighting for us. Millions have been inspired by the story of 100-year old British Army veteran, Captain Tom Moore, who walked 100 laps across his garden, raising over $35 million for Britain’s National Health Service in the process.

This May 8, we cannot gather to honor the sacrifices made 75 years ago, but we must carve out a moment to reflect on this day, one that offers hope and solace in these frightening times. Ned Handy encourages American families to listen to Churchill’s wartime speeches, which inspired a stalwart public to endure through a battle thrust upon them, while Lady Williams hopes churches worldwide will ring their bells as a symbol of courage.

Though this 75th anniversary is not what we envisaged, the Queen will still make her address on May 8 at 9pm, and the BBC will lead a global rendition of “We Will Meet Again,” which has as much resonance now as it did then. As we look to the future, we hope we will be able to unite in memory and prayer on August 15—VJ Day—the last, fraught milestone of the war.

And though few of us will hear them in person, the Aldermanbury Bells in Fulton, Missouri will indeed toll. Their sound will be broadcast across America and around the world online as each one of us pauses to give thanks for the resilience of the human spirit—in 1945 and today.

Catherine Grace Katz is the author of The Daughters of Yalta: The Churchills, Roosevelts, and Harrimans: A Story of Love and War, which will be published by Houghton Mifflin Harcourt on September 29.

On First Hearing the Manic Rhythm of My Baby's Heart 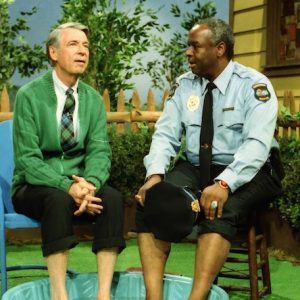 Dear Fred, My guardian angels, spirit guides, ancestors, literary agent, and many friends and acquaintances have urged...
© LitHub
Back to top