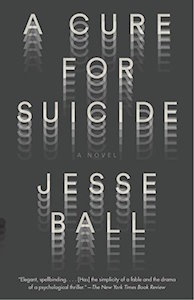 The following is from Jesse Ball’s novel, A Cure for Suicide, now available in paperback. Jesse Ball is the author of fourteen books, including the novels Samedi the Deafness and How to Set a Fire and Why. His prizewinning works of absurdity have been published to acclaim in many parts of the world and translated into more than a dozen languages. He is on the faculty at the School of the Art Institute of Chicago.

A bright light woke him. Something was shining through the window, and his face felt very hot. He rolled over and slowly looked around. He could scarcely manage it, but he looked around. His eyes failed him and drifted shut. He was curled in a quilt with the sheets in disarray.

It was an old woman. Her face creased in a smile.

The claimant squinted and struggled to open his eyes and see her.

She leaned her face in close to his, seeming to etch his features into her mind.

His eyes shut and he slumped in the bed.

With a strength that belied her age, she pushed his body into a sleeping posture, and stepped away.

It was a good situation, thought the examiner to herself. He appears young and strong. He had woken remarkably soon after the shot—only eighteen hours, if the report was to be believed. The examiner had been at this job long enough to know that not all information was correct.

In fact, she thought, often it is wrong on purpose.

She busied herself making some tea. How should she start with this one?

The usual method? Or another approach? Lately she had been favoring the original way, the first way, although she had made her career with her unusual treatments. This time, she would stick to the original method. No speech until the claimant speaks. It was a measurement of sorts. The examiner believed very fervently in measurement.

She set the tea pot down on the table and took a pen and paper off a shelf on the wall.

Received claimant. He appears healthy and ready for treatment.

The two could be seen through the windows of the house, sitting together. He would sit in one chair and she would sit in another. They would sit for long hours, practically motionless.

Through another, they might be seen practicing skills. The old woman would mime the donning of clothes, and help him again and again and again to perform the basic tasks. No matter how he tried, the man could not button the buttons of his shirt. He failed again and again. But, if he was failing, the expression of the old woman seemed to say: this, what we are doing, it is the hardest thing in the world. No one has ever done it. No one until you. And now it has fallen to you to try. Let us try. Let us try again.

One could see them practicing the use of the stairwell, a thing to which one clung with both arms, while lowering leg after leg up and down. It was used for getting to and fro—for going from the top of the house to the bottom.

One could see the man standing in a tub while the old woman poured water over him and scrubbed and scrubbed until he was clean. And soon, he had learned to scrub as well. Soon, he could do it by himself.

If one waited some days and looked through the bottom windows, a different scene might present itself. The two sat at a long table, and blocks with pictures of things were passed back and forth. Large bound sheets full of pictures were shown and shared.

Her patience was the heart of it. She was as patient as a person could be.

The house was a tall Victorian house. That meant it was nicely made, and with good proportions. The rooms had high ceilings. The windows were large and bore many panes within their cavities. The floors had long wooden boards that ran the length of each room. Many were covered with fine carpets. When a person trod on the floors, the boards creaked, and in this way the house was a little bit alive.

The banister was of a swooping brown wood and felt very pleasant under the hand. One could run the hand along it, all the way down the stairs, and then one would be at the bottom. All the way from the top to the bottom.

The bottom of the stairs faced a long narrow hall—and at its end a door that was never open. This door was set with colored glass of every sort. It would be a nice place to lie, to lie flat on the back in the hall and be covered with the colored light.

There were two paintings in this hall—one of a bird with long feathers, and another of a woman who wore clothing that made her look very much like a bird. She was angry, and her face was cruel, and she filled the area around the door with her anger.

Many of the windows in the house had seats in them. The seats were covered in cushions, and a person could sit there as long as they liked. Eventually, the sun might come into your eyes. Or, the sky would become dark. Then it would be time to go to a different place.

The woman who walked about in the house was very old. She was always watching everything that happened, and always listening. She was a comfort because she would be there in an instant to help, or she would wait for hours until the next time she should be there in an instant to help. She wore dark stockings of wool and no shoes. Her clothes were the same color as the wall.

There were many places in the house for putting things. One could put things from one place to another, and they would go back to the place they had been before. This was a sort of game. As many times as one would do it, the things would return. Even paintings that were tilted, or hairs placed under small statues.

Whenever he didn’t have things to do, the old woman found something for him to do. But when he had something to do, she was never there.

The man liked the pants that he wore, and there was a day when he put all the clothes on by himself and came down the stairs by himself, and worked on a thing he had decided to do by himself and ate by himself and it was not until the evening that he saw her. Then they sat on the closed porch and she lit a candle and it was a sort of celebration.

From A CURE FOR SUICIDE. Used with permission of Vintage. Copyright © 2015 by Jesse Ball.

The Devils of Cardona 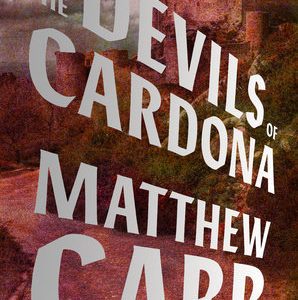 The Devils of Cardona In the early hours of March 20, 1584, Padre Juan Panalles awoke from a drunken stupor to find his servant girl Inés lying...
© LitHub
Back to top