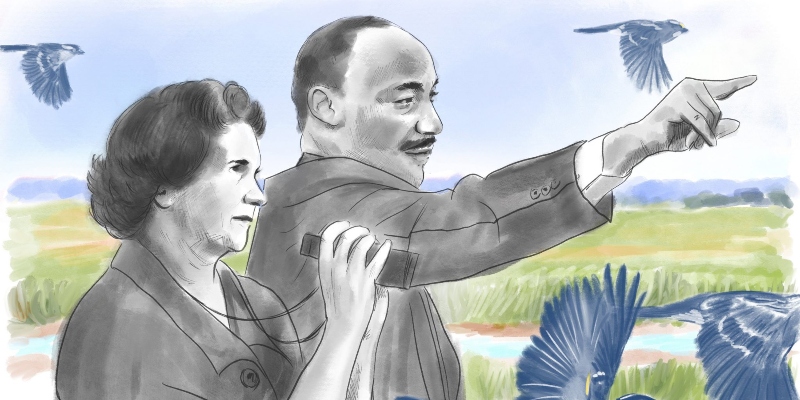 What if Dr. Martin Luther King Jr. and Rachel Carson had met? Imagining an exchange in the year 1964, as the civil rights and environmental movements were forging parallel and increasingly urgent paths into American culture, J. Drew Lanham explores the power and necessity of convergence.

The two movements would’ve seemed disjunct at first glance: Black people demanding equity, justice, and enfranchisement as full citizens in peaceful protest; white people demanding wilderness recognition, clean air, and protection for dwindling species in hearings and op-eds. But looking deeper, both movements, then and now, contain a prevailing desire for a better world built on sustaining good for all. Social justice and the movement to steward and protect nature rise from a similar foundation: a belief in building a better future by being selfless, by sharing and supporting the greater good through sacrifice, by planting the seeds of trees under whose shade you may never sit. These movements share common ground—a clear moral code that (if uncorrupted by ego, profiteering, and power plays) offers a path forward that stretches toward a common cause. King’s “long arc bending toward justice” points to the radical need to sustain moral consciousness at all levels of human integration. This means, by default, care for every living thing: both humans and the environment on which they depend.

Efforts at good beget better when they converge. Yes, birds of a feather may flock together. Yet sometimes the most beautiful aggregations come not from birds of a feather flocking together, but from murmurations of difference, from diverse assemblages moving in a flowing unison that began with an individual deciding to be a part of a greater whole—to wit, the peaceful multiracial protests for racial justice in spring and summer 2020. There was, and is, power in coming together for common cause.

J. Drew Lanham is a birder, naturalist, and hunter-conservationist. He is the author of The Home Place: Memoirs of a Colored Man’s Love Affair with Nature, which received the Reed Award from the Southern Environmental Law Center and the Southern Book Prize, and was a finalist for the John Burroughs Medal. His essays and poetry can be found in Orion, Audubon, Flycatcher, and Wilderness, and in the anthologies The Colors of Nature, State of the Heart, Bartram’s Living Legacy, and Carolina Writers at Home. He is an Alumni Distinguished Professor of Wildlife Ecology and Master Teacher at Clemson University.

Gabriella Trujillo is an illustrator from Southern Colorado. She received a BFA in painting from the University of Colorado and studied at Università degli Studi della Tuscia in Viterbo, Italy. Some of her notable clients include NPR, The Atlantic, and Southwest Contemporary. She currently lives in Northern New Mexico. 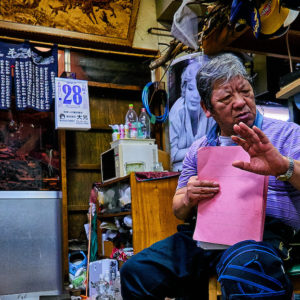 Wakkanai (pop. 33,869) is Japan’s northernmost city. On a clear day, its residents can look across the La Perouse Strait...
© LitHub
Back to top